The drugmaker is breathing a little easier after generic competition for its blockbuster asthma drug hit a setback.

Incoming GlaxoSmithKline plc (GSK -1.01%) CEO Emma Walmsley got a little welcoming gift from the Food and Drug Administration the week she took the reins of the venerable British healthcare company. Mylan (MYL) received a notification that its application for a generic version of Glaxo's asthma drug Advair was not approved. Glaxo's 2017 financials will almost certainly benefit from Mylan's setback, but the reprieve is probably only temporary.

A generic version of Advair has been anticipated for years. In fact, former CEO Sir Andrew Witty liked to point out that he answered questions on the issue for his entire 10-year tenure at the helm. With Advair sales hitting $8.3 billion and 20% of company-wide sales in 2013, Glaxo prepared for the inevitable by taking steps to restructure, diversify, and lower dependence on the drug's sales. 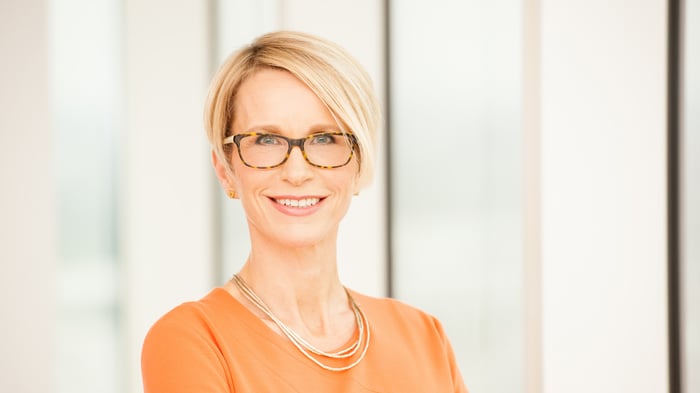 The patent on the drug expired in 2010 and on the inhaler device last year, and it was widely known that Mylan was working on a generic version. For many quarters, Witty reassured analysts that the drug/inhaler combination was actually quite complicated and difficult to copy, but in his last quarterly conference call as CEO this February, he finally presented the view that a generic copy would appear soon and provided financial guidance reflecting a midyear launch.

A major setback for Mylan? Maybe not so much

In its March 1 investor day presentation, Mylan executives expressed confidence in an approval for generic Advair, now named Wixela Inhub, on March 28. But on March 29 the company issued a brief press release that it had received a complete response letter from the FDA. A letter such as this indicates that the agency will not approve the application in its current form. On the surface, this would seem to be a big embarrassment for Mylan and a major break for GlaxoSmithKline.

On the other hand, Mylan executives had walked a fine line between expressing confidence in its submission and allowing for possible temporary setbacks. CEO Rajiv Malik described meeting with FDA officials five times before the submission to make sure "all the boxes were checked." As far as the company knew, the submission met all the criteria the FDA would use for approval. But analysts questioned why, if the company had so much confidence in approval in March, was launch planned for as late as July. Malik had this response:

We had a lot of pre-submission and post-submission engagement. And at this time, anything we know, we share with you, is based on what we see. And there is nothing that we are not confident [about] on our goal action date. But I know it is a complex product, and it will be maybe very ambitious for us to see that we will get it on March 28. So that's why we are giving ourselves that rope.

In other words, Mylan was saying that it thought everything was in order for approval, but due to the complexity of the product, it was allowing for the possibility of needing to address some issues with the FDA by building an extra three or four months of buffer into the schedule.

A small benefit for Glaxo and its investors, in the short term

Without knowing anything about the issue that caused the FDA rejection, it's impossible for investors to know the exact implications for GlaxoSmithKline just yet. In the worst case, the issues get resolved during the three months that Mylan has allowed, and the launch happens in July as planned. Glaxo provided guidance for that assumption, saying that earnings per share would be flat to slightly down for the year in constant currency. If there is no generic Advair launch in 2017 at all, the company would expect core EPS growth to be 5% to 7% in constant currency.

A delay in Mylan's product is only temporary relief, though. Jordanian company Hikma Pharmaceuticals is expecting approval of its version on May 10, and Novartis is known to be working on a competing product as well. And there is every reason to believe that after investing $700 million in its Advair generic, it's only a matter of time before Mylan gets it right.

Mylan's setback created a stir among investors and no doubt brightened the day of the new Glaxo CEO. But any benefit to Glaxo's bottom line will be temporary, and the news is not enough to affect the long-term investment thesis for either company.