The struggling office-supply retailer has put itself up for sale. Is there are reason to buy it?

Staples Inc (SPLS) stock has been on a tear over the last few days amid rumors of a potential buyout. According to The Wall Street Journal, the company is in talks with private-equity firms to sell itself after regulators blew up its planned merger with Office Depot (ODP 1.30%) last year.

The office supply industry has been under pressure for several years, as the internet and digitization of communication reduces the demand for paper, printers, and copiers. Given this, and the 14% run-up in Staples' share price since the news broke, a better question may be: Who would want to buy the company? 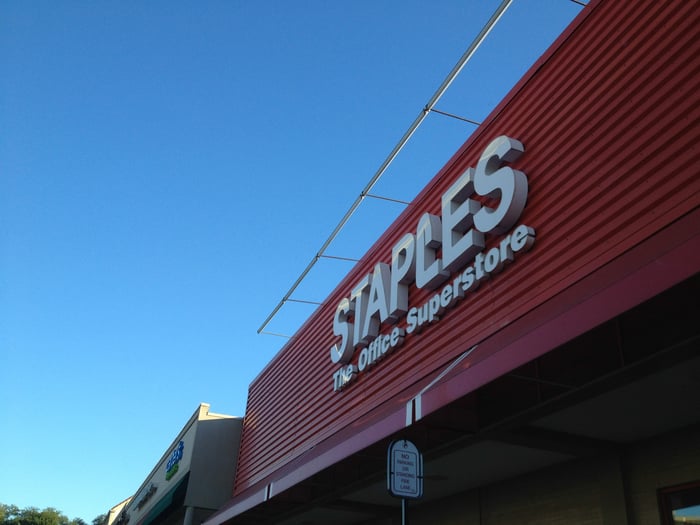 Big-box retailers across the board are facing challenges, but Staples' are particularly extreme. Same-store sales at the office-supply specialist have declined every year since 2007, even as its store count has fallen by a third since 2012.

Sales in the general office-supply retail industry have fallen by half over the last decade, and closing weaker stores and initiatives such as partnering with Workbar to set up coworking spaces inside stores have done little to reverse store performance.

Comparable sales in the company's retail division fell 5% last year, but the division remains profitable, with an operating margin of 4.8% and operating income of $379 million. Profits, however, fell 16% from the year before, and the margin decreased 50 basis points. Like other struggling retail formats, Staples' retail business seems to be in an inevitable decline. The company is likely to close more stores as traffic falls, and already has plans to shutter 70 this year.

As Staples' retail business has declined, its delivery operation has become its key strength. The delivery business contributed about 60% of total sales from continuing operations last year, and though revenue in the division declined 1% last year, operating profits increased 8% to $672 million as operating margin improved 50 basis points to 6.3%.

But continuing to grow those profits will not be easy, as Staples faces entrenched competition from Amazon.com (AMZN -1.44%) and others. And while general e-commerce sales have been growing 15% annually, the office retailer's inability to grow its sales may indicate that it's losing market share.

During its campaign to get its merger approved by the Federal Trade Commission, Staples repeatedly use Amazon as a foil, claiming its competitive threat made a merger with Office Depot necessary and not anti-competitive. At least 38% of Staples' customers overlap with Amazon's, and the democratization of the internet has allowed brick-and-mortar chains like Target and Wal-Mart to build out their own online office retail businesses. In other words, though Staples' delivery business is solid, its future prosperity is not guaranteed.

A good deal for private equity?

Unlike some struggling retailers, Staples is solidly profitable, with free cash flow of around $700 million last year and a non-GAAP net income of $586 million from continuing operations. On a P/E basis, Staples stock was trading under 10 before speculation broke about a buyout.

A private-equity company could accelerate store closures and invest in the delivery business, or just harvest profits from the company, but it's unclear what a viable turnaround strategy would be or how it would profit from a sale or IPO down the road in a declining industry.

Other private equity buyouts in retail haven't gone so well recently. Toys 'R' Us has struggled since a 2005 buyout by several PE firms, and privately owned Payless recently declared bankruptcy, joining a parade of retailers that have done so. J. Crew also finds itself in turmoil after three straight years of comparable sales declines and losing its creative director.

It makes sense for Staples' management to seek a buyer as the company seems to have run out of options for providing sustainable growth and profits. At this point, a sale is not guaranteed -- but without it, Staples investors will again find themselves tied and bound.