Splunk is focusing its sales team on selling its cloud-based subscription software product. This change could drive the stock much higher.

The transition for a software company from selling a perpetual license with a maintenance agreement over to a software as a service (SaaS) cloud-based subscription model can be tricky. Splunk Inc. (SPLK 6.37%) is in the process of making that transition.

The concept of SaaS is easy to understand. If you have ever used Microsoft Corporation's Office product, you may have bought a CD version or a download of the product and installed it on a computer. That software was paid for all upfront and used in perpetuity by the user. The one-time cost for the product is about $150.

The SaaS version of Microsoft Office is called Microsoft 365. It is purchased on a monthly or an annual basis for about $7 per month or $70 per year. This product updates continually over the life of the product so the buyer is always running the latest version of the product with the newest features. 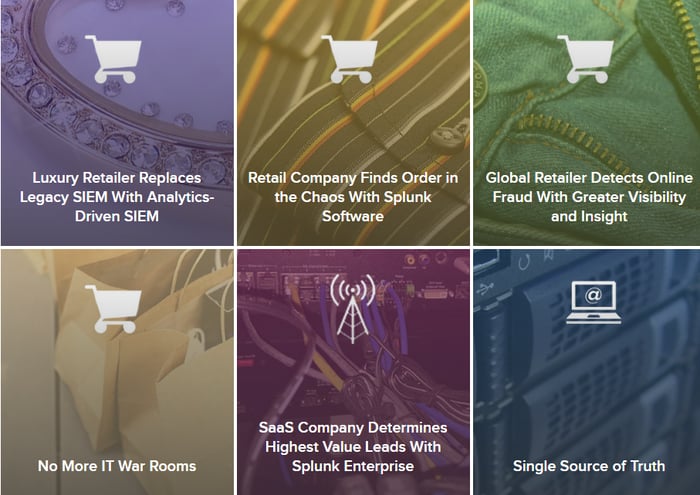 How has Splunk been selling its software?

Although the sales team had the SaaS version of the product available, it was personally more lucrative for them to sell the perpetual license product as customers paid for the product upfront.

Splunk management changed the sales commission plan this year to get the sales force to focus on selling the SaaS product instead of the perpetual license product. This will hurt Splunk in the short term as initial revenue for a SaaS sale is much lower than for a one-time software purchase.

Splunk charges customers per gigabyte (GB) of data that the customer runs through the Splunk platform. The chart below shows Splunk's pricing for one GB of data per day.

Splunk's plan is pure genius, although at first blush you may question the company's sanity due to the postponement of upfront revenue. Look at the chart below and you can see how over time the SaaS offering is more lucrative for Splunk. Additionally, the customer derives the benefit of always having the latest and greatest Splunk software working for them and paying a much lower initial payment to work with Splunk. The company can run the software for the customer in the cloud, saving the customer the IT infrastructure expense of having to host the software.

How have other SaaS conversion stocks done?

Two other companies that have made this SaaS conversion and are in a business comparable to Splunk are Adobe Systems Incorporated and Autodesk, Inc.  Adobe began selling its SaaS product in April 2012, and its stock has more than tripled since then. Autodesk turned completely to the SaaS model in February 2016. Its stock has almost doubled. 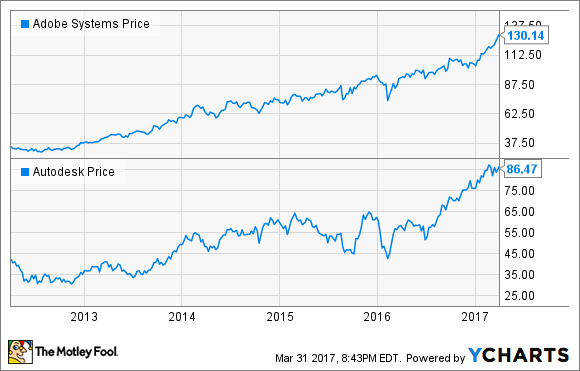 Splunk management has created a goal for the company to reach $2 billion in revenue by fiscal year 2020, roughly double its sales for its just ended fiscal 2017. The company wants to have $1.5 billion of that 2020 revenue to be SaaS, as compared with less than $500 million for the past year -- a tripling of the SaaS sales! 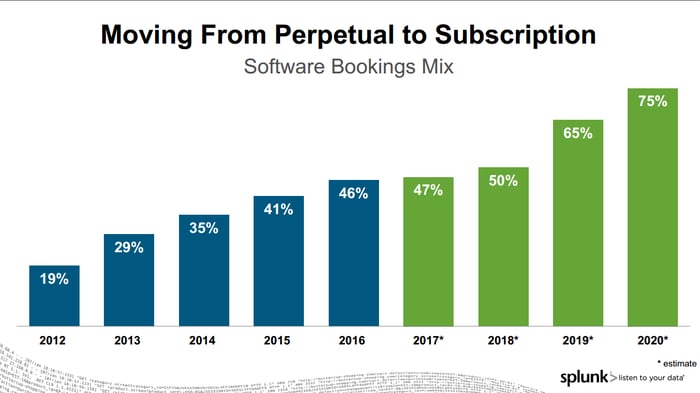 This is the type of change that could drive the stock price higher. The short term may be a bit bumpy as upfront revenue is diverted toward a longer stream of income. That longer stream of income should be quite sticky as customers always receive the newest version of the software. Splunk's pricing also allows the customers to simply add more gigs of data to the plan by increasing the subscription rate, which is good for Splunk.

Splunk's revenue will become more predictable as the migration goes forward and the cost of retaining customers should drop as the customer manages more of their needs over the cloud-based SaaS product. This looks like a win for the customers, a win for Splunk, and a win for shareholders.