Despite Ford and GM selling millions more cars and generating billions more in profits, Tesla's market cap is already larger than Ford's and has rivaled GM's this week.

There are so many reasons to like Tesla, Inc. (TSLA 11.00%). Over the long term, the cost advantage of recharging a vehicle compared to purchasing gasoline is significant, and with instant torque, electric vehicles like the Model S are changing the way we view EVs -- the Model S is arguably closer to a Lamborghini than to an electric golf cart. Tesla's CEO, Elon Musk, is also well known for dreaming up the Hyperloop and creating reusable rockets. What other company leader can boast those things?

But there are also reasons to dislike Tesla, and the chief concern at the moment is simply its eye-popping and mind-boggling valuation.

In fairness, it's difficult to compare Tesla's valuation metrics with that of other automakers because the companies are wildly different and at different stages of growth. Still, the numbers are ridiculous. Tesla's price-to-book and price-to-sales ratios check in at 10.4 and 6.2, respectively. Meanwhile, Ford Motor Company's (F 2.71%) price-to-book and price-to-sales are 1.5 and 0.3; General Motors' (GM 4.03%) are a similar 1.2 and 0.3. Tesla's market capitalization has skyrocketed into the stratosphere to eclipse Ford's at $44 billion, and is currently matching General Motors' near $51 billion -- that's insanity.

The classic retort that Tesla is valued on its future potential is growing a little tiresome. It's as if Tesla is being valued on its potential to sell millions of cars and make profits -- while Detroit automakers that are already achieving that annually and are also investing in EVs are being rewarded with a paltry price-to-earnings ratio of 6. For context, even though it's a tough comparison, if Tesla manages to reach its forward earnings estimates, per Morningstar.com, its forward price-to-earnings is a staggering 160. In other words, Tesla is largely being valued on its ability to become in large part what Wall Street refuses to buy into today. 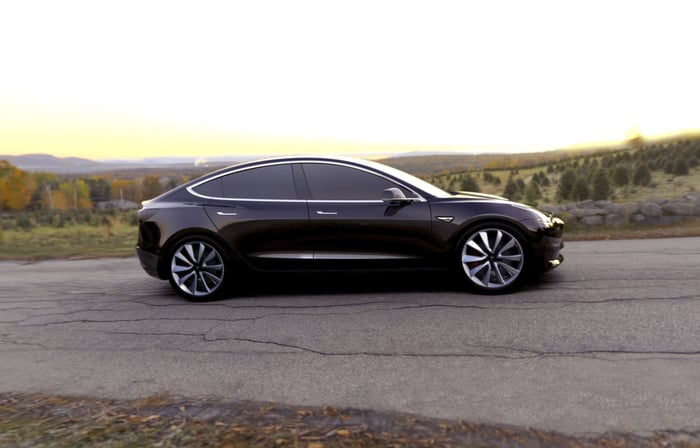 With Tesla's rich valuation, jumping on board now is loaded with risks, as the future has to play out precisely according to plan for investors to get any material value over the next decade. Alex Scherer, director of research for The Motley Fool's investing services, put it perfectly back in September:

We aren't here to invest in charitable causes. These aren't charitable contributions. They're investments with an expectation of return on investment. ... There are some reasons to believe that the challenges that are facing Tesla may be possible to surmount, and the company may be successful, but that the company's shareholders may not find the rewards for taking on that task adequate to the risk they're taking by investing those sums.

Not only does the rich valuation make it more difficult to generate return on investment down the road, but Tesla also has a history of diluting shareholders. Since 2013, Tesla's shares outstanding have increased rapidly, from around 115 million to 163 million, and the dilution has created a noticeable difference in value. Dilution is more of a concern because an increasing stock price is the only way Tesla can return value, since it doesn't dish out a dividend. As Tesla dilutes its shareholders, the gap between the company's growth and the stock price growth can be seen in the graph below. It's necessary to note Tesla's most recent capital raise, however, had less dilution than past capital raises; we'll see if that's a new trend or a one time development. 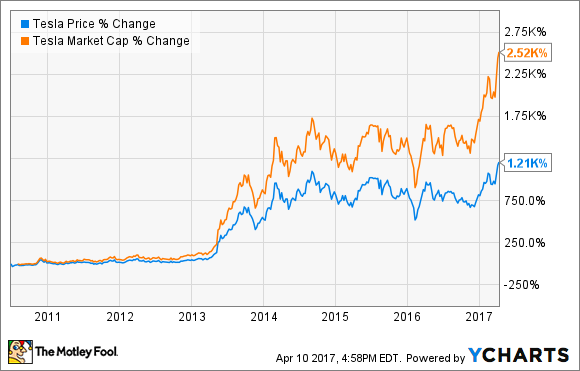 Of course, nobody would sneeze at a 1,210% gain, and Tesla has thus far been a wild success for most investors -- unless you're short the stock. There's a lot to like about Tesla, and nobody could be blamed for enjoying the ride if you bought in years ago. However, at these insane valuations, starting a position in Tesla now carries a load of uncertainty, and a slower-than-anticipated mass adoption of EVs, execution hiccups, executive turnover, excessive dilution, or a lack of capital could bring this valuation back down to earth pretty quickly.