This chipmaker’s dependence on GoPro has been a blessing and a curse over the past four years.

Direct shipments to GoPro, which excluded shipments to GoPro's various ODMs (original design manufacturers), accounted for 19% of Ambarella's revenue in fiscal 2017. Ambarella didn't disclose GoPro's weight in previous years, but it's widely believed that its dependence on the action camera maker has gradually waned.

Why GoPro is a double-edged sword

When Ambarella went public in 2012, many investors saw it as a great supply chain play on GoPro's popular action cameras. Demand for GoPro cameras surged over the following two years, peaking with sales of the Hero 4 Silver and Black in late 2014 and 2015.

But then GoPro stumbled. It followed up its popular Hero 4 Silver and Black cameras with the pricey and poorly received Hero 4 Session. Cheaper Hero cameras, which were aimed at countering new competitors, cannibalized sales of higher-end cameras. GoPro eventually cut the Session's price in half, discontinued the cheaper cameras, and claimed that the Karma drone would become its next hot product. Unfortunately, the Karma's initial launch was marred by an embarrassing recall.

All those problems caused GoPro's revenue to plunge 27% in fiscal 2016 (which ended on Dec. 31, 2016). Wall Street expects its sales to rise just 7% this year. That decline caused Ambarella's fiscal 2017 revenue to fall 2% to $316.4 million, and analysts now anticipate flat growth this year. That abrupt slowdown caused Ambarella's stock to drop to the mid-$30s last May, though it subsequently recovered to the mid-$50s.

Why did Ambarella rebound?

Ambarella doesn't disclose how much revenue comes from those smaller customers, and it's a hard figure to track down. That's because Ambarella sells SoCs to its largest logistics customer Wintech, which sells the SoCs to various ODMs like Foxconn. Those ODMs then design and manufacture goods for OEMs like DJI or Hikvision.

In other words, Ambarella doesn't directly sell its chips to those companies as it does with GoPro. All those orders from Wintech, which were made for other companies, accounted for 60% of Ambarella's revenues in 2017. CEO Fermi Wang declared that SoCs for drones accounted for 10% of its revenues back in 2015, but he hasn't updated that figure since.

During last quarter's conference call, Ambarella CFO George LaPlante declared that the company's biggest headwinds included slowing sales of higher-margin action cameras and declining margins across the low-margin Chinese security camera market. Those impacts can clearly be seen in Ambarella's top line slowdown, and they're also taking a bite out of its operating margins. 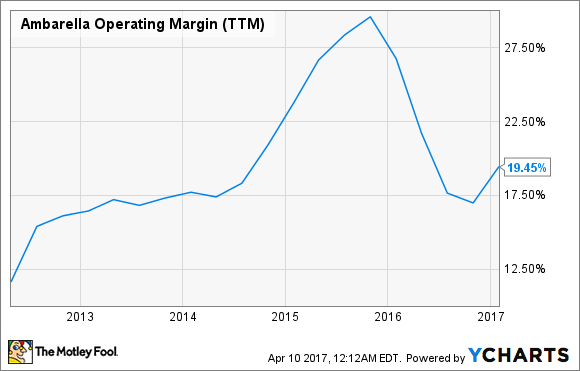 That's why Wall Street expects Ambarella's non-GAAP earnings to fall 25% this year. That decline makes Ambarella's P/E of 32, which is already higher than its industry average of 28, look pricey.

So is Ambarella a good buy today?

Ambarella's image processing SoCs will likely remain "best in class" components for the foreseeable future, thanks to its new 14nm manufacturing process and the introduction of 4K 60fps Ultra HD SoCs.

But its dependence on GoPro and other action camera makers is troubling, it's still struggling against cheaper SoC makers in China, and there's no guarantee that drone SoCs will become popular enough to become a major revenue stream. When we consider that its growth is slowing down and it has a high valuation, it becomes clear that Ambarella remains a risky bet at current prices.