The container shipping giant’s stock has done nothing to sink for three straight years and might not have hit bottom just yet.

Despite delivering steadily rising revenue, bears have mauled Seaspan Corporation's (ATCO -0.07%) stock over the past few years. They've done so by focusing the market's attention on three things: the turbulent shipping market, Seaspan's massive debt load, and earnings issues on the horizon. Here's a closer look at why they believe these issues will continue to weigh on its stock in the near term.

Last year was a brutal one for the shipping industry. Several years of tepid global trade growth finally came to a head after a combination of industry overcapacity, elevated debt levels, and mounting losses resulted in extreme financial distress for many shipping companies. While most were thrown a lifeline to stay afloat, South Korean shipping giant Hanjin sank under the weight of its debt and declared bankruptcy. That event sent a tidal wave throughout the industry, impacting both container leasing companies and container ship owners.

Seaspan wasn't immune to the sector's carnage as the company had to cancel the charters on four vessels. That not only resulted in the loss of future revenue on those boats but the company incurred $18.9 million of additional expenses. That event is one reason why revenue declined in the fourth quarter while full-year cash flow fell versus 2015. 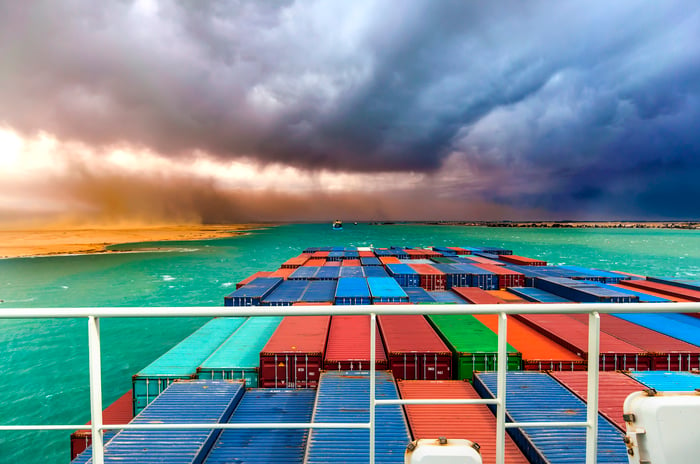 While that event seemed to be the high-water mark of the industry's downturn, bears aren't so sure the worst is over. They see potential trouble at Seaspan's second-largest customer, Yang Ming, which could become the next Hanjin. The shipper has lost more than $1.2 billion since 2009 and has a mountain of debt, taking Hanjin's place as the most indebted shipper at the moment. While the government of Taiwan has stepped in to support the company and rival Evergreen, that doesn't mean it'll survive, which is a major concern for Seaspan because it could lose a boatload of future contracted revenue.

Another issue bears point out is that Seaspan is carrying around $3.4 billion of debt, which is a big load for a company with $5.6 billion of assets. Because of that, the company has taken steps to shore up its balance sheet, including raising $600 million of equity capital last year. Furthermore, it recently reduced its dividend to increase its financial flexibility.

That said, bears don't think those moves are enough because the company has several newbuild ships scheduled for delivery over the next year, representing a rather large capex liability. While it hasn't had any problems accessing outside capital to finance newbuilds in the past, the concern is that it might have problems in the future given the continued stress in the shipping sector. That could force it to pay a high cost for new capital.

Yet another worry for bears are earnings problems on the horizon. For example, while it leases the bulk of its fleet under long-term time charters, it does have some renewal issues that could weigh on earnings. One of the problems is with its smaller Panamax fleet, which operates under short-term contracts and supplies about 6% of its revenue. Due to the weakness in the shipping sector, Panamax spot rates are currently at record lows and below breakeven levels. As a result, Seaspan has had to scrap several older ships that were no longer profitable.

Also concerning is the fact that several legacy charters will be rolling off at lower levels, which will weigh on earnings. While the company does have some newbuilds still in the pipeline, those ships will merely replace the lost revenue instead of adding to them. Because of that, many analysts don't see any reason to own the stock at the moment. Instead, most favor rival Costamare (NYSE: CMRE) because it has clearly visible earning growth on the horizon due to its upcoming newbuilds and steadier near-term contract backlog. Costamare also has a stronger balance sheet, giving it more financial flexibility to make vessel acquisitions to add incremental earnings.

While Seaspan also has its eyes on acquisitions, and has already completed a couple of smaller deals, those vessels only replaced those it scrapped. As a result, bears think it could be quite some time before the company's earnings stop sinking.

Even though I'm a long-term bull on Seaspan -- I believe its business model can deliver big dividends in the future -- bears certainly have the upper hand at the moment. That'll likely remain the case until either the shipping industry shows signs of improvement or Seaspan shores up its balance sheet and contract backlog. That said, while I'm watching these issues closely, I'm not ready to throw in the towel just yet because the company has the potential to deliver a growing income stream when industry conditions improve.