The home robotics company jumped following the launch of its new app. Here's why.

Shares of iRobot Corporation (IRBT -0.72%) rose 15.9%% in the month of March, according to data provided by S&P Global Market Intelligence, after the home robotics specialist unveiled compelling new features for its cloud-connected robots.

iRobot's climb last month didn't happen all at once. Rather, the start of its upward trend coincided with the announcement of a new version of its HOME app, as well as plans to incorporate Amazon's Alexa voice control into its robots in the near future. 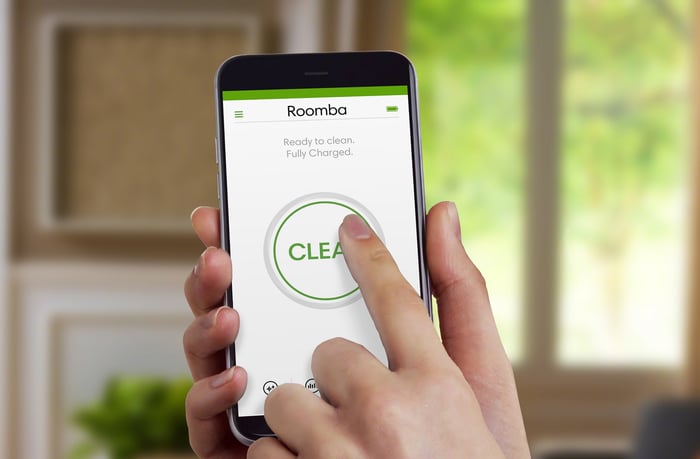 More specifically, owners of connected Roomba models can now display "Clean Map reports" on their smartphones, including visual post-cleaning maps and other useful information about the robot's cleaning performance. That information ranges from total square footage cleaned to Dirt Detect events, charging time, and errors or notifications thrown by the Roomba.

In addition, iRobot will launch a new Alexa skill for Roomba in the U.S. before the end of the second quarter, allowing Roomba owners to control their robots with voice commands like "Alexa, ask Roomba to begin cleaning."

These might seem like small incremental improvements. But as I noted at the time, iRobot CEO Colin Angle called them "exciting next steps toward our vision of an ecosystem of home robots that work collaboratively and further enable the smart home."

That's a not-so-subtle hint that iRobot has much bigger plans for home robotics going forward. The company could leverage the early success of its floor-mopping Braava jet robots to work in tandem with Roomba, for example. And this could result in compelling differentiating features for iRobot's upcoming lawnmower product, which FCC documents revealed was in the early stages of development in 2015.

It also helped that shares of iRobot initially fell after its stellar fourth-quarter 2016 report in February. So when iRobot gave skittish investors more reasons to be optimistic about its future, it was no surprise to see iRobot stock resume its climb last month.

3 Charts That Might Have iRobot Shareholders Going in Circles
411%