Please ensure Javascript is enabled for purposes of website accessibility
Log In Help Join The Motley Fool
Free Article Join Over 1 Million Premium Members And Get More In-Depth Stock Guidance and Research
By Steve Symington - Apr 11, 2017 at 7:00AM

The auto-driving vehicle technology company is being acquired. Here's what investors need to know.

Shares of Mobileye N.V. (MBLY) jumped 34.5% in the month of March, according to data provided by S&P Global Market Intelligence, after the company agreed to be acquired by Intel (INTC -0.79%).

More specifically, on March 13, 2017, Mobileye revealed it had entered a definitive agreement under which Intel will acquire all of its outstanding issued and ordinary shares for $63.54 per share in cash -- a more than 34% premium to Mobileye's closing price the day before the announcement. That also represented an equity value of roughly $15.3 billion and an enterprise value of $14.7 billion. 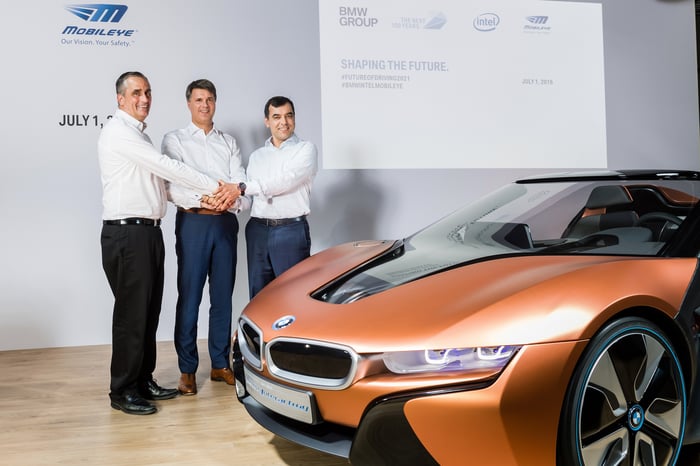 "The combination is expected to accelerate innovation for the automotive industry and position Intel as a leading technology provider in the fast-growing market for highly and fully autonomous vehicles," the companies stated at the time. "Intel estimates the vehicle systems, data and services market opportunity to be up to $70 billion by 2030."

Of course, 2030 is a long way off. But in the meantime, Intel anticipates the acquisition to be accretive to its adjusted earnings per share and free cash flow immediately after the deal's expected close within the next eight months or so -- that is, assuming the transaction receives the necessary shareholder and regulatory approvals between now and then.

With shares of Mobileye currently trading at less than 3% below the agreed acquisition price -- and assuming waiting to sell won't result in more favorable long-term capital gains tax treatment -- I think investors would do well to take their profits off the table and put them to work elsewhere.