This stealth e-commerce play has an intriguing history -- and an even more exciting future.

Shopify (SHOP -0.43%) is taking the world by storm. The cloud-based, multichannel commerce platform is enjoying torrid growth, as it's rapidly becoming the partner of choice for hundreds of thousands of businesses across the world.

Here are some interesting facts about this hard-charging company of which you may not be aware -- and that may help you decide if Shopify deserves a place in your portfolio. 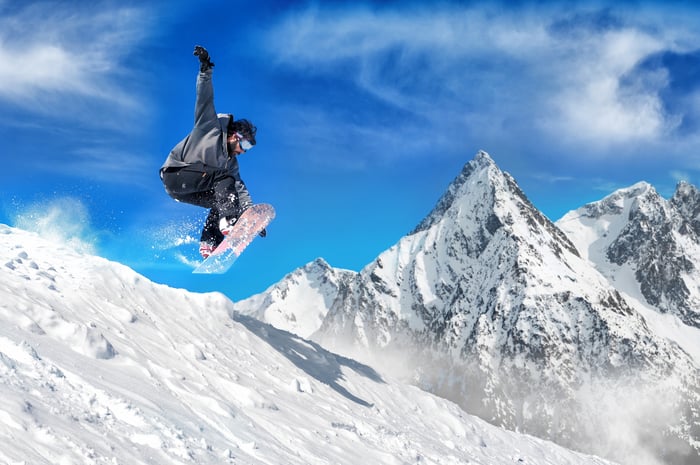 1. It all started with snowboards

Shopify began in 2004 as an online store to sell snowboard equipment. But when co-founder Tobi Lutke couldn't find any e-commerce software that adequately met his needs as a new entrepreneur -- most of the products on the market at the time were designed for large corporations and were expensive, overly complex, and inflexible -- Lutke decided to build his own software.

It didn't take long for Lutke to realize that software was a much better business than snowboards -- and in 2006, Shopify was born.

Lutke is not your typical MBA-wielding CEO. In fact, he dropped out of high school when he was 16 to pursue a computer-programming apprenticeship, where he came to understand that "experiencing and learning things quickly is the ultimate life skill."

Lutke's ability to learn on the fly would later prove invaluable, when Shopify co-founder and then-CEO Scott Lake decided to leave the company in 2008. Lutke, who up to that point had been totally focused on product development, was forced to immerse himself in the financial aspects of Shopify's business when he took over as CEO. He learned quickly, and apparently, he's doing quite well. Among current and former Shopify employees, says review site Glassdoor.com, 92% approve of Lutke's performance as CEO, and 85% would recommend the company to a friend.

Shopify is one of very few businesses that went head to head with the mighty Amazon.com (AMZN -0.07%) -- and won. After originally competing with Shopify, Amazon decided in early 2015 to close down its Amazon Webstore service and recommended that its merchants migrate to Shopify's platform.

In December 2016, Shopify made its integration with Amazon generally available to its army of merchants. The connection gives Shopify storeowners seamless access to the millions of customers searching for products to buy on Amazon. The deal thereby fortifies Shopify's position as a one-stop, multichannel commerce platform that allows its merchants to "sell anywhere their customers buy." It also makes Shopify's stock an under-the-radar way to profit from Amazon's staggering growth.

More than 377,500 merchants have flocked to Shopify's platform. Collectively, they've sold over $29 billion worth of goods. Those are impressive figures, and they get the majority of the attention when Shopify reports its quarterly results.

Yet an often-overlooked driver of Shopify's success is the emergence of its powerful ecosystem. There are now more than 1,400 apps in Shopify's app store that bolster its own offerings with additional tools for sales and marketing, social-media management, shipping, inventory control, accounting, customer service, and more. Together, they help to make Shopify "the only platform you need to build your empire."

Despite the company's remarkable success, Shopify remains a relatively unknown brand to consumers. That's all a part of the plan, as the company explains in its IPO registration statement:

Chances are that you've already bought products through stores that use Shopify and you didn't even realize it. ... as a brand, we are virtually invisible to consumers. This is by design, as our job is to make our merchants look their very best in every interaction they have with consumers.

Shopify understands that it's more important to make its merchants look good than to attempt to build a popular consumer-facing brand. That's because, as its merchants grow their businesses, Shopify can scale its own business alongside them.

Shopify priced its initial public offering at $17 per share back in May 2015. With shares now trading at around $70 each, Shopify's stock has already delivered returns of more than 300% to early investors.

Yet you didn't have to get in at the IPO to see gains of this nature. Shopify's stock price pulled back sharply in early 2016 along with the market as a whole, dropping below $19 per share in January and again in February. Investors who pounced on those opportunities are sitting on gains of approximately 270% today.

7. Long runways for growth still ahead

Despite its tremendous ascent, Shopify is still very early in its growth cycle. In its IPO filing, Shopify noted that approximately 10 million merchants with fewer than 500 employees operate in its key geographies, and approximately 46 million such merchants worldwide. With fewer than 400,000 merchant customers today, Shopify has less than 4% penetration in its core markets and less than 1% of its total addressable market.

Moreover, as my colleague Brian Withers points out, with average annual revenue per merchant of $1,243 in 2016, Shopify's global market opportunity could reach as high as $57 billion. For a company with total revenue of only $389 million last year, this type of jaw-dropping growth potential offers investors the prospect of exponential gains in the coming years.