Please ensure Javascript is enabled for purposes of website accessibility
Log In Help Join The Motley Fool
Free Article Join Over 1 Million Premium Members And Get More In-Depth Stock Guidance and Research
By Joe Tenebruso - May 28, 2016 at 12:05PM

These businesses could grow exponentially in the years ahead.

When it comes to growth investing, market opportunity is a particularly important metric. The size of the market in which a business competes -- both now and in the future -- ultimately will determine how large a company can hope to become. And investing in a company that's early in its growth curve can lead to years of handsome profits as it fulfills its growth potential.

That's why getting in early is key. Those who can identify these opportunities before other investors do stand to make a fortune. Read on to learn about two excellent companies with massive growth potential still ahead.

Shopify (SHOP 0.54%) is quickly becoming a force within the e-commerce megatrend. The provider of cloud-based commerce solutions now serves more than 275,000 businesses in 150 countries, generating $17 billion in sales.

Shopify helps users sell their goods across multiple channels, including online retail marketplaces such as Amazon.com and eBay, as well as stand-alone websites. Shopify is also one of the first platforms that gives users access to the "buy" button features on major social-media giants such as Facebook, Twitter, and Pinterest.

In addition, Shopify provides crucial back-office-type services such as sales tracking, payment processing, and inventory management. It's a comprehensive commerce platform that, along with a growing list of integrated third-party apps, provides users nearly everything they need to run their businesses.

Shopify's pricing strategy helps to further set it apart from its rivals. Beginning at only $9 per month, Shopify's core services are affordable for nearly all entrepreneurs. Additional pricing tiers and service packages are available to users as they scale their sales and profits, all the way up to an enterprise level suite of capabilities currently being used by major corporations such as Tesla and Anheuser-Busch InBev. Merchants never need to change platforms, and Shopify is able to retain its largest and most successful users.

Best of all, Shopify has only just started to fulfill its massive growth potential. The company's gross merchandise volume -- basically, the total dollar value of orders processed on the Shopify platform -- surged 105%, to $7.7 billion in 2015. Yet that figure is only a tiny fraction of the estimated $1.7 trillion in global online sales that occurred last year.

And with about 275,000 merchants currently using its platform, Shopify still has a long growth runway ahead as it pursues the 10 million merchants with fewer than 500 employees in its key markets. With so much growth still to come, Shopify is a business that investors may wish to consider. 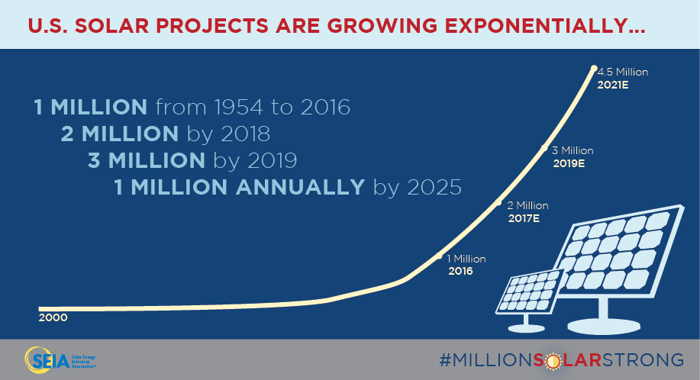 Thanks to rising electric utility rates, falling solar panel costs, and favorable tax credits, solar-power usage has exploded here in the U.S. It's a trend that's likely to continue for years -- and possibly even decades -- to come, with one company standing to benefit more than any other: SolarCity (SCTY.DL).

Yet even after this explosive growth, there are only about 1 million homes that have solar panels installed in the U.S. That's just a small fraction of the 38 million homes in SolarCity's key markets, and more than 90 million single-family homes across the country. Even if only half of these houses are a good fit for solar-panel installation, it still leaves a massive amount of potential growth ahead for SolarCity.

In addition, SolarCity is making a push to take share in the commercial solar market. The company made headlines in March when it announced a deal to install solar systems on up to 100 Whole Foods stores across the country. With only about 1% of the 5.6 million commercial buildings in the U.S. currently using solar power, you can expect SolarCity to book many more deals like this in the coming years.

Looking even further ahead, the International Energy Agency thinks that solar -- although currently accounting for less than 1% of the world's electricity -- will be the world's largest energy source by 2050. That's one of the reasons CEO Lyndon Rive thinks SolarCity could become the nation's largest energy provider by 2025. If you agree, you may want to consider buying shares in SolarCity today as a means to profit from its incredible growth potential.