Just because a company's products are popular or well liked does not necessarily mean that the company's stock is always a great investment. Sometimes, those same great, inventive businesses or products can struggle with profitability, changing market conditions, or increasing competition. Many companies can overcome those issues and become market-crushing stocks, while others can sometimes just end up a black hole in your portfolio.

We asked three of our contributors to highlight a stock or industry that they see as an investment with the potential to be toxic for one's portfolio. Here's why they think that organic grocer Whole Foods Market (NASDAQ:WFM), solar stocks such as SunPower (NASDAQ:SPWR), First Solar (NASDAQ:FSLR), and SolarCity (NASDAQ:SCTY.DL), and action camera maker GoPro (NASDAQ:GPRO) fit the bill.

Organic competition takes a bite out of this grocer

Evan Niu, CFA (Whole Foods Market): This organic grocer has been a longtime favorite among many Fools, dating back to the original Motley Fool Stock Advisor recommendation from 2002. Co-CEO John Mackey also sits on our board of directors. But shares of Whole Foods have struggled for the past three years as rivals are jumping in to expand their organic offerings at lower price points. While the company was once able to command pricing power and charge premium prices, earning the unfortunate nickname "Whole Paycheck," that pricing power seems to have evaporated amid escalating competition. 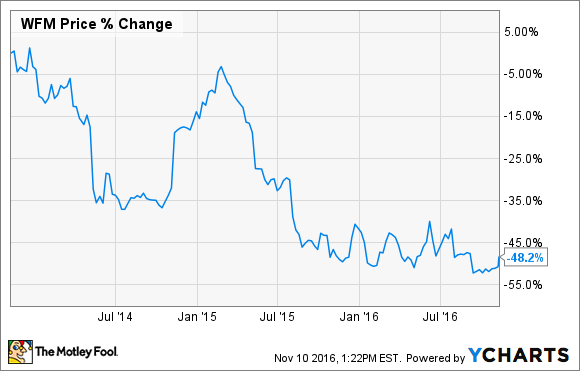 Co-CEO Walter Robb ( who will transition out of the role at the end of the year, making Mackey the sole CEO) acknowledged in the last earnings release that "food retailing is evolving at an incredibly fast pace." While Robb naturally sees this as an opportunity, there's also a downside if Whole Foods is unable to keep up with changing consumer preferences. The results don't inspire a lot of confidence, either, as comparable-store sales fell 2.6% last quarter, driven in part by transactions falling 4.2%.

Whole Foods is still a great business with many loyal customers, but from an investing perspective, the stock may not perform particularly well going forward, as the competition isn't going anywhere anytime soon.

A stall in 2017 could put pressure on solar stocks

Tyler Crowe: Even before Donald Trump was elected president and investors started to worry about some of his views on alternative energy, companies in the solar business were not looking forward to 2017. The tax incentives for solar production and investment that have helped the industry get off the ground were set to expire at the end of 2016 -- until those credits were extended in late 2015. While this is good news over the long term, many utility companies and others had built plans years ago under the assumption that those tax credits would expire this year, so there isn't much activity planned in 2017.

For solar panel producers such as SunPower and First Solar, the lack of utility work is likely to lead to losses in 2017, so most of them are looking to generate as much cash as they can today and stash it to ride out this tough time ahead. At the same time, residential solar installers such as SolarCity are trying to pivot toward systems that include energy storage that can skirt these net metering rules. As of right now, energy storage systems are a harder sell because the economics are not as great as net metering was for solar.

For any investor either currently invested or interested in this industry, the struggles of 2017 will likely mean that solar stocks will be a major drag on a portfolio. For anyone who doesn't have the patience to wait out this tough time, an ill-timed sale could lead to some big losses.

Matt DiLallo (GoPro): Action-camera maker GoPro thrives on the hype its users create when they capture amazing moments with its cameras. That hype creates a desire for others to capture similar moments of their own -- which they can do if they purchase GoPro cameras and accessories. That said, despite all this hype, GoPro is struggling to make a profit these days because of elevated expenses and stiff competition within its still rather niche market.

GoPro has hopes of returning to profitability soon by cutting costs and launching new products to refresh the hype cycle. Unfortunately, it has struggled to launch several of its newest products. For example, it recently recalled its long-delayed Karma drone after several of the devices lost power when in use, and it ran into production issues with its HERO5 Black product. These issues will have an impact on the company's ability to meet demand during the crucial holiday season and could cause it to miss its lofty goals.

While GoPro created the action-camera niche that it currently dominates, the niche hasn't grown quite as large as the company had hoped. Worse yet, competition within its market is growing while the company is struggling with critical new product launches. This combination could cause it to continue losing money and market value, which is a toxic combination for any portfolio.