Please ensure Javascript is enabled for purposes of website accessibility
Log In Help Join The Motley Fool
Free Article Join Over 1 Million Premium Members And Get More In-Depth Stock Guidance and Research
By Maxx Chatsko - Feb 15, 2015 at 10:37AM

If you think organic farming is the most sustainable form of agriculture, then you need to see these numbers from the USDA.

You've heard this stat before, but it's worth mentioning again: The United Nations has estimated that food production will need to nearly double from 2008 levels by the year 2050 to feed the world's growing population (nearly all from the least developed nations) and make up for shrinking agricultural land. That means that to boost yields and combat pests, farmers will need to increasingly rely on technology ranging from high-yield seeds to agricultural biotechnology to even the Internet of Things.

While progress is being made, consumers in many wealthy nations are demanding that their food be grown using organic farming principles. At a time when the world cannot falter on the path to increasing its food production, these habits can have severe consequences. Some consumers rationalize their purchasing decisions by claiming the health benefits of organic food (which have been thoroughly debunked), the avoidance of health risks associated with genetically modified foods (with which the scientific consensus disagrees), or the more environmentally friendly and sustainable approach to agriculture that organic farming enables.

The last argument might seem the most plausible. After all, organic farming forbids the use of synthetic pesticides, biotechnology, and many (but not all) pesticides. Unfortunately for Whole Foods Market (WFM) shoppers, the argument doesn't quite hold up, according to shocking numbers compiled by the U.S. Department of Agriculture.

Ouch, organic!
Is organic farming really the most sustainable form of agriculture? To answer that, we need to define the word "sustainable" from an environmental point of view. Go ahead, take a minute to think about what the word really means. I'll wait.

If you cheated and looked in a dictionary, then you would have found something similar to this:

That would mean that the most sustainable agricultural methods would maintain natural resources, or in this case, land, to which all other natural resources -- water, soil, energy input, fertilizer use, and the like -- are dependent upon. To use land and derivative natural resources as sustainably as possible requires using the least input to produce the most food. So, how does organic farming stack up?

Not so well, according to numbers from the USDA. When the department logged yield data (food produced per acre) from various crops grown organically, government researchers found that they severely underperformed the same crops grown with more traditional farming methods.

It's important to note that "traditional farming methods" means the crops were aided by synthetic fertilizers and approved pesticides, but not necessarily biotechnology (for instance, genetically modified wheat is not grown commercially). Will the world really be better off with organic farming if it requires substantially more land to produce the same amount of food? The table above doesn't scream environmental stewardship to me.

So, that's it, game over for organic food investments, right? Not quite.

Wait, there's a catch?
Organic farming may not enable comparable yields to traditional farming, but that doesn't mean investors are left without opportunities. The trend in organic food sales hints that opportunity does indeed exist, even if it's fueled in large part by outsize marketing budgets, a fundamental information gap, or, worst of all, misinformation. 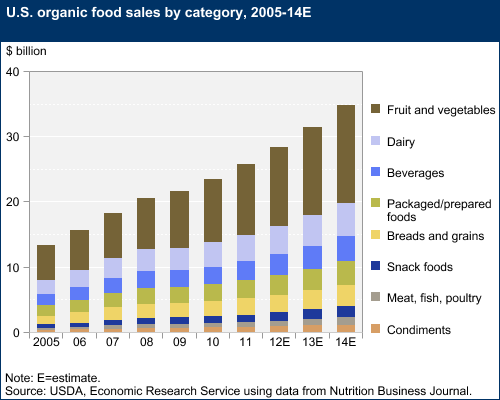 Whole Foods Market embodies the trend perfectly, as the company's stock price, annual revenue, and annual earnings per share have roared higher in the same period. 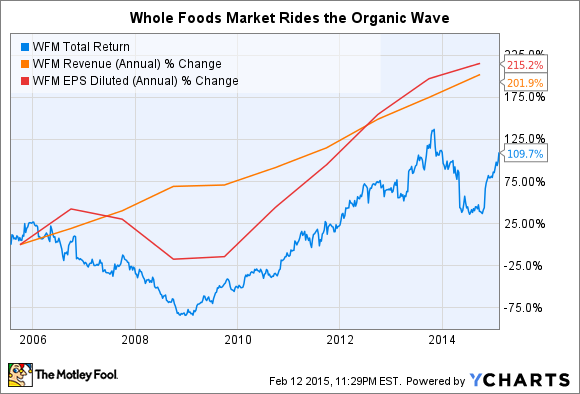 The profits and returns at Whole Foods Market may be the only organic yields capable of rising in the future, considering the farming method prohibits the use of some of the most proven yield-boosting technologies. However, the trend is unlikely to stop anytime soon, as more and more groceries, restaurants, and farmers take advantage of consumer habits. Even the USDA is joining in after it recently allocated $13 million to help small organic farmers offset the cost or organic certification, which could fund over one-third of application costs.

Organic farming may never feed the world, but it appears to have a role in the future of farming. Congratulations, America. You get to keep your organic food.

John Mackey, co-CEO of Whole Foods Market, is a member of The Motley Fool's board of directors. Maxx Chatsko has no position in any stocks mentioned. Check out his personal portfolio, CAPS page, previous writing for The Motley Fool, and follow him on Twitter to keep up with developments in the synthetic biology field.

The Motley Fool recommends and owns shares of Whole Foods Market. Try any of our Foolish newsletter services free for 30 days. We Fools may not all hold the same opinions, but we all believe that considering a diverse range of insights makes us better investors. The Motley Fool has a disclosure policy.

Chevron Dives Into Shale While SolarCity Teams Up With Whole Foods