Time to focus on monetization.

Facebook (META 7.19%) continues to crush it on numerous fronts, and the social network has just reached yet another milestone.

Messenger chief David Marcus announced today that Messenger now has over 1.2 billion monthly active users (MAUs). That's an insane user base for the messaging service, and does not include any of Facebook's other properties like WhatsApp, which incidentally also hit the same 1.2 billion MAU threshold two months ago. There is inevitably some overlap, since Messenger and WhatsApp have distinct strengths and value propositions, but the company clearly has a massive user base across its two messaging services.

Messenger has doubled in two years

The news comes after Facebook said that Messenger hit 1 billion MAUs last July, which was just a few months after the 900 million milestone. But if you zoom out a little, Messenger had just 600 million MAUs in March 2015 -- the user base has doubled over the span of two years. 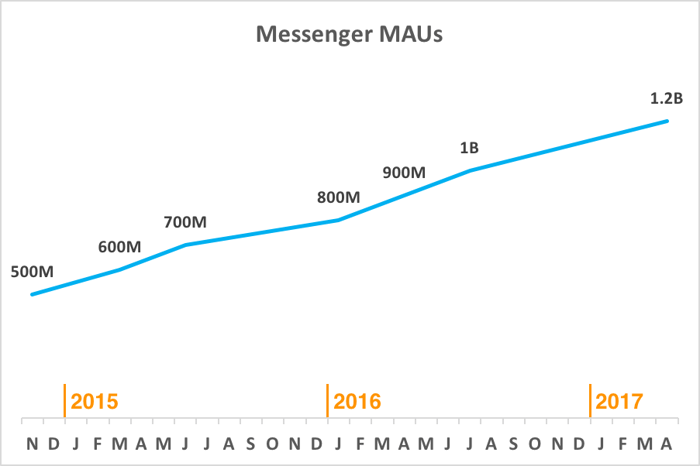 That's a pretty impressive accomplishment, and smaller social media platforms would kill for that kind of growth.

With both services reaching critical mass, it's now time for Facebook to turns its efforts toward monetization. CEO Mark Zuckerberg famously said that ads are not the right approach for WhatsApp, but somehow mobile ads will make sense for Messenger? 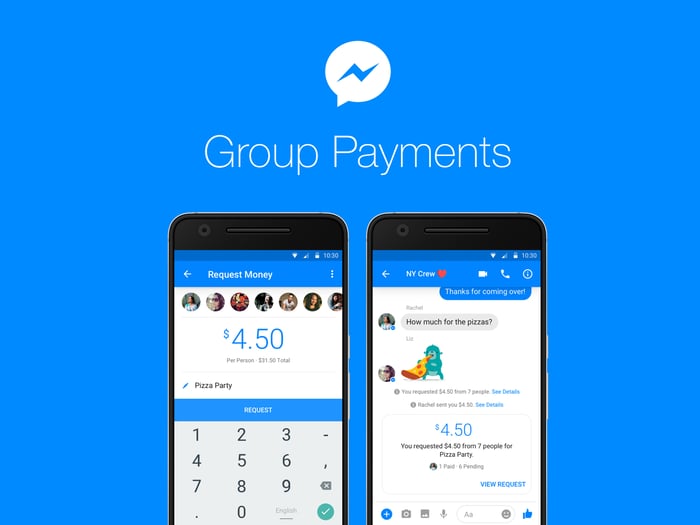 Messenger added group payments just yesterday, expanding the service's ability for users to send money back and forth. This feature has been around since 2015, but only available between two people. But it's not like Facebook will be taking a cut of any payments that are processed, nor would users be willing pay any such fees. Marcus recently told Recode that the revenue model for Messenger will likely be more focused on -- you guessed it -- ads: "We're not going to take cuts of payments. The one thing we traditionally do, and is a decent business for us, is advertising. So we'll continue focusing on that."

However, ads are tough to pull off in a messaging service, which was largely why Zuck Dawg was averse to that approach for WhatsApp. For now, there are only two ad formats: News Feed ads that send people to Messenger in order to interact with a brand, and ads inside of Messenger's inbox. Facebook is reportedly also working on WhatsApp for Business, which similarly hopes to connect users with brands (with the brands paying for the privilege).

Many popular messaging apps in Asia have seen success by facilitating payments and e-commerce, but this approach hasn't really worked well in the West.

The effort to ramp monetization will be tricky, and Facebook will need to keep experimenting until it finds a way to balance the user experience with its monetization needs. There is another, rather large wrinkle, though. Facebook is still carrying around a massive amount of goodwill on its balance sheet related to the WhatsApp acquisition, and if its monetization efforts fail, it would need to eat an awful lot of that. Messenger is not exposed to the same risk since it was developed internally.

So yeah, it's time to focus to monetization.