Please ensure Javascript is enabled for purposes of website accessibility
Log In Help Join The Motley Fool
Free Article Join Over 1 Million Premium Members And Get More In-Depth Stock Guidance and Research
By Matthew DiLallo - Apr 12, 2017 at 11:00AM

The driller has significantly underperformed its peers over the past year.

Apache's (APA 1.29%) stock, down more than 15% since the beginning of the year, is off to a rough start in 2017. It hasn't done much better over the past year either, only rising about 5%. That represents significant underperformance versus similarly sized rival drillers Pioneer Natural Resources (PXD 0.39%) and Devon Energy (DVN 0.00%), which are up more than 30% and 45%, respectively, over that same time frame. That outperformance comes despite the fact that Apache has just as much going for it these days, which is something investors appear to be overlooking.

While Apache, Devon, and Pioneer are similar in size by enterprise value at around $30 billion, these companies are quite different when it comes to the size and location of their oil and gas production. Devon currently leads the pack, producing an average of 537,000 BOE/d (45% oil) in the fourth quarter of last year, followed by Apache at 421,000 BOE/d (51% oil) and Pioneer at 242,000 BOE/d (59% oil). Meanwhile, both Devon and Pioneer get 100% of their production from North America while Apache also produces from the North Sea and Egypt. 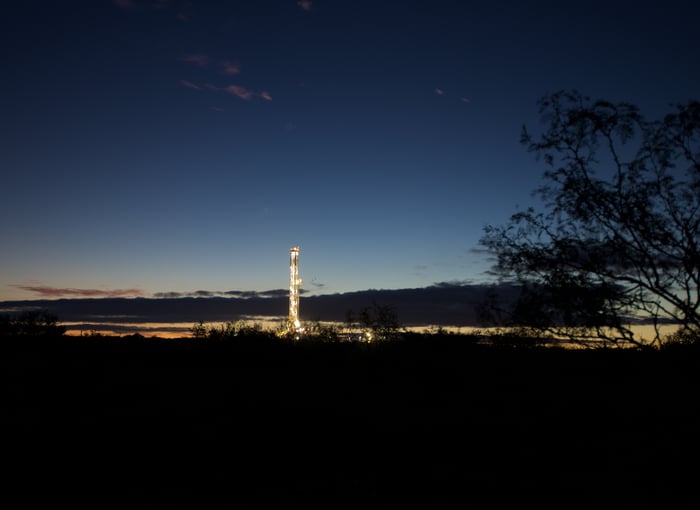 Those international assets seem to be what investors see in Apache, which causes them to overlook the fact that, like Devon and Pioneer, it also controls a compelling position in the Permian Basin. In fact, at around 1.6 million net acres, it's one of the largest acreage holders in the basin. For perspective, Pioneer only controls about 800,000 gross acres in the basin while Devon holds 670,000 net acres. That said, not all of Apache's acreage is in the core of the play as more than half its position is in low-growth areas on the periphery. Furthermore, one of the company's largest focus areas is in the Alpine High field it discovered last year, which is an unproven area. That said, with each new well, Apache grows more confident in Alpine High's resource potential, which it estimates at more than 3 billion barrels of oil and another 75 trillion cubic feet of natural gas.

The reason investors love companies with exposure to the Permian Basin is that it can fuel robust production growth at current oil prices because of its low drilling costs and hydrocarbon-saturated rocks. That combination has Pioneer Natural Resources forecasting over 15% compound annual production growth through 2026 from its resources in the region. It can also achieve that growth while living within cash flow starting next year as long as oil averages above $55 per barrel. Meanwhile, Devon Energy expects to deliver 13% to 17% oil production growth by the fourth quarter this year and more than 20% oil growth next year. Though companywide output will only be up by a mid-single-digit rate this year, Devon needs oil at $55 this year and $60 next year to fuel its plan.

While those are compelling growth rates, what investors seem to overlook is how well they compare with Apache's projection of 7% to 13% compound annual production growth through 2018. That's because Apache expects to achieve that growth while living within cash flow at $50 oil this year, suggesting that it could grow even faster if it used a higher oil price for its forecast.

Apache, however, plans to stick with its conservative financial plan, abstaining from potentially overreaching on growth until market conditions improve. In fact, Apache has been in a class of its own over the past year as it was the only large U.S. producer that didn't outspend cash flow, generating $102 million in excess while its peers outspent by an average of $1 billion. Because of that fiscal conservatism, Apache didn't need to issue any equity or cut its dividend last year. Contrast this with Devon, which did both while Pioneer has a long history of issuing equity to finance capex and acquisitions. Apache, on the other hand, believes that its conservative plan will yield superior production growth on a per-share basis over the long term because it avoided diluting investors to drive unnecessary growth during the downturn.

Investors have been bidding up most oil stocks with positions in the Permian Basin. However, one stock they've passed over is Apache. It appears investors are more focused on the company's international assets and the risks associated with its emerging Alpine High play than with its upside in the Permian. That's a mistake, in my opinion, because Apache has clearly visible production growth up ahead that it can completely finance with internally generated cash flow at less than the current oil price, enabling it to maintain a strong financial position. Instead of brushing it off, investors might want to take a closer look at Apache.