Stocks in the biotech and pharmaceuticals industries can give investors a ride more intense than the wildest roller coasters. A quick analysis of the stock history of Sarepta Therapeutics (NASDAQ:SRPT) provides a great example of this.

For two decades, Sarepta stock has soared, sank, zigged, and zagged. In the process, fortunes have been built -- and lost. Here's a quick look at the highlights from Sarepta Therapeutics' stock history. 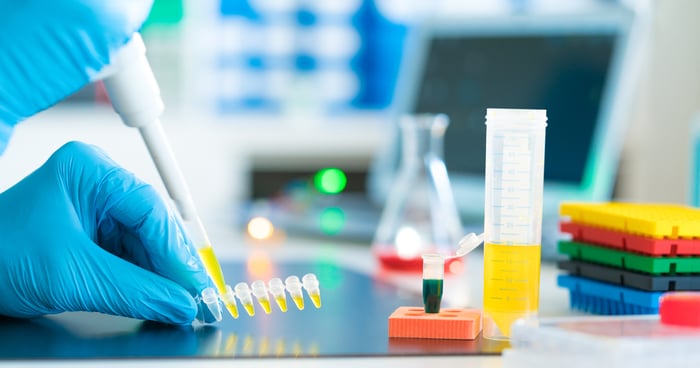 Sarepta was first incorporated way back in 1980. The company was initially named AntiVirals, Inc. It remained privately held until it went public in 1997. Shortly afterward, AntiVirals changed its name to AVI BioPharma.

In its first decade, the stock's performance was all over the map. That's not unusual for clinical-stage biopharmaceutical companies, though. 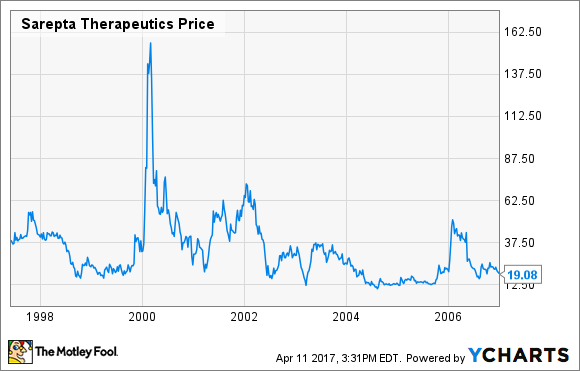 During the earlier part of this period, Sarepta's lead candidate was experimental cancer vaccine Avicine. The company completed phase 1 and phase 2 clinical studies for Avicine. With a seemingly promising potential, Sarepta licensed the product to SuperGen in 2000. SuperGen was later acquired by Japanese drugmaker Otsuka Pharmaceuticals.

Although Sarepta expected Avicine to advance to a late-stage clinical study in 2000, the wheels turned more slowly than the company thought they would. By 2007, SuperGen still had not initiated the phase 3 study. Sarepta had moved to another lead candidate long before then.

That next candidate was Resten-NG, an antisense drug targeting treatment of restenosis, a condition that occurs when a section of a blocked artery that was opened by angioplasty or a stent narrows again. However, despite encouraging results from a phase 2 study, by 2006 Sarepta had licensed the drug to Cook Group and changed its focus to yet another area.

Sarepta began talking about a proof-of-concept study for an experimental RNA drug in treating Duchenne muscular dystrophy (DMD) in 2006. DMD is a rare disease that at the time had no approved treatment.

By 2008, RNA therapeutics targeting DMD had become Sarepta's primary focus. Over the next several years, the company's stock surged and tanked on every news story that provided any hints of how things were going in treating the rare disease. 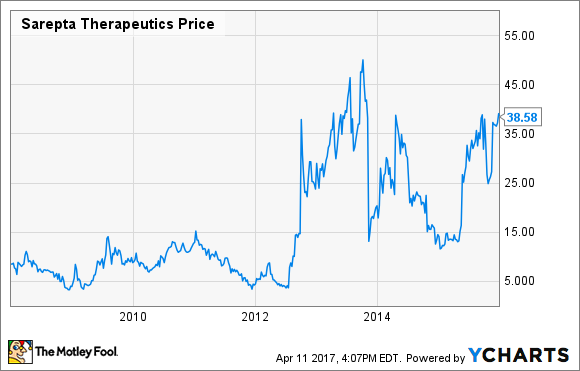 In 2012, the company changed its name to Sarepta Therapeutics. A few weeks later, its stock skyrocketed on positive results from a phase 2b study of experimental DMD drug eteplirsen.

More good news followed in 2013 with additional results. Sarepta began talking about plans to submit eteplirsen for regulatory approval in 2014. The stock kept on rising.

However, in November 2013, Sarepta announced that the U.S. Food and Drug Administration (FDA) stated that a filing for approval of eteplirsen would be "premature." This decision came in light of the failure of another experimental DMD drug, Prosensa's drisapersen, in a late-stage study.

Prosensa was acquired by BioMarin (NASDAQ:BMRN) in 2014 after additional data showed that drisapersen had a chance at approval. As it turned out, those hopes were dashed. BioMarin threw in the towel on drisapersen in 2016 after the FDA rejected approval of the drug.

The saga experienced by Prosensa and BioMarin with drisapersen took its toll on Sarepta stock. By late 2015, though, Sarepta's share price had rebounded as the date drew near for an FDA advisory committee to review eteplirsen.

Sarepta soon encountered its first difficulty in January 2016 with a delay of the FDA advisory committee's review of eteplirsen due to bad weather. A few weeks later, the FDA announced that it would need an additional three months to review the experimental DMD drug. The uncertainty caused Sarepta stock to crash.

The share price slowly made a comeback in subsequent months. However, Sarepta stock again tanked in April 2016 when the FDA advisory committee voted against recommending eteplirsen. The prospects for the drug appeared to be doomed.

That began one of the most intriguing -- and controversial -- developments in the regulatory process in years. The DMD patient community lobbied hard for approval of eteplirsen. In the end, the FDA overrode the recommendation of its advisory committee. Eteplirsen won FDA accelerated approval in September 2016. The stock soared -- initially.

Sarepta also scored a victory in a patent dispute with BioMarin. In September, the United States Patent and Trademark Office (USPTO) issued two rulings in favor of Sarepta. BioMarin is appealing the decisions.

However, Anthem decided against paying for eteplirsen (which by then had been branded Exondys 51). The big health insurer's opinion was that the clinical data supporting the FDA approval for the drug simply wasn't convincing. Anthem wasn't alone in that view. One of the FDA's scientists even called eteplirsen "a scientifically elegant placebo."

Sarepta stock is now essentially back where it was prior to the FDA approval. The company must conduct additional clinical studies to keep the approval in place for eteplirsen. What happens for the future of Sarepta and its stock hinges on how those studies go.