Please ensure Javascript is enabled for purposes of website accessibility
Log In Help Join The Motley Fool
Free Article Join Over 1 Million Premium Members And Get More In-Depth Stock Guidance and Research
By Daniel B. Kline - Updated Apr 12, 2017 at 1:39PM

The chain wants to increase traffic to its stores outside of morning hours.

For cafe chains including Starbucks (SBUX 2.03%) and Dunkin' Donuts (NASDAQ: DNKN), growing business outside of the traditional morning rush has always been a sort of holy grail. If either company can find all-day or lunch items that connect with customers, they will drive traffic to stores at times that are less crowded. That would be a huge win because operating overhead does not change all that much between a busy store and an open, but more empty one.

Unfortunately for both of these chains, wanting to attract customers to less busy dayparts and actually being able to do it are two very different things. The idea that the right item or menu will make this happen has led to Dunkin' Donuts trying everything from pizza to soup, sandwiches, and even apple pie. For its part, Starbucks has failed with alcohol, a dedicated dinner menu, a late-afternoon offering, and even handcrafted sodas aimed at people who did not want caffeinated beverages later in the day.

Now, Starbucks is at it again, testing a dedicated lunch menu in around 100 stores in downtown Chicago. It's hard to see why this attempt will be much different than its previous ones (or Dunkin's decades of trying), but the lure of becoming a lunch destination will likely keep both chains trying. 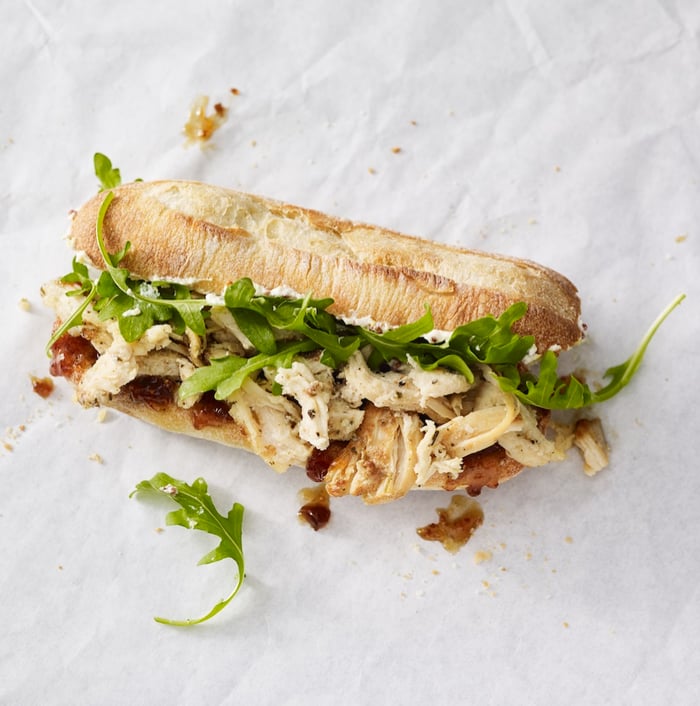 It's important to note that while Starbucks has not become a lunch or dinner destination, the chain has "grown its food business by 1.5 times since 2013 and plans to double it by the year 2021," according to a company press release. That growth has come from the company improving its baked goods, offering higher-end packaged snacks, and bringing in fun novelty treats like mini-stuffed bagels as well as Megpies, an adult take on a Pop-Tart.

Its new lunch menu, called Mercato, includes ready-to-eat salads, sandwiches, and various side items designed to serve customers looking for everything from high-protein meals to vegetarian and vegan choices. The new choices deliver on a promise to innovate its lunch offerings that the chain made at its December investor conference.

The new menu includes a chicken and lemon tahini salad; a cauliflower tabbouleh salad; a steak and mango salad; a chicken and fig spread sandwich; a smoked pork sandwich; and an almond butter, strawberries, and jam sandwich. Starbucks plans to donate any unsold ready-to-eat food to various community groups through its partnership with Feeding America.

Will this work for Starbucks?

It's hard to see Starbucks becoming a lunch destination with premade food when customers looking for lunch could go to a rival like Panera Bread, where meals are made-to-order, and the menu is deeper. What Starbucks should be able to do is raise the average check from people already stopping in during lunch hours. In addition, the chain should be able capture a small number of customers looking to quickly pick up a lunch that is better than fast-food or convenience-store fare.

The Mercato menu won't change how people see Starbucks, but it should help it eke out an increase in same-store sales. The chain, like Dunkin' Donuts, simply lacks the facilities to compete with actual restaurants, but this effort should slightly expand its audience.