Fresh on the heels of its surprising decision to unload the bulk of its Canadian assets, ConocoPhillips (COP 1.28%) is back with another deal. This time the U.S. oil and gas giant is sticking with its declared strategy after announcing a deal to jettison its San Juan Basin gas assets for up to $3 billion. In doing so, it's taking another step toward its goal of accelerating value creation for shareholders.

In its latest deal, ConocoPhillips agreed to sell its entire position in the San Juan Basin to Hilcorp Energy for up to $3 billion. The company will receive $2.7 billion at closing and a contingent payment of up to $300 million. Under the terms of the agreement, starting next year, ConocoPhillips can receive an annual payment over the next six years of $7 million per month for every month the price of natural gas is above $3.20 per MMBtu, with those payments capped at $300 million. 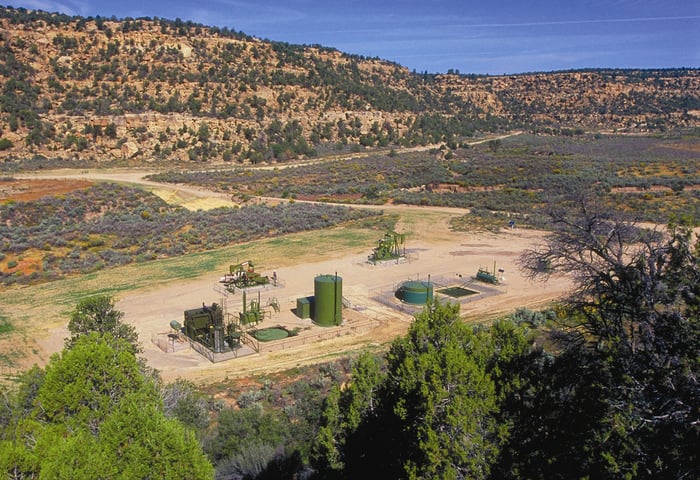 This deal does four things for ConocoPhillips. First, it accelerates the value of its San Juan Basin assets since the company will receive $2.7 billion up front for assets that were only generating about $200 million in annual cash flow. Though that price is well below the company's $5.9 billion net book value of the assets, due in large part to the premium the company paid when it acquired Burlington Resources in 2006. For comparison sake, ConocoPhillips' $13.3 billion Canadian asset sale to Cenovus Energy (CVE 2.81%) represented a premium to the $10.9 billion net book value of those properties, which enabled ConocoPhillips to unlock value.

The other three things this deal does is reduces the company's exposure to North American dry gas, it further focuses the portfolio toward higher margin oil and liquids, and it preserves some upside via the contingent payment. The ability to hold on to some of the upside has been a hallmark of the company's transactions this year. It was an essential component of the Cenovus Energy transaction, which included both an uncapped contingent payment over the next five years and the ability to participate in the equity upside of the $2.7 billion in Cenovus' stock that it acquired as part of the deal. By including these provisions in the agreements, ConocoPhillips stands to benefit from rebounding oil and gas prices in the future.

Where does it go from here?

The San Juan Basin transaction follows the strategy the company outlined last November when it said it would sell $5 billion to $8 billion of primarily North American gas assets. The company planned to use those proceeds to buy back up to $3 billion of stock over the next three years and reduce debt to around $20 billion. However, the Cenovus Energy deal accomplished the company's three-year goal in less than a year, which put the company in the position to accelerate its strategy and set new targets, including repurchasing up to $6 billion in stock and reducing total debt to $15 billion by 2019.

With $13.3 billion of cash coming into its coffers by the end of this year, ConocoPhillips expects to buy back $3 billion in stock this year and reduce gross debt from $27 billion to $20 billion by retiring the bulk of its upcoming debt maturities through 2019. Meanwhile, the company will use the rest of the cash proceeds along with internally generated excess cash flow to opportunistically repurchase another $3 billion in stock and retire $5 billion in additional debt over the next three years. Meanwhile, the company could target additional asset sales over the next few years to further enhance its financial flexibility. For example, it reportedly put its underutilized Kenai LNG export terminal in Alaska on the market and could eventually offload that asset. Meanwhile, the company is in the process of a phased exit of deepwater exploration and has a vast acreage portfolio in the Gulf of Mexico, as well as some notable discoveries, that it could sell. Further, the company does have additional North American dry gas assets that it could sell, including its positions in the Barnett and Uinta. While many of these are smaller assets and therefore wouldn't be needle-moving deals, they'd still enable the company to pull value forward and sharpen its focus on core assets.

ConocoPhillips has a plan to reshape the company so that it can deliver returns-driven growth to investors. With its latest asset sale, the company has finished the bulk of its heavy lifting and now has a boatload of cash coming its way. That capital gives the company the fuel to accelerate its value creation efforts, putting it on the path to deliver double-digit annual returns for investors in the years ahead.