An e-sports arena is being built at Luxor, validating the e-sports industry in a big way.

Las Vegas is a world class destination for boxing, concerts, restaurants, hotels, and gambling. But it's now trying to become the leading venue for the emerging e-sports industry.

MGM Resorts (MGM 1.65%) has announced a partnership with Allied Esports to build a dedicated e-sports venue in the Luxor Hotel and Casino, which will bring dozens of events each year from the growing industry. And this could help boost the fortunes of game companies like Activision Blizzard (ATVI 0.40%) and EA Sports (EA 1.45%) as well. 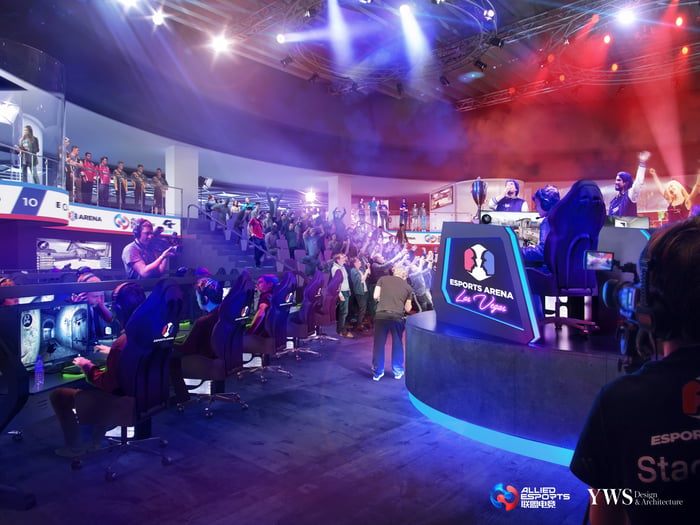 What the heck are e-sports?

Over the last few years, electronic game competitions have become a huge business. Gamers battle each other in large tournaments and there can be millions of dollars on the line. These tournaments are also huge attractions for fans, who watch by the millions. Collectively, the segment of the gaming industry is called e-sports.

Activision Blizzard bought Major League Gaming to expand into e-sports with Call of Duty World League and the Overwatch League. Electronic Arts is moving into the field with plans to expand tournaments in Madden and Battlefield 1.

The e-sports business may be a small moneymaker for the game companies, but it's really about engaging players around the world in the game. If people are watching e-sports they're more likely to play and pay for engaging material.

Bringing e-sports to The Strip

MGM's agreement to build a dedicated e-sports arena at Luxor is an acknowledgement of the opportunity for Las Vegas. The city could hold dozens of small events each year and a few major events as well. There could even be daily tournaments, much like poker tournaments across the city.

This could also rejuvenate the Luxor, making it an attractive location for the gamer community. Luxor could use a boost in results after posting $391.6 million in revenue and $108.2 million in EBITDA during 2016. That's the sixth highest EBITDA level for MGM on the Las Vegas Strip, followed by neighboring Excalibur. A new venue could help both properties.

MGM is also expanding non-gaming entertainment options up and down the Las Vegas Strip. The T-Mobile Arena is just north of Luxor and will bring people in for over 100 events each year. The flow of customers through the area should be a big help to finances.