Switching and routing hardware is the most important part of Cisco, but that may not remain true forever.

Networking giant Cisco Systems (CSCO -0.01%) is a survivor of the dot-com bubble. Its market capitalization peaked at around $550 billion in 2000, only to tumble and never again come close to approaching that level. Cisco is worth just $165 billion today, a steep decline that decimated investors who bought at the top. But the company itself has performed far better than the stock over the past 17 years.

Cisco has ridden the wave of internet adoption to become the overwhelming leader in switches, which connect computers together into networks, and routers, which connect those networks to the internet. During the fourth quarter of 2016, Cisco enjoyed a 55.6% share of the ethernet switching market and a 42.2% share of the service provider and enterprise router market. Cisco has been losing some share to its rivals as of late, but the gap between Cisco and the second-place vendor remains vast. Switching and routing are Cisco's biggest cash cows, producing an outsize portion of its revenue and profit.

Switching and routing constitute Cisco's core business. These categories were responsible for 59.5% of Cisco's product revenue in fiscal 2016 and 45% of its total revenue. Here's a breakdown of how Cisco generates its nearly $50 billion of annual revenue. 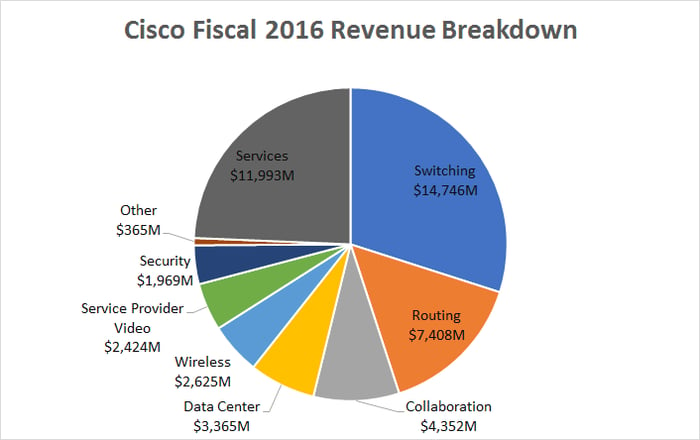 Cisco's business model involves selling proprietary hardware, creating significant switching costs for its customers. Cisco doesn't break out its profit on a per-category basis, but with a product gross margin of 62% in fiscal 2016, up from 56.8% in fiscal 2014, it's clear that the core business is wildly profitable. Total net income was $10.7 billion in fiscal 2016, about 21.8% of revenue.

Cisco's switching and routing businesses have been under threat for years from the emergence of software-defined networking, where commodity hardware is paired with software. SDN so far hasn't had too much of a negative effect on Cisco, with its market share in switching and routing remaining dominant, aided by Cisco's own take on SDN, Application Centric Infrastructure. But it remains a long-term threat that could eventually upend Cisco's biggest cash cows.

Rumors emerged last month that Cisco was planning to sell some of its software separate from its high-end hardware in an effort to prevent its customers from moving to competitors that offer cheaper hardware. Cisco shot down the rumors, but the company could certainly be forced to go in that direction if its customers demand it. One advantage Cisco has is that it sells integrated solutions, involving hardware and software, so a shift toward separating those components would be a risky one. It may, however, eventually become necessary.

Cisco has been diversifying away from switching and routing, with acquisitions driving growth in smaller businesses like security and collaboration. Cisco is making a big software and subscription push, aiming to grow its recurring revenue and offset inconsistent revenue in its core businesses. Total deferred revenue reached $17.1 billion at the end of the most recent quarter, up 13% year over year, while deferred revenue related to recurring software and subscriptions soared 51% to about $4 billion.

For now, switching and routing hardware remains the largest contributor to Cisco's revenue and profit. Acquisitions, like the recent $3.7 billion purchase of AppDynamics, will continue to push the company deeper into the software business. This spending was on top of the $3.34 billion Cisco spent on acquisitions in fiscal 2016. If one thing is clear, it's that Cisco is not shy about opening up its wallet in order to grow the software business.

The makeup of Cisco's revenue will likely change dramatically in the coming years, with growth businesses like security becoming more important. Software and services should also grow as a percentage of revenue, especially if Cisco moves to decouple its high-end hardware from the software that runs on it. Switching and routing hardware will remain a critical part of Cisco's business, but it may no longer be the star of the show.