Wall Street warms to the idea of a stronger PC market.

It's been a good couple of months for investors in personal computer parts suppliers. So far, we've seen shares of Micron, Seagate, and Western Digital -- all makers of computer solid state and hard disk drives -- upgraded with buy ratings. And the reasons Wall Street gives are encouraging: Demand is high and supplies are tightening for solid state memory. And that implies (and other data support the thesis) that demand for personal computers is finally stabilizing.

Conclusion: The PC industry is coming back to life -- and according to Citigroup, that's good news for HP Inc (HPQ -1.30%). 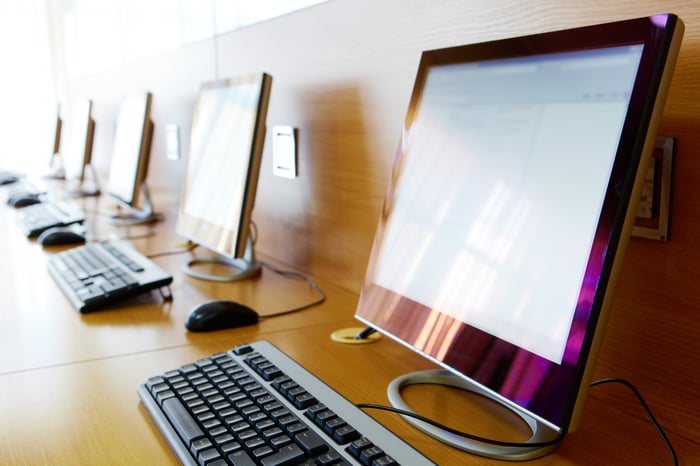 Yesterday, in an upgrade heard round the world, Citigroup announced it is raising its recommendation on HP stock from neutral to buy. As reported on TheFly.com yesterday, Citi sees "better than expected PC data points" and believes that HP's printer ink business is also beginning to stabilize.

This could lead analysts to revise their earnings targets for HP stock higher, which would naturally result in a higher stock price as well. Citi estimates HP could hit $20 within a year -- about an 11% improvement from the current stock price. Tack on a respectable 3.1% dividend yield, and that makes for a potential 14% profit for new buyers of HP stock.

And that's not all. Digging deeper into Citi's analysis of HP stock, StreetInsider.com says that not only is the PC market improving, but HP is capturing a bigger share of that market. Combining improved profit margins with more sales, Citi argues that HP could earn as much as $1.64 per share this year ($0.05 more than previously postulated). This could be followed by earnings of $1.75 in 2018, and perhaps $1.79 in 2019, if all goes well.

Thus, HP's current stock price of $18 and change values the company at roughly 10 times 2019 earnings -- and to Citigroup, that's good enough to merit a buy rating. On the other hand, given that even Citi is only predicting about 4% to 5% annualized sales growth for HP, investors may wonder if HP stock is really worth paying 10 times earnings two years out -- earnings that may or may not happen. (For the record, according to S&P Global Market Intelligence, most analysts think HP will only be earning $1.60 in 2019.)

And for that matter, is business really as good as Citigroup says? Not all experts think so. For example, earlier this week, tech-watcher Gartner published a report that shows worldwide PC shipments declining 2.4% year over year in Q1. Gartner noted, furthermore, that this was the first time PC makers shipped fewer than 63 million units in a full quarter -- since 2007!

Fact is, Gartner reports that the only segment of the PC market that is growing today is purchases of PCs by businesses -- and even this growth is only "modest." Consumer purchases of personal computers continue to decline, as individuals make do with older PCs rather than upgrading to fancier versions. At the same time, some consumers, says Gartner, have abandoned PCs altogether, and do their computing today on tablets and smartphones instead.

Gartner's conclusion doesn't necessarily contradict Citigroup's upgrade of HP stock, but it does refine it a bit -- and this could be important for investors to bear in mind. Says Gartner, with consumer sales growth nonexistent, "maintaining a strong position in the business market" is what will be "critical" for PC makers. Emphasizing the point, Gartner believes PC industry investing may become less a matter of finding "winners," and more one of just finding "survivors."

Who will those survivors be? Gartner argues that only the top three vendors of PCs have much of a chance of coming out of this downturn alive. That means Lenovo in China, privately held Dell, and -- the only one of the three that's actually easy to invest in -- HP. Unless PC sales suddenly and magically improve, everyone else, warns Gartner, could be forced out of the PC market "in the next five years."

So what's the upshot for investors? Gartner believes HP will be one of only a small handful of survivors remaining in the PC market five years from now. That may be enough to merit a buy rating, if you believe Citi's prediction of 4% to 5% growth -- and if that's fast enough growth for you.

For me, it's not, and that's why I'll be passing on this particular buy recommendation.