Please ensure Javascript is enabled for purposes of website accessibility
Log In Help Join The Motley Fool
Free Article Join Over 1 Million Premium Members And Get More In-Depth Stock Guidance and Research
By Reuben Gregg Brewer - Apr 13, 2017 at 11:08AM

Big dividend yields can indicate extra risk, but here are four oil-and-gas companies to consider now where the yields afford ample compensation for that risk.

Dividend investors sometimes have to look at out-of-favor industries to find solid yield opportunities. And while you might be watching the price of oil and thinking the energy sector would be a good area to avoid now, that isn't true for oil-and-gas stocks across the board. For those seeking fat dividend yields, Royal Dutch Shell (RDS.B), Helmerich & Payne Inc. (HP 14.64%), Enterprise Products Partners L.P. (EPD 1.65%), and Buckeye Partners L.P. (BPL) are four worth a deep dive today.

Royal Dutch Shell is aggressively selling assets to pay down its debt. The plan is to jettison some $30 billion worth of non-core assets. Why? Because while other energy names were pulling in their horns after oil started to plunge in mid-2014, Shell spent around $50 billion to buy BG Group. That pushed its debt up by 50% in a single year. 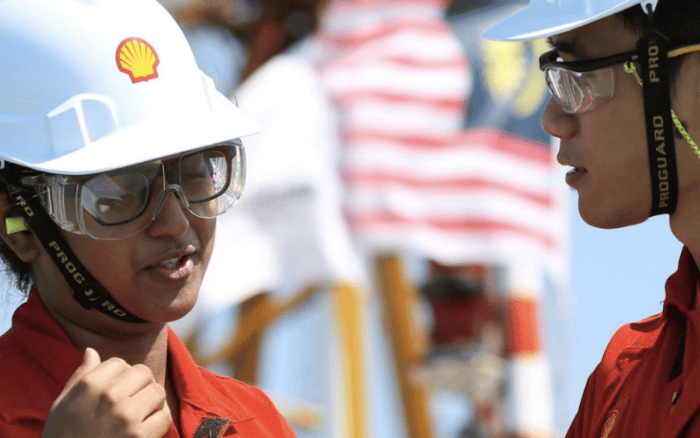 But Shell clearly knows what it needs to do (reduce debt), it is working hard to achieve its goal (it has already sold or agreed to sell almost $20 billion in assets), and it is clearly articulating its growth plans to the market. While debt is still an overhang, investors should strongly consider grabbing the 6.7% yield from one of the world's largest integrated oil companies.

Is that a silver lining?

Helmerich & Payne's focus in the energy space is drilling. It isn't an oil company, although it builds, leases out, and operates drilling rigs around the world. Its largest business is in the onshore U.S. market, where about 90% of its drills are located. That said, most of its rigs aren't being used right now.

When oil was trading hands at over $100 a barrel, the company had around 90% of its U.S. rigs under contract. Today, that number is around 31%. A big difference ... but still an improvement from the 25% in late 2016. In other words, it looks like Helmerich & Payne's business is starting to pick up again now that oil is trading around the $50 range. The company offers a pleasing 4.1% yield, and has increased its dividend every year for more than four decades -- including through the recent oil downturn. Things are tough right now, for sure, but this could be a good time to do a deep dive here before drilling demand really starts to heat up. 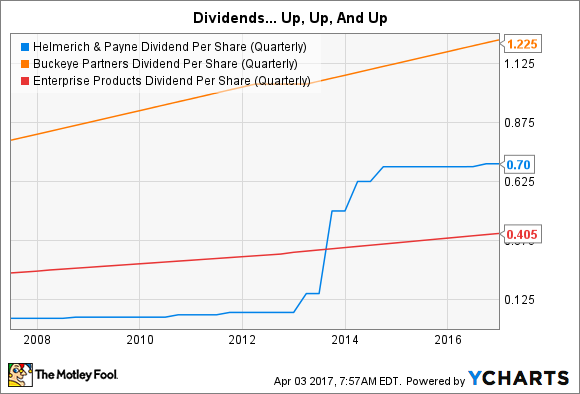 Enterprise Products Partners is a toll-taker in the energy space. It owns a vast collection of pipelines, ships, and storage and processing facilities. The price of oil and gas is, for the most part, not all that important for those businesses; demand is the main driver of throughput, and thus of Enterprise's results. And while the price drop in oil was dramatic, demand didn't skip a beat. Neither did Enterprise Product Partners' distributable cash flow, which was roughly the same in 2016 as it was in 2014, despite lower energy prices.

That solid foundation is why Enterprise has been able to increase its distribution for 20 consecutive years, including each of the last 50 quarters. Note, too, that it covered its distribution by 1.2 times last year, giving it a lot of breathing room for further hikes. On the growth front, Enterprise has some $7 billion worth of projects set to come online through 2019. With a nearly 6% distribution yield, income investors would do well to take a look at this rock-solid energy name.

Another midstream player that income investors should be taking a seriously look at is Buckeye Partners. The company's main focus is storage, and it's a lot smaller than industry giant Enterprise, but don't let that fool you. Buckeye's annual dividend streak is up to 22 years, and it has a 7.1% distribution yield. So, for more aggressive types, it might be a better option than Enterprise. 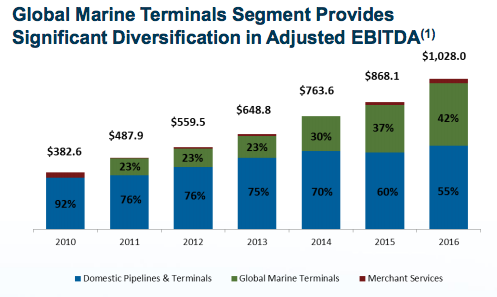 Buckeye has been diversifying and growing at the same time. Image source: Buckeye Partners, L.P.

The big story at Buckeye has involved its efforts to diversify. In 2010, roughly 90% of adjusted EBITDA came from its domestic business. Since that point, it's spent $8 billion on acquisitions and expansions that have lowered that to 55% and increased its foreign business from nothing to 40% of adjusted EBITDA. Distributable cash flow, meanwhile, has grown each year through the oil downturn. Not bad for a business trying to change its stripes -- and a really good reason to put this partnership on your watch list.

High yields in the energy arena

If you're worried that volatile oil prices are a big risk in the energy industry, you are not alone. But that doesn't mean you shouldn't be looking at it for solid dividend names. Royal Dutch Shell, Helmerich & Payne, Enterprise Products Partners, and Buckeye Partners are four that offer pleasing yields and backstories that suggest their large disbursements make them worth the risk of stepping into the oil patch.