Shares of Pier 1 Imports (OTC:PIRRQ) were down 10% as of 3 p.m. EDT Thursday, after the home-furnishings and decor retailer announced mixed fiscal fourth-quarter 2017 results, plans for more store closures, and underwhelming guidance.

Quarterly revenue declined 2.6% year over year, to $528.4 million, as comparable-store sales growth of 0.2%, and 28% growth in e-commerce sales (to $103.1 million) were more than offset by a 3% decline in the average number of stores due to store closures. On the bottom line, that translated to adjusted earnings per share of $0.34. Analysts, on average, were expecting lower adjusted earnings of $0.33 per share, and slightly higher revenue of $529.8 million. 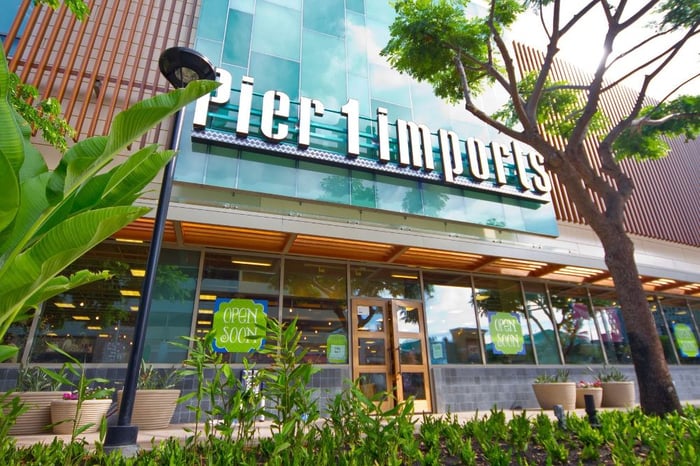 "With our omni-channel capabilities firmly in place, we are focused on optimizing our new business model to maximize efficiency while reinvesting in customer-facing activities to drive sales," added Pier 1 CFO Jeffrey Boyer. "We entered the new fiscal year with a strong balance sheet and the financial flexibility to pursue our operating and growth plans, which include initiatives around merchandising, marketing, supply chain and real estate."

Nonetheless, after ending the year with 1,018 locations, Pier 1 also plans to close another 20 to 25 net stores in the coming fiscal year. In the meantime, Pier 1 anticipates revenue in the current quarter to be flat to up 1% year over year, including 1% to 2% growth in comparable sales. That should translate to a quarterly net loss of $0.07 per share to $0.03 per share. By contrast, Wall Street was modeling a narrower quarterly loss of $0.02 per share on slightly lower 0.7% growth in revenue, to $421.3 million.

Finally, for the full year, Pier 1 anticipates revenue will increase 2% to 3%, to a range of roughly $1.865 billion to $1.883 billion; this includes 1% to 2% comparable-sales growth, which should result in earnings per share of $0.46 to $0.52. Analysts were expecting roughly the same earnings on lower revenue this fiscal year of $1.84 billion.

In the end, this is not to say Pier 1's results were terrible. But it's hard to blame investors for bidding shares down, given the combination of Pier 1's modest growth, wider-than-expected loss in the near term, and shrinking store base.