Over the past five years, numerous traditional retailers have experienced weak sales and plunging profits, because of the growth of e-commerce, as well as rising brick-and-mortar competition from off-price retailers such as TJX Companies (NYSE:TJX).

Pier 1 Imports (OTC:PIRRQ) has been no exception. Pressure began mounting around 2014, and the downward spiral in sales and profitability has accelerated dramatically over the past year and a half. This is threatening the home furnishings chain's very survival -- and creating another superb growth opportunity for TJX.

Sales and profit woes spin out of control

A little over a year ago, Pier 1 Imports' management team held an investor day to lay out a new strategy for turning around the struggling company. Management noted that comparable-store sales growth had begun to slow in fiscal 2016, roughly corresponding to the 2015 calendar year, before turning negative in fiscal 2017. Meanwhile, adjusted earnings per share plunged by nearly 80% between fiscal 2014 and fiscal 2018. 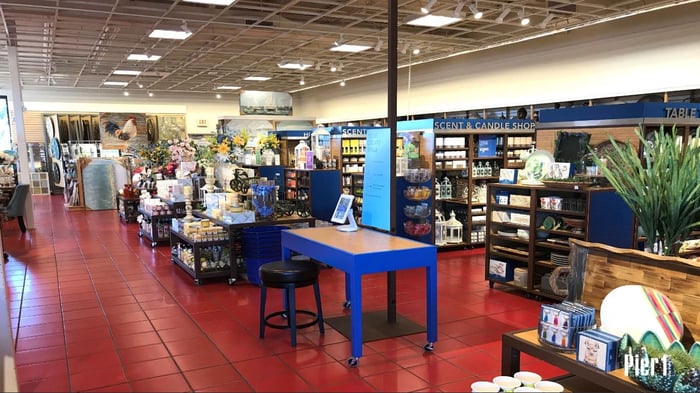 Management's goal was to grow sales 4% to 6% over a three-year period and roughly triple EPS through margin expansion. The company expected adjusted earnings before interest, taxes, depreciation, and amortization (EBITDA) to fall to a range of $30 million to $50 million in fiscal 2019 from $89 million a year earlier, before rebounding to between $120 million and $150 million by fiscal 2021.

That plan is now in tatters. Comparable sales plunged 11% and total sales decreased 13.7% to $1.55 billion last year. Adjusted EBITDA fell deep into negative territory at negative-$136.7 million. The company also burned $135 million of cash. Pier 1's CEO resigned in late 2018, and several other top executives have been replaced over the past year.

Pier 1 Imports is off to a terrible start in fiscal 2020, too. Last week, the company reported that total sales plummeted 15.5% to $314 million in the first quarter on a 13.5% comp sales decline. As a result, Pier 1 has already abandoned its earlier forecast that EBITDA would improve by $45 million to $55 million this year.

Much of Pier 1 Imports' struggles can be traced to strategic missteps. But rising competition has also been a huge headwind, contributing to Pier 1 stock's nearly 98% plunge over the past five years. 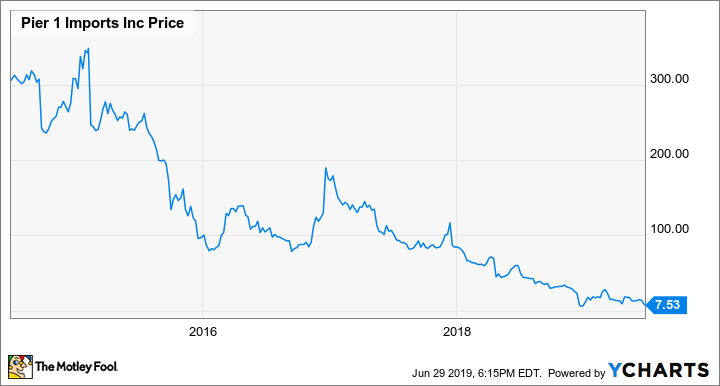 No competitor has been more of a headache for Pier 1 Imports than TJX. Last year, the off-price giant's HomeGoods unit posted sales of $5.79 billion, up from just $1.58 billion 10 years earlier. HomeGoods continued its strong growth last quarter, with sales up 10% year over year.

HomeGoods has gained market share rapidly over the past decade because of its low prices and its constantly changing merchandise assortment, which creates a "treasure hunt" atmosphere and drives customers to return frequently.

The threat from TJX is only growing. Two years ago, TJX launched a new home store concept in the U.S., called HomeSense, to complement HomeGoods. Whereas HomeGoods sells lots of home decor in competition with Pier 1, HomeSense features an expanded furniture section. Thus, Pier 1 Imports now faces competition from TJX across an even broader portion of its merchandise assortment.

TJX ended last quarter with 792 HomeGoods and HomeSense stores in the United States. It also has 132 HomeSense stores in Canada, another market where it competes with Pier 1. TJX sees room to expand to at least 1,400 domestic stores across the two home concepts over time.

Over the past five years, TJX has added $9 billion to its top line in the U.S., even as many other brick-and-mortar retailers have struggled. TJX is clearly gaining market share at the expense of competitors that have been closing stores -- and, in some cases, going out of business entirely.

Pier 1 Imports currently expects to close at least 57 stores this year, and that figure could go even higher if the retailer continues to miss its targets. Moreover, with cash flow steadily falling deeper into negative territory, Pier 1's chances of long-term survival are dimming.

Despite its terrible sales results since the beginning of last year, Pier 1 still generates well over $1 billion in annual revenue. As the company retrenches -- and particularly if it eventually goes out of business -- it will add to the massive growth momentum of TJX's HomeGoods and HomeSense chains.