These three tech giants are solid alternatives to the graphics chip king.

Shares of graphics chip company NVIDIA (NVDA 2.39%) soared 220% last year, driven by explosive growth in its core gaming business coupled with even more impressive growth in its enterprise and automotive segments. NVIDIA is at the center of multiple trends, including virtual reality, machine learning, and self-driving cars, and investors have not been shy about awarding the stock a nosebleed valuation.

A newcomer to driverless car technology

Daniel Miller (Intel Corporation): To be fair, it's pretty difficult to find many stocks better than NVIDIA. However, Intel Corporation is cheaper and less volatile than NVIDIA, and offers investors a strong angle in the future of driverless cars, with a dividend yield of 3%.

Again, to be fair, Intel might not have made this list if it wasn't for the recent acquisition of my favorite driverless car stock, Mobileye, the global leader in computer vision for Advanced Driver Assistance Systems (ADAS). Intel estimates automated driving systems, data, and services could be a $70 billion addressable market as soon as 2030, and the acquisition will be immediately accretive to adjusted earnings and free cash flow. 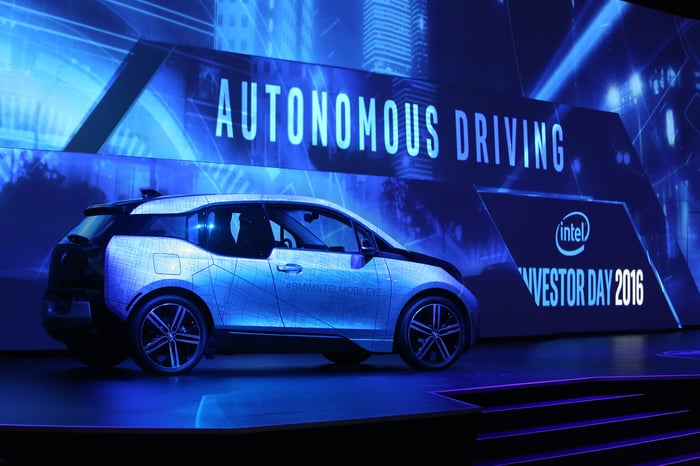 Mobileye already boasts major partnerships with 25 automakers, including some of the world's largest such as General Motors, Honda, Ford, Nissan, and many high-end luxury brands. Mobileye's EyeQ chips were installed in roughly 16 million vehicles at the end of 2016, and its EyeQ4 and EyeQ5 chips for level 3 and 4 autonomous driving vehicles will go into production in 2018 and 2020.

With Intel's acquisition of Mobileye, the combined company will be a leading end-to-end autonomous driving technology provider with a world-class supply chain. Intel still faces headwinds with the PC industry in decline, but its move to acquire Mobileye and jump into the future of driverless vehicles is promising. It's also trading at a cheap valuation of roughly 17 times earnings, and it will pay you a 3% dividend yield while management tries to revive its growth story.

Tim Green (Qualcomm): With NVIDIA trading at an optimistic valuation, a better bet could be Qualcomm. Qualcomm makes most of its profit from licensing key technology and intellectual property, but its $47 billion acquisition of NXP Semiconductors, expected to close before the end of the year, will make it the leading supplier of semiconductor products to the automotive industry. This will put Qualcomm in direct competition with NVIDIA in the driver assistance and autonomous vehicle markets.

The deal closing is not a sure thing, and Qualcomm is also facing some serious headwinds that could derail the stock. The company was sued by Apple earlier this year, with the iPhone maker accusing it of charging unfair royalties and withholding payments. That news came just days after the Federal Trade Commission charged Qualcomm with anti-competitive sales and licensing tactics. With the majority of Qualcomm's pre-tax profit derived from licensing, any threat to the licensing business could be big trouble for the company.

It's impossible to tell how these lawsuits will play out, but investors have pushed down the stock in reaction. Shares of Qualcomm are down 13% so far this year, creating an opportunity for those who believe the company will emerge from these challenges unscathed. With the stock trading for just 12 times the average analyst estimate for fiscal 2017 adjusted earnings, a favorable outcome for Qualcomm, or the successful closing of the NXP deal, could send the stock soaring.

Dan Caplinger (Alphabet): Technology stocks come in and out of vogue, and NVIDIA has been one of the darlings of the tech world for more than a year now. By contrast, Alphabet has languished, posting only minimal gains in 2016 and underperforming the Nasdaq Composite so far this year as well.

Yet over the long run, Alphabet has a number of growth drivers that should help push the stock higher. The key search engine market continues to be a cash cow for the company, with Google having huge penetration rates both on mobile and on desktop devices. In addition, YouTube has retained its dominance in the video realm, and efforts like the Gmail service, the Chrome internet browser, and the Android operating system for mobile devices have been extremely popular as well.

Some investors worry that non-core projects like self-driving cars might end up siphoning profits from the more successful businesses. Yet those moonshots also carry some potential for outsized gains if they pan out well.

With NVIDIA having already generated impressive returns, its remaining upside is less clear than it was this time last year. Alphabet has room to move higher if it can keep delivering with its core business.