No company tops Samsung's name recognition in the virtual reality headset market right now, but it remains to be seen whether that will translate into a financial advantage.

Possibly no other consumer technology is getting as much attention as virtual reality (VR) right now. Tech companies are spending billions of dollars to develop new VR tech, or acquire it, and some, like Facebook (META 3.01%), believe that it could be the next major computing platform.

VR's market is poised to skyrocket over the next few years, jumping from $13.9 billion in 2017 to an estimated $143.3 billion in 2020. Part of this early growth will be fueled by VR headsets, which are expected to hit worldwide sales of 200 million for the six-year period ending in 2020, according to Tractica. 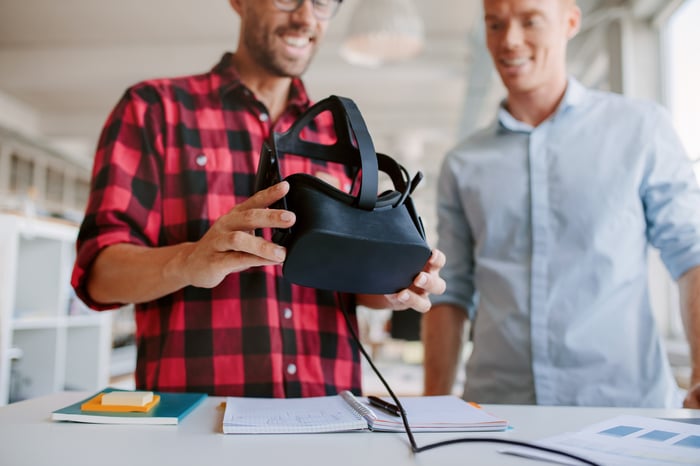 All of these stats point to potentially good times ahead for companies focusing on VR. The question, then, is which companies are beginning to dominate the space. A recent survey released by ReportLinker sheds some light on the subject, and shows that Samsung's (NASDAQOTH: SSNLF) Gear VR headset is already the most recognizable VR headset among consumers, and shows no signs of slowing down.

All signs point to Samsung

"More respondents quoted Samsung as a player in the new virtual reality industry: three out of ten respondents spontaneously mentioned the brand. There were less than 10% who could, last September," the survey said.

And when asked which VR headset respondents had heard about, survey respondents overwhelmingly chose Samsung's Gear VR. Take a look: 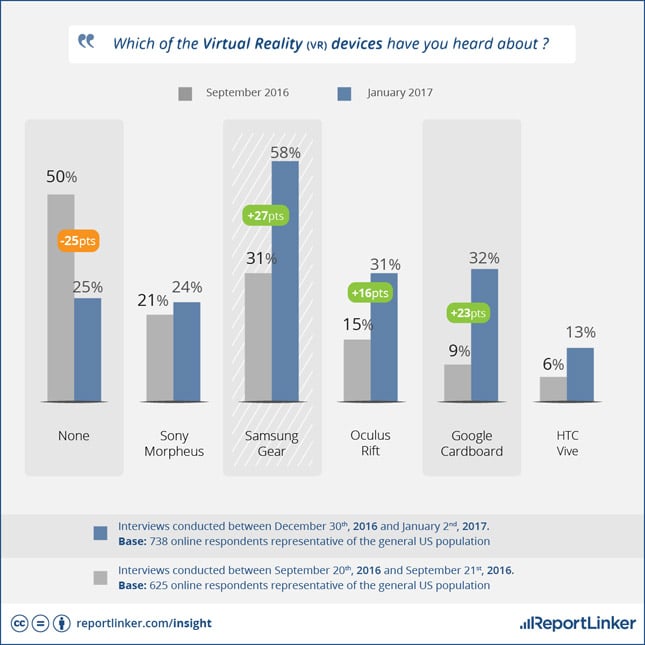 Let's take a moment to recap these stats. Samsung's brand is two times more recognizable for VR headsets than Sony or Oculus, and consumers have heard of its Gear VR headset at nearly double the rate that they've heard of the Oculus Rift or Google Cardboard. In the consumer market, that's a slam dunk for Samsung.

Can Samsung sustain this lead?

Nailing down why Samsung is the most recognizable VR brand and why its Gear VR is the most well-known device isn't an exact science. The ReportLinker survey suggests that increased marketing efforts over this past holiday season were a major factor:

"With marketers' efforts and the availability of VR headsets in stores before Christmas, more respondents were able to try them, which explains better awareness of the VR technology and brands," the survey said.

Samsung may be benefiting the most because its Gear VR headset launched over two years ago, which was earlier than both the Oculus Rift and Sony's Playstation VR, though it launched after Google's Cardboard. Samsung continues to aggressively market the Gear VR, and has recently started giving away a free headset when consumers pre-order its Galaxy S8 phone.

The bigger question for Samsung and its competitors is if, and when, VR will become profitable. Research firm IDC says that software and services -- and not hardware -- will eventually be the most profitable part of VR, but companies need to first get hardware into people's hands, of course.

Samsung might be dominating the VR headset name-recognition space right now, but investors should also keep a close eye on which companies are taking the lead in software and services. In that light, Google, Facebook and Sony could prove to be better long-term buys in virtual reality.