Get smart about the red-hot computer chip designer.

Shares of Advanced Micro Devices (AMD -1.95%) have absolutely crushed the market recently, soaring 366% higher in the last 52 weeks. You may know the company as an eternal foil to Intel (INTC 0.32%) in the market for PC processors, and AMD's duels with NVIDIA (NVDA -2.46%) in the graphics chip sector are also the stuff of legend.

The company currently shows negative profits but positive cash flows, and management hopes to have found a path back to sustainable black ink on the bottom line. Analysts tend to agree, painting a picture of healthy sales growth with a side of positive and rising profits over the next two years.

That's a snapshot of AMD's headline news. Here's a handful of facts that might be unfamiliar to many AMD investors.

1. From early days to the golden age

One year after Intel's founding fathers left Fairchild Semiconductor to start their own pioneering business, AMD's founders followed suit. Eight former Fairchild engineers and executives struck out on their own, under the helm of CEO Jerry Sanders. AMD shares started selling on the NYSE exchange in 1979.

Just three years after that, IBM (IBM 0.34%) reached out to secure a second source of processors for its recently launched PC systems. Working under an Intel license for x86 technologies, this became AMD's mainstay business for the next 35 years.

By 1995, AMD's K5 and K6 processors were putting significant pressure on Intel's PC market stature. The chips offered competitive performance at a much lower price point, forcing Intel to adjust its own pricing strategies.

In 1997, AMD presented its first Athlon processor. The company introduced many industry-first innovations over the next few years, like the first 64-bit x86 processor, the first dual-core PC processor, and the energy-saving PowerNow! and Cool'n'Quiet technologies. These were the days where AMD had Intel paying defense, catching up to AMD's innovations rather than the other way around. 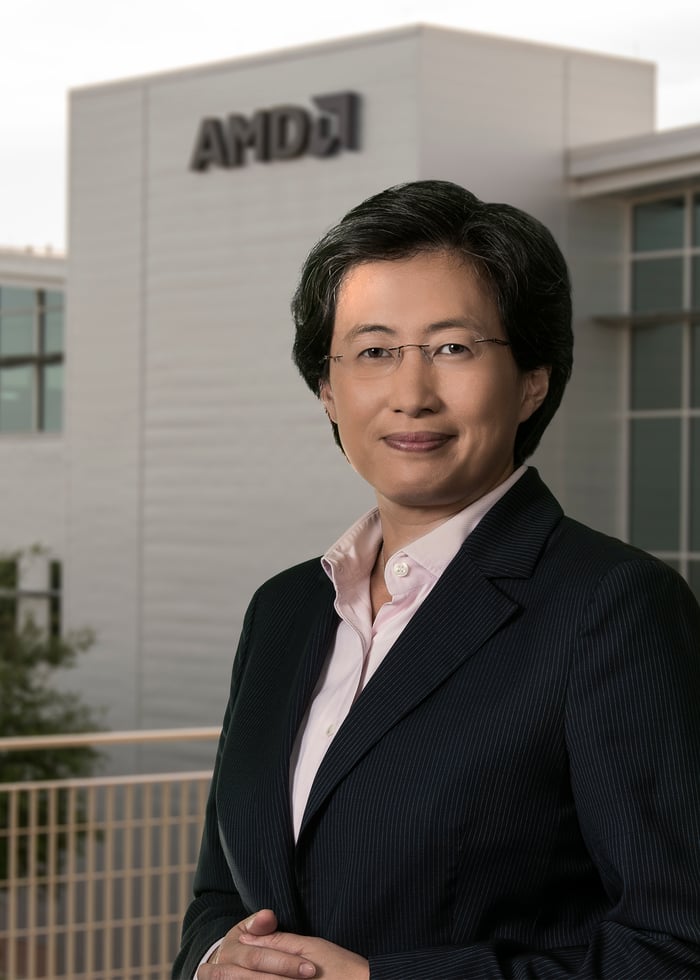 Jerry Sanders served as AMD's CEO for the first 33 years. On his retirement, the executive suite saw a flurry of four new CEOs in 12 years.

Current corporate leader Lisa Su brought AMD back to a technical focus that some of her recent, more business-oriented predecessors had lacked. During her doctorate work in electrical engineering at MIT, she advanced the idea of silicon-on-insulator chip-building technologies that AMD uses today.

Taking the helm in 2014, Su quickly established a new company strategy with a heavy focus on developing new technology to address growing markets. She had been pushing for such changes from the senior VP level, starting in 2012. Five years ago, some 90% of AMD's total sales were designed for use in PC systems. Su wants about half of her company's revenue to come from other markets such as gaming consoles and embedded systems, and had reached a 60-40 split between PC and non-PC sales by 2015.

3. AMD is not a chipmaker

Once upon a time, AMD built its own microprocessors in company-owned factories. A long-standing manufacturing research partnership with IBM helped to keep those chipmaking operations going. But things have changed.

Investment groups from Abu Dhabi started building ownership in AMD in 2007, and right at the darkest days of the 2008 financial crisis, that relationship led to AMD's manufacturing operations spinning off into a joint venture called GlobalFoundries. While the rest of the world seemed stopped in its financial tracks, AMD shares surged 30% in a single day on this news.

GlobalFoundries still counts AMD as its largest customer, but now operates as a completely separate business with plenty of supply contracts with other chip designers.

The manufacturing spinoff gave AMD a fighting chance to survive as Intel retook its throne while market conditions started to shift away from PC systems. The balance sheet lightened immensely when the GlobalFoundries separation closed in 2010.

AMD used the funds from that deal to pay down debt balances, and annual interest payments took a deep dive. Without the GlobalFoundries transaction, AMD probably wouldn't have survived this far. So AMD is now a fab-less chip designer, and better off for it.

AMD was a member of the S&P 500 index back in the Athlon-and-K6 heyday. The stock was dropped from that prestigious index in 2013 due to a plunging market cap, falling back to the lesser S&P MidCap 400 index instead.

As of March 2017, AMD is back in the big leagues. The stock replaced crumbling retailer Urban Outfitters before the opening bell on March 20. At the time, AMD investors could look back at one-year share price gains of 390% while Urban Outfitters suffered a 30% haircut over the same period.

Lisa Su is one of just 30 female CEOs among the 500 index members today. That's up from 23 female leaders two years ago, but the S&P 500 club is still hardly a model of gender equality.

In other stock-related news, AMD spent 33 years on the New York Stock Exchange before jumping to the Nasdaq exchange in December 2014. Then-CFO Devinder Kumar described the move as a way to align the company more closely with other technology businesses on that exchange, and also to provide better lines of communication with investors. But the NYSE charges significantly higher listing fees than the Nasdaq, and AMD can use every penny of cost-cutting it can get -- especially when the business of developing and selling computer chips doesn't suffer from the change.

The company has worked strictly within the Intel-compatible x86 world for decades, supplemented by graphics processors. Competing processor architectures from ARM Holdings -- now a part of the SoftBank Group -- were always more of a threat than an opportunity.

AMD secured a license to design an ARM-based processor, immediately inserted ARM-based solutions to handle security tasks in mobile processors, and announced that ARM-style server chips would be cut from whole AMD cloth as soon as 2014. Of course, Lisa Su was on stage for that announcement in her capacity as global products manager at the time. Her fingerprints are all over this project.

It took a bit longer than that, but AMD did indeed launch its first ARM-powered server processor in 2016.

The AMD Opteron A1100 puts eight high-end ARM cores together with enterprise features like built-in high-speed networking, fast access to system data via 8 PCI-Express lanes, and support for large quantities of DDR4 memory with error correction. It's a new system-building option for server manufacturers, offering low power consumption and a performance profile tuned for managing massive amounts of data transfer. The target market here is cloud-based storage platforms, and the Opteron A1100 series also works well as the storage-management component of a multisystem big data analysis solution.