Ford Motor Company (NYSE:F) took the wraps off of its all-new 2018 Lincoln Navigator at the New York International Auto Show this past week. It's the first all-new version of Lincoln's big SUV in a decade, and it signals Ford's intention to make a serious effort in a highly profitable niche of the market. 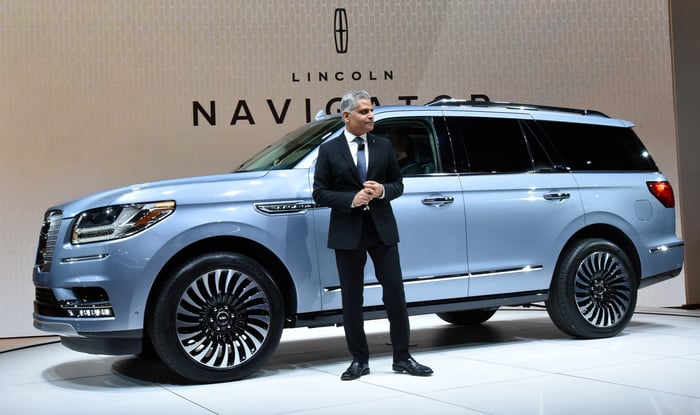 Everything about the 2018 Navigator is new. It's lighter, faster, roomier, and more luxurious than its predecessor, with a full complement of up-to-date technology. Stylistically, it's a close match to the concept version that Ford showed a year ago, minus the flashy (and wildly impractical) gull-wing doors.

The latest iteration of Ford's big luxury SUV is built on the bones of Ford's much-touted F-Series pickups, and the new Navigator includes some of the features pioneered with Ford's latest pickups, most notably aluminum-alloy body panels that shave off about 200 pounds of weight. 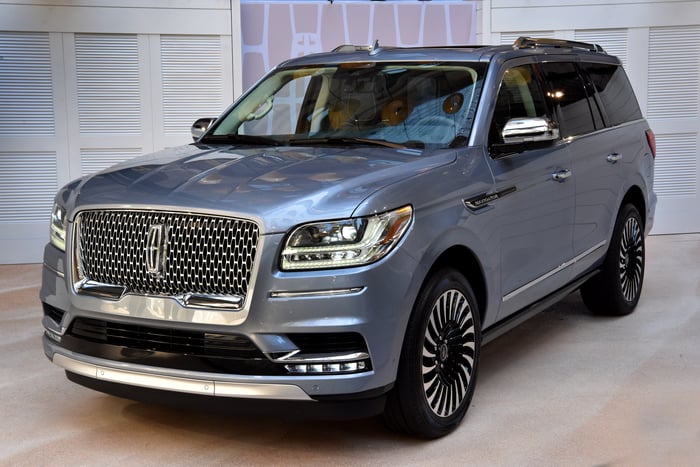 The all-new Navigator's details -- the wheels, the grille -- are not subtle. Image source: Ford Motor Company.

Inside, the Navigator has three rows of seating, with plenty of plush touches and a design view that follows the nautical-inspired themes seen in other recent Lincolns. Ford touts "first-class seating for all" in the new Navigator, and this six-foot-tall Fool's brief time inside one suggests that adults can indeed ride comfortably in all seats.

"When designing the Navigator, we put an emphasis on ultra-luxury touch points," said Lincoln's design chief, David Woodhouse. "We took everything the client would see and touch, and made sure it would look and feel a little more exuberant, a little more indulgent and incredibly beautiful." 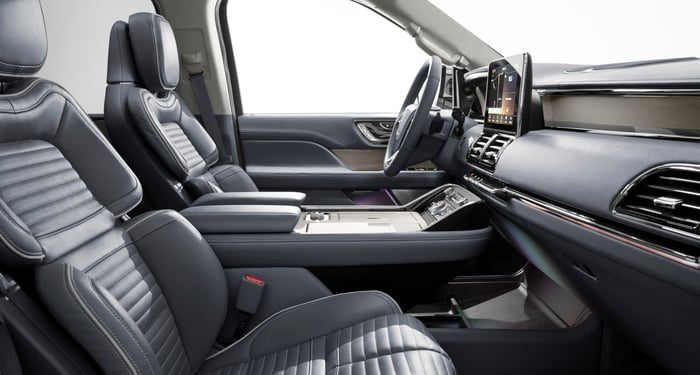 As with other recent Lincolns, technology is a selling point in the new Navigator. Ford's latest SYNC 3 touchscreen system with Apple CarPlay and Android Auto is standard, and 360-degree cameras, adaptive cruise control, and Ford's very useful Trailer Backup Assist are all available as options.

There's only one option under the hood, but it's a potent one: a 450-horsepower version of Ford's 3.5-liter EcoBoost V6, mated to a new 10-speed automatic transmission.

Years ago, the Lincoln Navigator was a serious contender in the very (very) profitable big-luxury-SUV segment, giving General Motors' (NYSE:GM) archrival Cadillac Escalade serious competition. But that competition turned into a one-truck show, as GM invested in the Escalade while Ford neglected its big Lincoln. Last year, the Escalade (combining regular and long-wheelbase versions) outsold the Navigator in the U.S. by almost 4 to 1: 39,092 to 10,421. 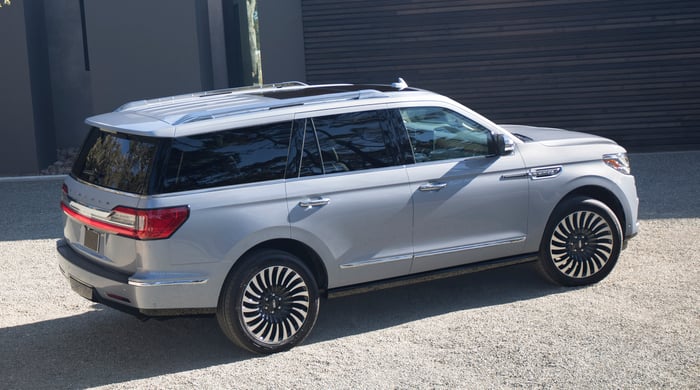 Those aren't huge numbers, but again: These are very, very profitable products. With SUVs hot, and luxury SUVs especially hot -- and the Escalade nearing the end of its current model cycle -- this completely new version of Ford's big luxury truck has a chance to gain significant market share.

What will it cost?

Pricing hasn't yet been announced. But expect it to start at a price a bit higher than the $63,515 starting price of the outgoing 2017 Navigator.

When will it go on sale?

The all-new 2018 Lincoln Navigator will begin to arrive at U.S. Lincoln dealers this fall, Ford said.