Some household names in solar may not be as price-competitive as advertised, and solar capacity is turning higher again this week in solar.

We're only a couple of weeks away from the solar industry's first-quarter earnings reports, which will give us an idea of how companies are doing in this dynamic year for the industry. Companies are grappling with low prices for solar panels and an unstable financing and demand environment across residential, commercial, and utility-scale solar.

This week, we got some interesting data on installation prices, as well as news that gave us clues about where suppliers may be headed in the future. Here's what we learned. 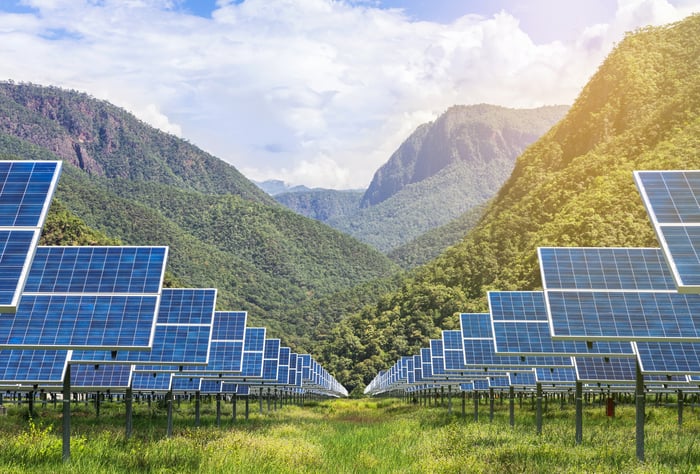 I've been warning that Tesla's (TSLA 11.00%) SolarCity, Sunrun (RUN 5.34%), and Vivint Solar (VSLR) are in a tough position competing against smaller, regional installers, and there's a new report backing that view with data.

A report by the National Renewable Energy Laboratory shows that large installers (Tesla, Sunrun, and Vivint) are pricing systems about 10% higher than smaller installers. Overall, large installers average $3.99 per watt to install solar, while smaller installers charge $3.62 per watt. When quotes for similar homes are matched, the difference is $0.33 per watt, which would be $1,980 for a 6 kW installation.

The higher cost structure for larger installers is now starting to show, and smaller installers are gaining market share and showing customers better pricing. This isn't good if you're looking at investing in one of the big installers.

Capacity is still being built in solar

PV-Tech released a preliminary analysis of global solar manufacturing capacity expansions this week, and February was an unusually big month for capacity announcements. In an industry that's already oversupplied and saw module prices fall about one-third last year, that may sound strange, but when you look at who's adding capacity and what they're adding, it makes a little more sense.

SunPower (SPWR 5.47%) will see the biggest expansion, with a 5 GW agreement in China. The news is based on Chinese media reports and the project hasn't been officially announced by SunPower yet, but look for something to be said about this capacity on the first-quarter 2017 earnings call. This would be related to SunPower's P-Series product, which uses commodity front-contact cells from third parties to make solar panels with slightly higher efficiency than competitors can make. The company has big hopes for the product, so watch any word on performance of the P-Series closely.

One thing that stands out about these expansions is that they're being made by the industry's biggest companies and they're trending toward technology that emphasizes efficiency. Slowly but surely, we're seeing a consolidation of power in solar, so differentiation on efficiency will be key going forward.

Here are a few other notable items for the week

That's all for this week in solar, but check back to Fool.com for more coverage.