Please ensure Javascript is enabled for purposes of website accessibility
Log In Help Join The Motley Fool
Free Article Join Over 1 Million Premium Members And Get More In-Depth Stock Guidance and Research
By Daniel B. Kline - Updated Apr 17, 2017 at 3:37PM

This could be very bad news for Walt Disney.

For decades, the cable industry has worked by forcing customers to take packages of channels that include some they probably don't want in order to get the ones they do.

That has been a boon to cable channel owners, who can support little-watched channels by getting cable companies to pay a few pennies per subscriber to carry them. Those charges are, of course, marked up and passed on to consumers.

In some ways, it's a system that, at the bottom of the cost structure, benefits everyone. You may enjoy Lifetime Movie Network, and your friend may enjoy the Game Show Network, and neither of you minds paying the few cents it costs for each channel you don't watch to force others to pay for the ones you do.

The problems come higher up the food chain, when you're no longer talking about pennies, but actually dollars for channels you may not watch. In this case, while you pay about $1.50 for TNT and $1.27 for Walt Disney's (DIS 1.08%) Disney Channel each, according to 2016 research from MoffettNathanson, the biggest culprit is another Disney property, ESPN, which costs pay-TV customers $6.10 each month. That's more than four times as expensive as the No. 2 most-expensive channel whether you like sports or not. 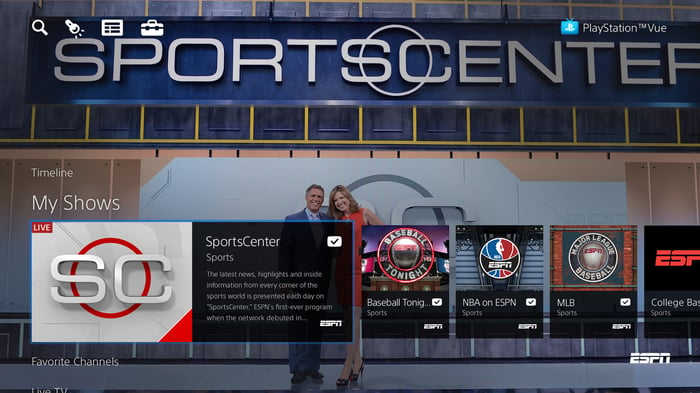 ESPN has been trying to bring its programming to alternative delivery channels. Image source: ESPN.

Why is ESPN so expensive?

For a very long time, ESPN was cable's golden child, because the audience that likes it, really likes it. Sports fans are dedicated, and the "Worldwide Leader" snapped up rights to everything from the National Football League to the National Basketball Association, along with a staggering amount of college sports. Gaining those rights cost billions of dollars, and that helped the company justify charging cable companies the highest carriage fee of any channel. And until very recently, cable customers – even those who don't watch sports – have been forced to subsidize ESPN for those who do because they had no other choice.

Before cord cutting became a thing, Disney held all the leverage with their cable-provider partners. The company could force ESPN into all but the most basic cable packages, because the outrage of the people who wanted it was a bigger threat than the idea that the added cost might force those who didn't to leave.

Now, cord cutting, dropping traditional cable for streaming options, has grown in popularity. The cable universe is slowly shrinking, and pay-television companies are having to offer different packages, including skinny bundles, or even a la carte choices to keep consumers on board. That could end up being a devastating one-two punch for Disney, because the results of 2016 survey (registration required) commissioned by BTIG researcher Rich Greenfield show that the majority of people would be willing to drop ESPN and its sister station, ESPN 2, if it saved them $8 a month.

The $8 number that BTIG used for the cost of ESPN and ESPN 2 is a little over a dollar higher than where the MoffettNathanson research would place the cost, but it's certainly within the same ballpark. In the survey, Greenfield asked two questions:

If ESPN were to launch a streaming service, not tied to a traditional pay-TV subscription, it would trigger clauses in many of its contracts that force cable companies to provide it to a certain (large) percentage of their customers. If pay-TV providers could offer ESPN-free packages, most would, and ESPN would probably not be able to make up that revenue with a streaming service.

"If 15% paid for an ESPN/ESPN2 DTC offering at $20/month, that yields $4.1 billion in revenue, dramatically below the nearly $9 billion the two channels generate from the legacy MVPD ecosystem," Greenfiled wrote. "To make matters worse, as we mentioned above, these DTC subscribers could churn on/off whenever they want (i.e., NFL fans only would have to subscribe for football season). In turn, the actual revenue from a DTC model would be significantly lower than $4 billion."

ESPN is a drag on Disney

Disney blamed its struggling sports channels for its 2% drop in Q2 revenue in its cable networks division, where operating income also fell by 11%.

ESPN is losing customers because people who don't watch ESPN don't want to pay for it. They may not think of that way, as the decision to cut the cord may be about paying for a lot of channels the consumer doesn't want to, but the sports network has, and will, feel it the worst.

Because streaming is not a viable option, Disney is going to have to cut ESPN's cost structure if it wants to restore previous levels of profitability. It's been doing that by dropping some high-paid talent and laying off some behind-the-scenes personnel, but the savings there are tiny compared with what it pays in rights fees.

The wild card for Disney is what the market will be when major rights packages come up. If ESPN can retain most of its properties, but at lower costs, then it can effectively reverse its earnings course, even as it loses subscribers. If it has to let valuable content go to a rival, ESPN does save money, but it also becomes less valuable to consumers, speeding up subscriber loss.

What's unknown is, as these deals come up over the next few years, whether rivals such as TNT, and the Fox Sports channels will bid aggressively or whether sports leagues will mostly have to settle for smaller deals. If all players in the space show restraint, then ESPN may be able to hold on to many of its rights packages, but that seems unlikely in a market where there remains money to be made by gaining on the established leader.