With a rock-solid balance sheet and a clearly visible growth profile, this renewable MLP is a better investment for investors looking to add a clean energy cash flow stream to their portfolio.

However, one renewable income generator that hasn't lost investors a boatload of money is Brookfield Renewable Partners (BEP 0.07%), which has delivered an 8% annualized total return over the past five years. Meanwhile, with rock-solid financials and a clearly visible growth profile, Brookfield Renewable expects to generate total returns in the 12% to 15% range over the long term. These factors are just some of the reasons that, in my opinion, it's a better investment option than a yieldco. 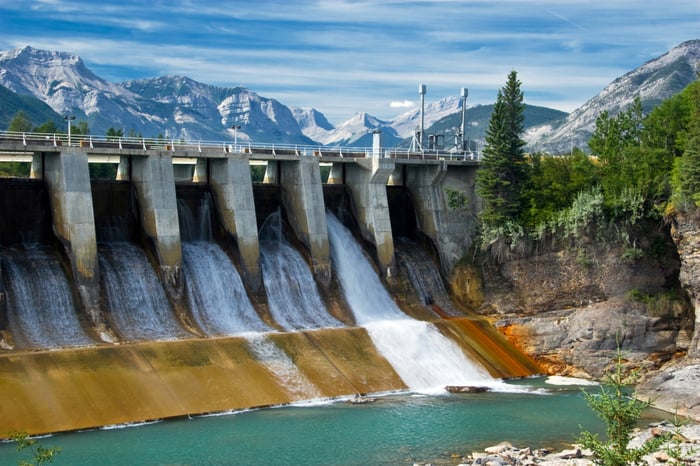 Brookfield Renewable Partners is one of the largest independent renewable-power generators in the world. It controls 260 facilities in North America, South America, and Europe. However, what sets it apart from most yieldcos is that 88% of the electricity it generates comes from hydroelectric assets. But it also has a growing wind business. Further, it's in the process of acquiring a solar-power platform after agreeing to invest $500 million in a transaction along with parent company Brookfield Asset Management (BN 0.78%) to buy TerraForm Global (NASDAQ: GLBL) and a 51% controlling stake in TerraForm Power.

That pending deal aside, Brookfield Renewable's bread-and-butter business is hydropower. That's by design, because it loves hydropower's distinguishing characteristics. For example, these assets generate a high cash margin of around 60% to 70%, are carbon-free with storage capabilities, are low-cost and don't rely on government subsidies, and are truly renewable because they have a perpetual life while wind and solar assets typically last around 25 years. As a result, 98% of the cash flow generated by hydro is a return on capital as opposed to a return of capital. In the case of wind and solar, the split is 65%/35%.

Brookfield Renewable versus the competition

The focus on hydropower isn't the only thing that sets Brookfield Renewable Partners apart from yieldcos. There are several other differentiating factors: 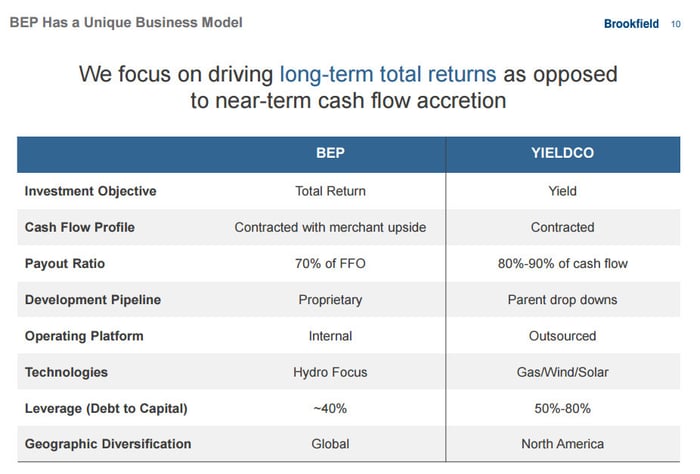 One of the most important differences is that the company uses less leverage than the average yieldco, so it has a solid investment-grade credit rating of BBB, which gives it open access to the capital markets to finance acquisitions. Meanwhile, too much leverage has gotten yieldcos into trouble in recent years. TerraForm Power, for example, has junk-rated credit, which limited its access to the capital markets. That's one reason it has decided to link up with Brookfield, which agreed to provide it with $500 million in acquisition capital. Meanwhile, NRG Yield also has junk-rated credit, while both NextEra Energy Partners and 8point3 Energy Partners have high leverage ratios.

Another significant difference between Brookfield Renewable and its peers is that the company retains about 30% of its cash flow, which it reinvests into growth projects. Currently, the company has several wind and hydro projects in its pipeline that should steadily grow cash flow over the next few years as they enter service. Contrast this with most yieldcos, which pay out 80% to 90% of their cash flow and therefore must rely on outside capital to finance drop-down acquisitions from their parent company. If that money source dries up, which was the case for TerraForm Power, it becomes impossible to grow.

Further, drop-down transactions often cost more than internally developed projects because the buyer pays a multiple of the cash flow generated by the asset as opposed to the actual construction costs. For example, NRG Yield's parent bought 1,500 MW of solar and wind projects from TerraForm Power's bankrupt parent late last year for $183 million. It then flipped 265 MW of those assets plus a 16% stake in an $800 million solar plant to NRG Yield for $594 million. Contrast this approach with Brookfield Renewable, which grows by developing proprietary projects and targeting distressed companies such as TerraForm. That focus on value-driven growth is the reason the company believes it can deliver double-digit total returns for investors over the long term. Yieldcos, on the other hand, offer high current yields that have questionable long-term stability because of their weaker financials.

Yieldcos promise investors a growing cash flow stream generated by renewable power. However, they haven't yet lived up to that hype, in part because of their more aggressive financing approach and focus on acquisitions to drive growth. Brookfield Renewable Partners, on the other hand, has generated not only consistently growing income but also higher total returns, all with less risk. That's why, in my opinion, investors should forget about investing in a yieldco and buy Brookfield Renewable instead.