Apple stock has been rising on a wave of analyst euphoria, but this could be a good time to take some profits.

In late January, Apple (AAPL 2.44%) blew past analysts' earnings estimates for the first quarter of its 2017 fiscal year, lifted by strong sales of the iPhone 7 Plus.

Apple stock surged in response. The stock had been trading around $120 before the earnings report, but it moved steadily upwards toward $140 during February. For the past month, Apple shares have remained in a $140 to $145 trading range, up more than 20% year to date. 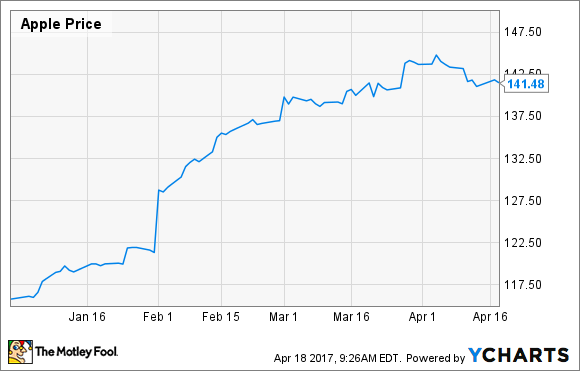 These share price gains have been helped along by numerous analyst upgrades and price target increases. This optimism could indicate that investors are finally giving Apple credit for its long-term growth prospects. But it could also mark the beginning of a new bubble in Apple stock. As a result, I have already sold a small portion of my Apple shares -- and I'm thinking about selling more. Here are three key reasons why Apple stock's gains may not last.

What comes after the iPhone 8?

Notwithstanding their overall bullishness, analysts may still be underestimating the potential sales lift Apple will get from its next flagship iPhone (possibly called the iPhone 8).

Most pundits agree that Apple is making significant design changes this year, in honor of the iPhone's 10th anniversary. This could spark a big replacement cycle among loyal iPhone users, similar to what Apple saw after releasing the iPhone 6 in late 2014. Moreover, the iPhone installed base has grown significantly since 2014. The iPhone 8 is also likely to become a status symbol in China, driving strong sales there.

The problem for Apple is figuring out what comes next. Assuming that there is sufficient supply, the iPhone 8 should be able to drive strong revenue and earnings growth at Apple beginning this fall and continuing throughout 2018. But by 2019, sales could be slumping again, in line with Apple's 2016 performance. iPhone sales are likely to surge next year, but the gains may not be sustainable. Image source: Apple.

With each successive iPhone product cycle, growth will be harder to come by, due to slower smartphone market growth, longer replacement cycles, and competition from brands that offer more affordable flagship phones. In the long run, Apple faces the risk that its iPhone cash cow will be disrupted by new technology. Thus, investors probably shouldn't count on the iPhone to be a long-term earnings growth driver beyond 2018.

Most Wall Street analysts recognize that iPhone sales won't keep growing forever. Furthermore, due to Apple's massive size, it's hard for any new products to move the needle. That's why many analysts are counting on Apple's services business to drive the company's future growth -- and send Apple stock to new heights.

Apple has set out an ambitious goal of doubling its services revenue to around $50 billion over the next four years. This may be achievable, especially if Apple is able to launch a long-rumored subscription video service.

However, analysts may be overestimating the long-term profitability of Apple's services business. Today, the services segment may earn gross margins as high as 70%. However, the new (and relatively fast growing) Apple Music service has a much lower gross margin. The same would almost certainly be true of any Apple subscription video offering.

Even the App Store -- which currently produces the biggest chunk of Apple's services revenue and profit -- isn't a silver bullet. Apple appears to have reduced its cut of certain App Store sales late last year, which could negatively impact App Store revenue growth and profitability.

The bottom line is that while services growth should provide a meaningful amount of revenue growth in the coming years, the services segment's profit margin may decline. This will limit the impact on Apple's earnings.

Will tax reform happen -- and what will it look like?

A third risk is that meaningful corporate tax reform may not occur. A few months ago, it seemed all but certain that the U.S. would significantly reduce or abolish its tax on repatriated foreign earnings. This would encourage Apple to repatriate more than $200 billion of foreign cash, paving the way for a big special dividend, massive share buybacks, or transformative acquisitions.

However, Republican infighting has scuttled attempts at healthcare reform thus far. This raises big questions about President Donald Trump's ability to implement other parts of his agenda, including tax reform.

Even if tax reform does get passed eventually, the benefit to Apple will depend on the exact terms and tax rate that would be applicable. Furthermore, it's not clear how aggressive Apple would be about returning repatriated cash to shareholders. Lastly, the recent run-up in Apple's stock price means the company wouldn't be able to buy back as many shares even if it is able to repatriate lots of cash.

I still believe that Apple has a bright future. But analysts may be overestimating its post-2018 earnings growth potential. If Apple stock continues rallying in the weeks and months ahead, I plan to trim my holdings further.