AMD's stock has skyrocketed over the past 12 months and Ambarella has made solid gains of its own, but both companies face challenges ahead.

The semiconductor industry isn't for the faint of heart. Competition is typically extremely fierce, product cycles force companies to keep betting on the next breakthrough chip, and in an effort to win spots in major devices, chipmakers often sell at lower prices than they'd like.

For those reasons, it can be difficult to pick winners in this space. That's why investors considering Ambarella (AMBA -3.99%) and Advanced Micro Devices (AMD -1.95%) should know the opportunities and risks for both companies so let's take a quick look at what each is doing: 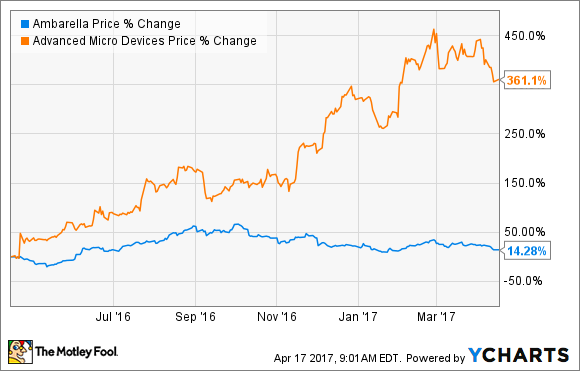 AMD is a key player in graphics processing unit (GPU) space with about 29.5% of the discrete desktop GPU market. NVIDIA (NVDA -2.46%) takes the rest of the market, but investors should remember that this time last year AMD held just 21.6% market share, so the company is moving in the right direction. Additionally, AMD is set to release a new GPU architecture later this year called Vega, which could help the company wrest a little more market share away from NVIDIA as well.

It's highly unlikely that AMD will overcome NVIDIA in the GPU space, but the former is still  making solid advancements across its key business. The company posted higher sales of GPUs in Q4 2016 than it has in the past 11 quarters. AMD is also a major supplier of semicustom console chips for Sony and Microsoft, the latter of which is expected to launch a new device, called Project Scorpio, later this year. Morningstar analyst Abhinav Davuluri believes that semicustom design wins like this could spur growth in this segment by low double digits over the next four years.

It's worth pointing out that despite its massive stock price run-up right now, the company has had a net operating loss for at least the past three years. Investors currently value it at more than $11 billion, while AMD's operating income loss was $372 million last year. That means AMD would have to churn out massive profits in the coming years to catch up to its current valuation. 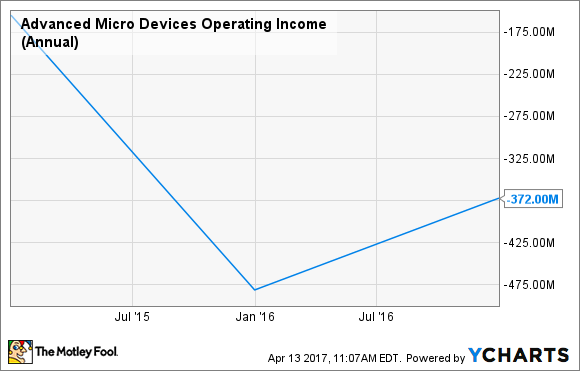 Ambarella's story is largely one that's built around GoPro (GPRO -1.25%). Pacific Crest estimates that 25% of Ambarella's 2016 revenue came from from the action camera maker. Ambarella's reliance on GoPro was fine when things were going well with GoPro's sales, but lately the camera maker has hit one roadblock after another, most recently with the recall of its much-anticipated Karma drone.

Ambarella does deserve credit for expanding its chip sales beyond GoPro into the security camera maker, DJI drones, and cars. But even with even with that diversification sales in fiscal year 2017 fell by nearly 2% from a year ago, and the company's management has noted that changes to GoPro's business could weigh on Ambarella's revenue this year.

"[B]ased on our current level of interaction with GoPro on product development activities, we believe GoPro is incorporating a competitive chip for at least one new mainstream camera product, which will negatively impact our revenues in the second half of the year," Ambarella CFO George Laplante said on the fourth-quarter earnings call.

I did a comparison of these two companies about four months ago and said at the time that any pullback in sales from GoPro could bring further instability to Amberella, but if it was able to diversify revenue enough, then the company could become a solid long-term play. Unfortunately, it appears the GoPro pullback is the main story right now. Sure, Ambarella is diversifying sales to other players, but I don't believe it's happening fast enough. Management said that sales growth for fiscal 2018 will be between 3% growth to a 3% drop, compared to fiscal 2017.

At the same time, I find it difficult to recommend AMD after its current stock price growth, compared to net losses. The company is certainly making strides in GPUs and semicustom chips, but with investors already pushing the stock price up more than 360% over the past 12 months, I think AMD's opportunities have already been worked into the company's price.

In this face-off, AMD looks like the better business, but investors may want to wait and see if any short-term hiccups offer better entry points down the road.