The new "server-grade" all-in-one desktops are due out later this year.

Apple (AAPL 1.62%) made a rare move earlier this month in acknowledging that its 2013 Mac Pro suffered from some fundamental design flaws (mostly around thermal management) that prevented the professional desktop from being regularly upgraded with refreshed specs. Marketing chief Phil Schiller also teased that Apple was planning on introducing iMacs that are more geared toward professional users, since the company's flagship all-in-one (AIO) desktop is also extremely popular among professional users.

These "configurations of iMac specifically with the pro customer in mind" are expected to launch later this year. According to John Gruber, software chief Craig Federighi added, "But there's still even further we can take iMac as a high-performance, pro system, and we think that form factor can address even more of the pro market." As such, it's no surprise that rumors are now starting to appear about these presumed "iMac Pros." 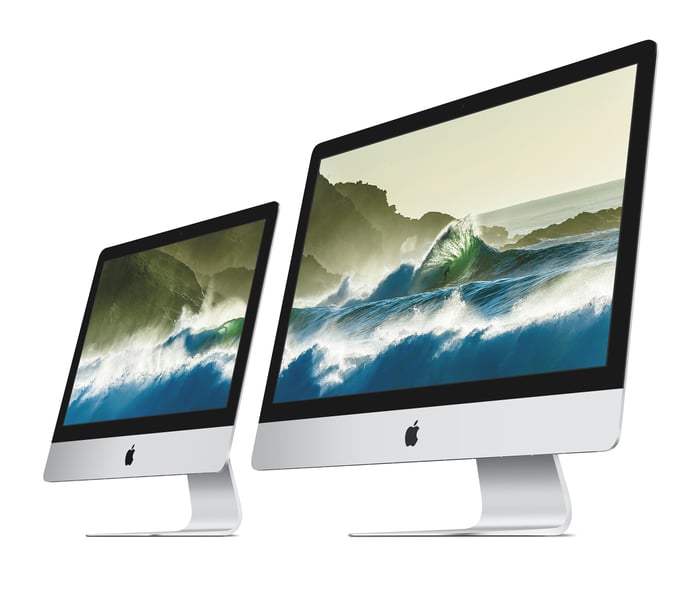 DIGITIMES reports that two new iMacs are set to begin production next month ahead of a launch in the latter half of 2017. That could potentially include a "new server-grade iMac for the high-end sector" that could compete with Microsoft's (MSFT 1.07%) new Surface Studio AIO launched late last year. DIGITIMES estimates that the AIO subset of the PC market sells about 12 million to 13 million units annually.

Like the broader market, AIO average selling prices (ASPs) trend down over time, but at a relatively slower rate due to less competition compared to more popular categories like laptops. AIO ASPs may rebound, particularly if you assume that Apple's professional iMac will be priced at a premium; Surface Studio starts at a pricey $2,999 but reaches up to $4,199.

It's worth noting that Apple has decidedly shut down the idea of a touchscreen iMac, maintaining its long-standing position that touchscreen PCs are an ergonomic nightmare. Schiller added, "Touch doesn't even register on the list of things pro users are interested in talking about. They're interested in things like performance and storage and expandability." That will be an important differentiating factor between the iMac Pro and Surface Studio.

Quanta Computer will be the contract manufacturer for the two new iMacs, according to the report. The "server-grade" iMac will reportedly use Intel's Xeon E3-1285 v6 processor, which should significantly boost performance for the professional market; the current Mac Pro uses Xeon E5 processors. There's no mention of any design changes, so the new models may sport the same overall tapered look that was introduced in 2012.

The real question is whether or not these new iMac Pros can indeed satisfy the needs and demands of Apple's professional user base, which is rightfully feeling a bit neglected at the moment. In addition to the lack of Mac Pro updates, the whole Donglegate situation with the new MacBook Pros also alienated some users that don't want to spend even more money on a collection of dongles and then have to lug said dongles around as well.

It's going to be at least another year until Apple's redesigned modular Mac Pro sees the light of day, and it could very well be two years since it seems like Apple has only very recently begun development of the new model. Hopefully, these new iMac Pros can appease the professional crowd and buy Apple some time.