Please ensure Javascript is enabled for purposes of website accessibility
Log In Help Join The Motley Fool
Free Article Join Over 1 Million Premium Members And Get More In-Depth Stock Guidance and Research
By Rich Smith - Apr 18, 2017 at 11:42AM

I'm afraid it's bad news for investors in PACCAR (PCAR 0.79%) stock today -- and owners of Cummins (CMI 1.73%) stock, too. Elon Musk is building an electric truck, and at least one analyst thinks that could spell doomsday for Cummins and PACCAR.

The news first broke last week, when Tesla (TSLA 4.67%) CEO Elon Musk tweeted that he has a "Tesla Semi truck unveil set for September." That may have been a lot sooner than investors were expecting, given that Tesla doesn't even have its Model 3 sedan on the market yet. It certainly seems to have spooked investment banker Piper Jaffray, which responded by downgrading shares of both PACCAR and Cummins this morning.

Here are three things you need to know about why it did that. 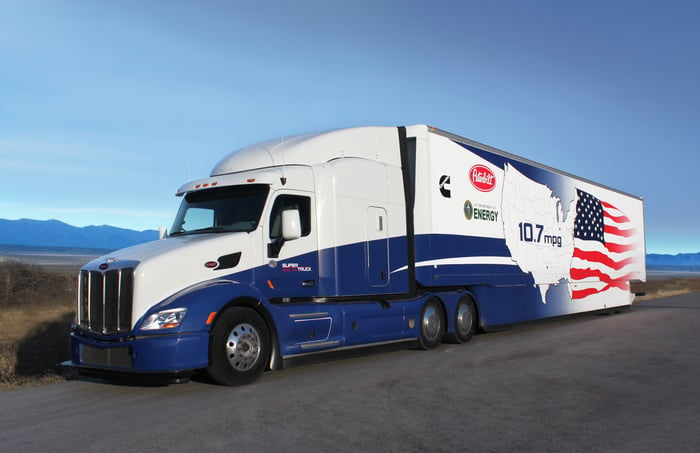 1. Why PACCAR and Cummins should fear the coming E-pocalypse

PACCAR builds semis -- the enormous tractors that pull the trailers that make up the 18-wheelers on our highways, carrying goods to and fro. Cummins builds internal combustion engines to power those semis. As such, Musk's intention to build an electric truck capable of doing the same work that PACCAR's trucks do, and with a power source that could be more efficient than Cummins' and that will certainly look "greener" to environmentalists, poses a direct threat to the business models of both PACCAR and Cummins.

Piper Jaffray makes no bones about this. In a downgrade reported this morning on StreetInsider.com, the analyst warns that Tesla's new "Class 8" electric truck will have a "potential disruptive impact" on PACCAR.

That makes sense. Even if Musk only unveils a model truck in September, and does not actually begin offering one for sale, PACCAR could see an impact on its own sales and profits, as truck companies hedge their bets and potentially put off purchases of old-tech trucks in order to be able to spend that money on battery-powered Tesla semis later.

3. Why Cummins should worry, too

The news is no better for Cummins. As TheFly.com writes, Piper is worried that "companies like Tesla are aiming to supplant [Cummins'] products." And while intention isn't accomplishment, Piper believes the risk is real enough to begin taking chips off the table.

After all, Cummins shares are up 25% over the past 52 weeks, versus only a 15% gain for PACCAR stock. Piper Jaffray believes that "Cummins' multiple has expanded to a fair level," and there's little left to be gained by buying the stock -- and perhaps a lot to be lost if Tesla succeeds in supplanting Cummins' internal combustion engines as the standard for powering semis.

Curiously, at the same time as Piper is downgrading Cummins stock to neutral, and cutting its price target by 10% (to $144 per share), the analyst is raising its estimates for the company's earnings both this year (to $8.14) and next ($9.59). These are strange moves in a downgrade, but perhaps Piper sees the risk from Tesla as farther out, and not so immediate as the risk posed to PACCAR.

Bonus thing: Keep your eye on the profits ball

The one thing Piper doesn't spend a lot of time on in making either of these downgrades is pointing out that while Tesla may pose a threat to PACCAR and Cummins, that doesn't necessarily make Tesla stock a better investment than either of them.

Remember: Even if Piper is cutting profits estimates for PACCAR and Cummins this year, it still expects both companies to be firmly profitable this year, and next year as well. In contrast, Tesla -- which Piper Jaffray likes -- is not expected to earn any kind of profit either this year or next, and may only earn as little as $0.20 per share in 2019.

So even if I agree in general with Piper's assessment that Cummins stock costs too much at 18 times earnings, and that PACCAR costs much too much at 44 times trailing earnings (and I do agree), that doesn't necessarily make Tesla a buy at infinity-times-negative earnings. Small consolation to Cummins and PACCAR investors, I know -- but the numbers don't lie.

Even if Cummins and PACCAR stocks are not buys, I don't believe that Tesla stock is, either.