Please ensure Javascript is enabled for purposes of website accessibility
Log In Help Join The Motley Fool
Free Article Join Over 1 Million Premium Members And Get More In-Depth Stock Guidance and Research
By Timothy Green - Updated Apr 18, 2017 at 11:36AM

The specialty retailer had a bad first quarter, but not as bad as the market expected.

Shares of vitamin and supplement retailer GNC Holdings (GNC) surged on Tuesday following the company's better-than-expected first-quarter report. Despite decreasing revenue, GNC beat analyst estimates for both revenue and earnings, prompting investors to push the stock up 21% by 11:15 a.m. EDT.

GNC reported first-quarter revenue of $644.8 million, down 3.6% year over year but about $17 million higher than the average analyst estimate. Same-store sales dropped 3.9%, a bad result on an absolute basis, but substantially improved from the 8.6% decline reported during the fourth quarter of last year. 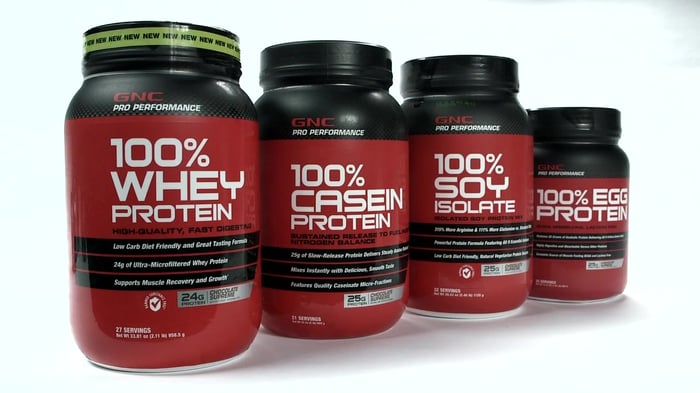 GNC's turnaround effort, called One New GNC, gained some traction during the first quarter. The number of transactions grew by 9.3%, driven by the company's new reward programs and simpler pricing. The average transaction amount slumped by 12.1%, however, leading to lower sales. Sales at GNC.com fell by 7.2%, but the company's launch of an Amazon storefront contributed to that drop.

Non-GAAP earnings per share came in at $0.37, down from $0.69 in the prior-year period but $0.03 better than analysts were expecting. Lower sales and higher operating costs drove the steep descent, with selling, general, and administrative costs rising 12.2% year over year.

GNC Interim CEO Bob Moran noted that the turnaround effort was still in its initial stages, but that the progress so far was encouraging: "The One New GNC, represents a fundamental change in our business model and in the first quarter of 2017, we saw those transformational changes begin to bear fruit. We're encouraged by positive trends in transactions, and by the early performance of our new loyalty programs, which are demonstrating their power to increase consumer frequency and spending."

While GNC's first quarter wasn't the catastrophe the market was predicting, it was still a poor performance. Same-store sales remain in decline, and earnings fell off a cliff due to higher costs. GNC's new free reward program, myGNC, now sports 5 million members, and transaction growth is certainly a good sign. But there's plenty of work left to do.

Will Cannabis Products Bring Shoppers Back to GNC?

Are the Bears Right About GNC Holdings?