2017 could be a year of growth for the casino companies. These three could be the best positioned for it.

The gaming industry has taken investors on a wild ride the last decade, but after a rough couple years, it could be set for big wins in the year ahead. Here's why Wynn Resorts (WYNN -1.66%), Las Vegas Sands (LVS -0.58%), and MGM Resorts International (MGM -3.19%) are three casino stocks that look ready to win in 2017.

State of the gaming industry

Las Vegas has been on a steady growth path the last few years, and in 2016 more than 43 million visitors brought billions of dollars to the city. Gambling revenue has continued to grow there, but has become a smaller proportion of overall spending; non-gaming entertainment like hotel, restaurant, and live entertainment sales now make up the majority of total Las Vegas visitor spend. 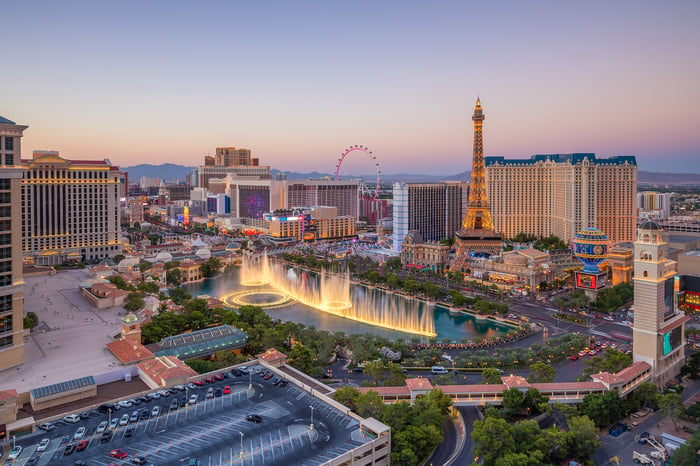 Moving on to Macau -- following the market crash there in the summer of 2014, when government restrictions on visitation and gambling spending on the island sent year-over-year gaming revenue comparisons spiraling down for 26 months, the Macau market actually seems to be back in a growth phase. Since August of last year, those gaming growth rates have steadily ticked back up, and Macau's gaming revenue for the month of March was 18% higher than March 2016.

Another region that looks promising now is the U.S. East Coast, with MGM's new resort outside of Washington, D.C., showing promising signs of success and Wynn Resorts' management building excitement about an upcoming resort near Boston. However, the most interesting region to watch next will be Japan, which after years of debate finally paved the way for legalized casino resorts. There will certainly be plenty of hurdles before any casino companies might be given a license to start construction, but many analysts believe that this could be the biggest growth driver in the gaming industry in years.

Wynn Resorts has performed very well lately, but while its stock is up about 33% year to date, it's still less than half of what it was in March 2014. The company looks like the most expensive stock of the three in the table above measured by P/E, but consider that the company just spent $4 billion in the last few years to open its new Wynn Palace in Macau, which opened in August. Wynn Palace in Macau already seems to be performing well, and it should add hundreds of millions in earnings before interest, taxes, depreciation, and amortization (EBITDA) in 2017 and 2018. Wynn is trading at just 24 times next year's earnings estimates, an encouraging sign of its expected growth.

Other than Macau's turnaround and its new resort there, Wynn is also making bets on the U.S. that could add long-term value. Last year, CEO Steve Wynn announced his intentions to overhaul the famous Wynn Las Vegas by 2020 with a massive clear-water lagoon and many new entertainment options outside of gambling, as a well as a new 1,000-room hotel. Wynn also recently started construction on Wynn Boston Harbor, just outside of downtown Boston, which is expected to open in 2019.

MGM dominates Vegas, but could make waves in Macau soon

MGM is by far the dominant force in Las Vegas, with major properties all up and down the Las Vegas Strip. It also controls a significant percentage of the hotel rooms and entertainment venues there. While Vegas' gaming market is stable even if low growth, its non-gaming entertainment revenue -- such as hotel and entertainment sales -- are growing at a healthy clip.

MGM opened the T-Mobile Arena last year. It hosts concerts, conventions, and soon Vegas' new NHL team -- the Golden Knights -- which begin play in the '17-'18 season. Another strong point is MGM National Harbor, the company's newest resort located just outside of Washington, D.C. National Harbor has only been open since December, but is already looking strong and is expected to add a substantial EBITDA boost for the company this year and next.

However, what could really drive some major growth for the company is its own new resort opening in Macau within the next few months. MGM is the last of these companies to open a Macau resort after it was pushed back for months, but that could prove to be great timing, as the market looks much stronger now. The resort includes 1,400 hotel rooms, and could be a game changer for the company's earnings in the next few years. 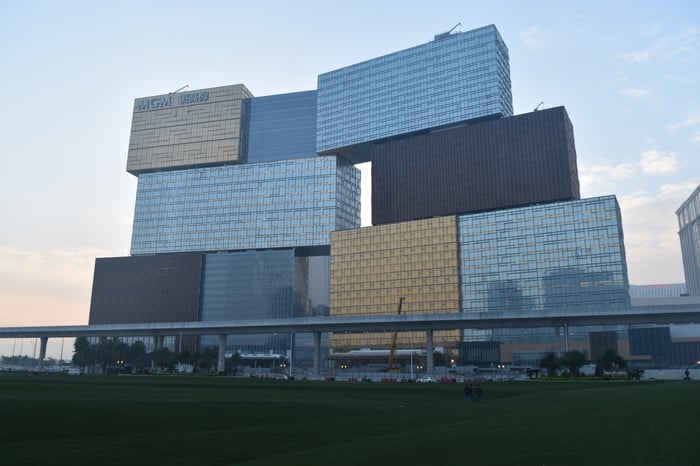 Las Vegas Sands could be the biggest winner of all

Las Vegas Sands is the largest of these companies by market cap, but looking at the relative success of its peers in 2016, it looks like the only one unable to post growth. While the company did see declines in revenue and growth in 2016, that's expected to turn around in 2017 and 2018, as it's one of the largest players in Macau and its new resort there that opened last fall increases its market dominance and chances of gaining on the market's regrowth. Las Vegas Sands has five properties in Macau, and by far the most hotel rooms and gaming tables, which should prove to be a big advantage as visitation there continues to grow.

Las Vegas Sands is also the most diversified of these gaming companies, with resorts in Las Vegas, Macau, and on the U.S. East Coast, as well as a flagship resort in Singapore, which has set the company apart in the region. It could also be the company with the best chance of getting a license to build a resort in Japan. While trying to sway legislators to legalize casinos, Japanese Prime Minister Shinzo Abe talked about how well the Singapore model of integrated resorts worked to bring tourism and entertainment to the country -- including the high-profile Marina Bay Sands resort there.

The last few years have been rough for the casino industry, but these companies are already off to a great 2017 ahead of their coming Q1 earnings releases that are expected to be largely positive. While there are certainly still plenty of risks going forward, the shift toward more diversified revenue by region and entertainment type seems to be boding well for these companies, and could lift them higher in 2017 and the years to come.