Qorvo is a collection of assets brought together by the merger of RF Micro Devices and Triquint Semiconductor. Here's why I'm avoiding the stock.

As investments go, Qorvo Inc. (QRVO 3.61%) is not my cup of tea. The company has numerous characteristics that are not appealing to my investment style and leads me to believe there are better places to invest.

Here are four factors that make me reluctant to invest in Qorvo.

Let's put Qorvo under the microscope and examine these factors more closely. 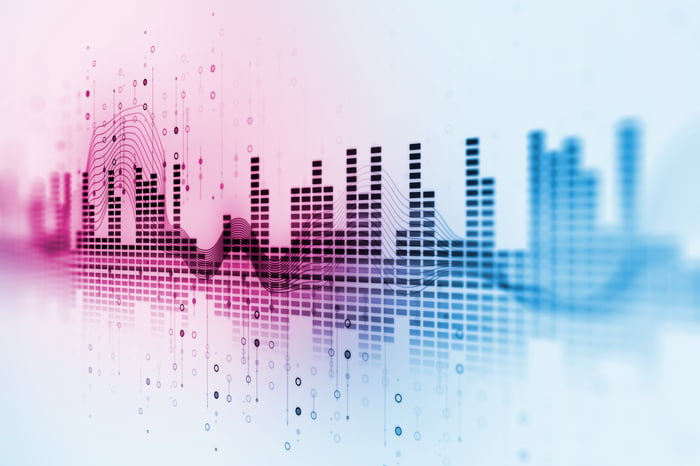 Where does Qorvo come from?

Qorvo came into being on Jan. 1, 2015, when RF Micro Devices (RFMD) merged with Triquint Semiconductor. Prior to merging, each of these companies had made numerous acquisitions and mergers. Below is a table showing different entities acquired by the companies in question.

Aside from the history lesson, the important takeaway is that Qorvo consists of the remnants of at least 11 different semiconductor companies along with land, buildings, property, and equipment.

Many acquisitions lead to challenges

Qorvo's business is rooted in analog semiconductors. These devices, unlike digital semiconductors, are typically fabricated in a company's own foundry. A semiconductor foundry is a very expensive asset that requires continual upkeep to stay competitive. If a company does not have the ability to raise prices, it's very difficult to be consistently profitable due to the high operating cost and capital expenditures to keep the foundry running.

Because of how it came into being, Qorvo has many foundries that were brought into the company over time. It was not set up as one company to operate efficiently as much as it has become a collection of assets.

Below is a chart illustrating two problems that Qorvo has. The company's quarterly gross profit margin is rarely above 40%, which is an indication it has little pricing power. Its operating margin tends to be below 5%, which demonstrates how costly it is to run all these manufacturing sites. A company that has high operating costs and cannot raise its prices to offset those costs is trapped in a very difficult business model. 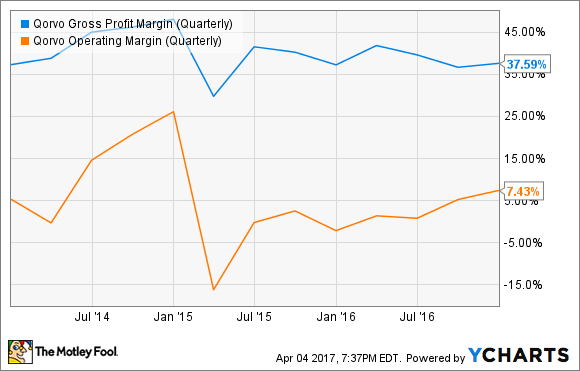 Is this a simple business?

Managing this collection of assets must be quite a challenge. An item that caught my attention displays the complexity of the business. It is management's explanation of GAAP (unadjusted) vs. non-GAAP (adjusted) accounting. The third-quarter earnings press release has no less than 15 paragraphs devoted to this topic.

Here is an example of what management says in the report:

When I see a company that is comprised of multiple acquisitions state that it wants investors to ignore restructuring and disposal costs, acquisition and integration costs, intellectual property rights litigation costs, and start-up costs, I lose interest quickly. These costs can be cash expenses, so I do not ignore them and prefer to stick with the GAAP disclosures.

Will this company be around in 10 years?

If technology changes, Qorvo has a tremendous number of assets that will need to change. In its quarterly report for the period ending Dec. 31, 2016, the company stated it had spent $387 million in the past nine months on the purchase of property and equipment.

It is difficult to predict how much it will have to spend to keep up with the needs of the industry. Whatever it needs to spend may require the company to borrow money. In November 2015, the company took out two loans in the form of long-term bonds. The table below shows the duration and interest rates of the notes. These interest payments are an additional drag on the company's profitability.

I simply cannot predict whether this company will be able to keep up under the financial burden of the cost of operating its business and the lack of strong pricing power with its customers.

When I look at Qorvo's history and what appears to be a collection of expensive manufacturing operations, my inclination is to avoid the stock. Combine that with consistently weak gross margins and a complex story to translate GAAP to non-GAAP earnings, and the decision to look elsewhere becomes quite easy.

Qorvo's Big Problem: Relying Too Much on a Few Customers