Please ensure Javascript is enabled for purposes of website accessibility
Log In Help Join The Motley Fool
Free Article Join Over 1 Million Premium Members And Get More In-Depth Stock Guidance and Research
By Billy Duberstein - Apr 19, 2017 at 4:34AM

The movie theater business faces challenges, but AMC Entertainment is responding with big moves. Here's what investors need to know.

Movie theater company AMC Entertainment Holdings, Inc. (AMC -0.15%) had quite a busy 2016. The company is majority-owned by Chinese conglomerate Dalian Wanda, which is looking to expand its vast global media empire, and it's had to make big moves in the face of the rising popularity of streaming services.

The company's busy year began with the hiring of Adam Aron as CEO in January 2016. Aron's past positions included CEO of Starwood Hotels, senior operating partner at Apollo Management (which used to own AMC), co-owner and CEO of the Philadelphia 76ers, CEO of  Vail Resorts, and CEO of Norwegian Cruise Line.

After Aron became AMC's CEO, the company engaged in a flurry of acquisitions and upgrades. Here's a look at four things investors need to know. 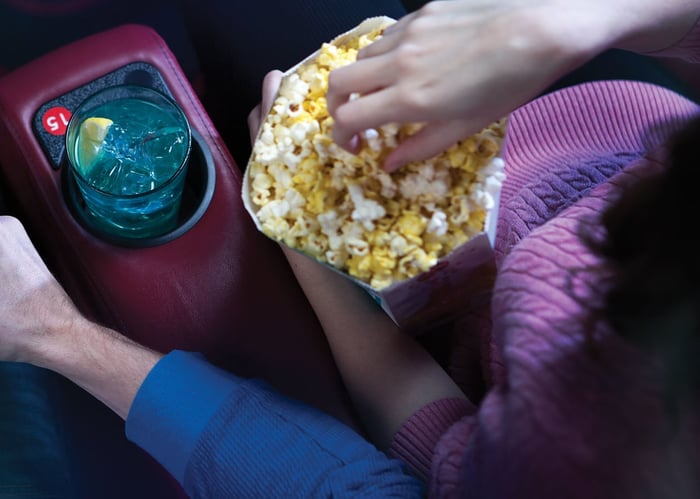 AMC's getting (much) bigger

Post-acquisitions, the company is now  the largest theater company in the world, with 1,000 theaters and 11,000 screens in 15 countries. In February, the company issued $620 million in stock to help pay off some indebtedness from the acquisitions. The company is banking on consolidation helping to drive cost synergies, boost margins, and enable value-enhancing capital expenditures where needed.

It's going to spend money to make money

Aron spent a lot of time on the Feb. 28 conference call (transcript via Seeking Alpha) touting AMC innovations -- namely, recliners. For those of you who haven't experienced a movie in a big, comfy, recliner with your feet up, it is quite a pleasurable experience, though you may not make it through without falling asleep. In 2016, the company increased its recliner footprint from 1,235 to 1,918 screens, from 23% of legacy AMC theaters to 35%.

Why is this important? Because recliners earn a 25% un-levered cash-on-cash return for AMC. That means if the company spends $100 adding recliners to a theater, revenue at that theater goes up at least $25 per year, for a brief four-year payback. In 2017, AMC plans to invest another $700 million to $750 million in capital expenditures (with landlords contributing $150 million to $170 million of that), with a majority of that going to recliners, a big increase over the $421 million spent in 2016. The company is planning to add recliner seating at 1,560 screens over the next two years, which would almost double the current total.

The company is also upgrading its food offerings, increasing popcorn flavors from one flavor to four, hot dog options from one to five, and adding stone-fired pizzas. The company did not reveal the new flavors of popcorn or the hot dog options. AMC also rolled out its Coca-Cola Freestyle service at all locations, offering 100 sodas flavors and free refills, and will be putting Freestyle in all Carmike Theaters. The company also boosted theaters that serve alcohol 89% to 244, with plans to roll out at least another 44 this year.

So, put your feet up, have a drink, eat five types of hot dogs, and watch a movie -- AMC is on a mission to create the most decadent experience around.

The CEO is invested alongside you

Aron made it clear that he is very confident about AMC's future, buying 1 million shares in the February offering on top of two other buys during 2016. Aron brought this up unsolicited on the conference call, colorfully saying, "My belief in the future prospects for AMC extends all the way to my right back pants pocket, where I keep my wallet." Aron now owns over 80,000 shares outstanding, or almost $2.5 million in stock.

Shortened VOD window could be an upside

As I noted in a previous article, studios are reportedly looking to shorten the window between theater releases and availability for video-on-demand. This is a potential threat to the theater business, as the quality of the home streaming experience is increasing, though theaters would likely get a royalty fee from new VOD sales.

... the reason we're intrigued by all this is if this is done right and this is done intelligently and our revenue share is significant enough, we believe that we have the opportunity to grow and increase AMC revenues as a result of this activity.

And others have portrayed this as a big risk or grave risk. And we think just the opposite. If we do this right, this is a chance to expand the reach of the domestic box office ... And we could get paid handsomely in the process. Such that we would enjoy a revenue stream if somebody watches a movie in our theater or if they watch at home..

I would not be so sanguine, especially since the agreements are being hashed out among several players. That being said, AMC is now the largest theater chain in the world thanks to the recent acquisitions, which should give it considerable sway in negotiations.