Most people reasonably think of Altria Group (MO 1.32%) for its Marlboro brand of cigarettes, which has gained worldwide renown and is a marketing colossus. Yet what many people don't know about Altria is that it owns a wine business, Ste. Michelle Wine Estates. Although Ste. Michelle is quite small compared to its tobacco operations, Altria still sees substantial sales and profit from the unit, and it provides useful diversification. Below, you'll find five things you should know about Altria's wine business.

1. What is Ste. Michelle Wine Estates? 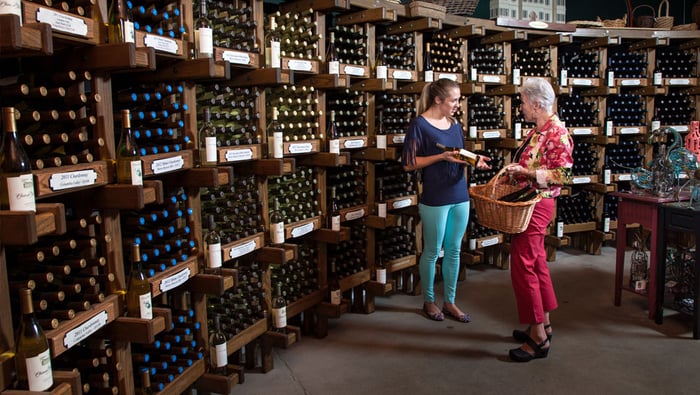 Ste. Michelle Wine Estates also has partnerships with partners in the U.S. and internationally. With exposure to wineries in Spain, New Zealand, Chile, and numerous other wine-growing regions of the world, Altria's wine unit has a commanding view of the industry.

2. How did Altria come to own Ste. Michelle?

Ste. Michelle became part of Altria when the tobacco company bought smokeless tobacco company UST in 2008. Overall, the deal cost Altria $11.7 billion, but the acquisition allowed Altria to expand beyond cigarettes, adding the key Copenhagen and Skoal brands to the company's portfolio.

In many ways, Ste. Michelle seemed like an afterthought during the transaction. Altria's statements about the offer focused on the impact of the acquisition in complementing its tobacco offerings, and only brief mentions were made about the wine business. Yet the fact that Altria has held onto the business is a sign of its value to the tobacco giant.

3. What relationship does Altria have with Ste. Michelle?

There's always concern among customers that when a major corporation takes over a smaller business, quality will be a casualty. Some wine connoisseurs are far from pleased with Altria's ownership of Ste. Michelle, but the tobacco giant has largely taken a hands-off approach toward the wine unit.

4. How successful is Ste. Michelle?

Ste. Michelle is among the top 10 producers of premium wines in the U.S. currently. Brands like Columbia Crest and 14 Hands have joined Chateau Ste. Michelle in gaining acclaim, and a host of other properties appeal to wine connoisseurs both in the U.S. and around the world.

From a business perspective, Ste. Michelle is profitable and has produced significant growth. With $721 million in sales in 2016, the wine business makes up less than 4% of Altria's overall revenue. But pre-tax profit of $164 million gives Ste. Michelle an operating margin above 20%, and the unit's profits have nearly doubled over the past five years.

5. What's ahead for Ste. Michelle?

Altria doesn't talk a lot about Ste. Michelle in its earnings calls, preferring to leave the company as independent as possible. But the company is proud about its success with wines, noting in a recent discussion with analysts that the winery had received more than 260 ratings of 90 or better for the second consecutive year.

Altria doesn't get a huge amount of money from its wine business, but Ste. Michelle Wine Estates is a valuable asset in its arsenal. With Chateau Ste. Michelle celebrating its 50th anniversary in 2017, investors should keep an eye on Altria's wine business to see how it will affect the tobacco giant going forward.