The road in Europe is likely to get bumpy for Ford's bottom line, but the company's sales results were very strong in March.

"March was a stand-out month, with progress across the board," said Roelant de Waard, vice president of marketing, sales, and service at Ford of Europe, in a press release. "Significantly, Ford outpaced the market in the UK and Germany. Our SUVs and commercial vehicles continue to be popular choices for consumers and fleets respectively, and Fiesta is again our best-selling vehicle, growing 12 percent to 47,000 sales."

Here are some of the highlights and driving forces behind Ford's strong month of March.

Ford sold 199,900 vehicles in March in its traditional 20 Western and Central European markets (Euro 20), which was an impressive 14.3% gain over the prior year. That outpaced the industry's 10.8% gain in the same 20 markets. Detroit's second-largest automaker managed to grow its passenger-car market share by 40 basis points, to 8.3%, which was enough to offset a slight dip in commercial-vehicle market share and bring Ford's total vehicle market share up to 9.2%. In its Euro 50 market, which includes the markets above plus countries in Eastern Europe, as well as Russia and Turkey, Ford sold 215,900 total units, which was a healthy 13% gain over the prior year. 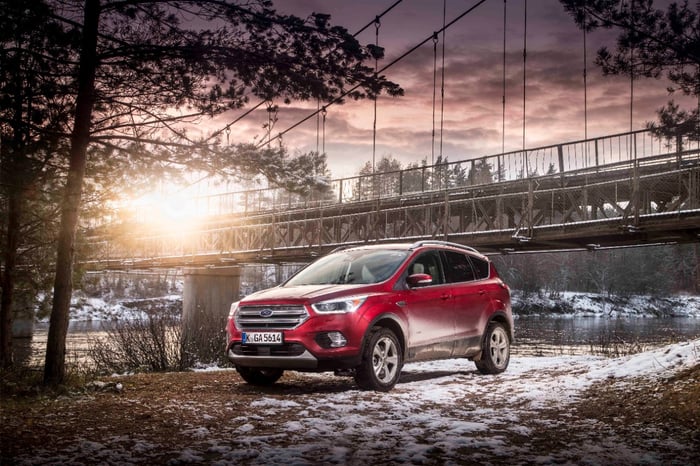 While passenger cars still make up the majority of Ford's total sales in Europe, SUVs are gaining traction with consumers. Ford's SUV sales were up 53% to 32,000 in the Euro 20 last month, thanks to increasing demand for the Kuga (Escape), EcoSport, and Edge. Kuga sales jumped 45% in March, to 21,100 units, which is the vehicle's best March since its launch way back in 2008. The EcoSport is also selling well, with a similar 46% gain in March, to 9,200 units, also its best March since its 2014 launch.

Switching gears to trucks, Ford's Ranger kicked off 2017 with a 28% sales gain during the first quarter, compared to the prior year, which is the best start to the year for the Ranger since it launched in1999. Despite the success, its sales volume is still far behind that of the SUVs, with only 10,400 units sold during the first three months.

Premium trims on the rise

Ford's ability to generate more revenue and healthier margins in Europe is based on different factors from the ones at play in the U.S. market. Here in the States, full-size trucks, SUVs, and luxury vehicles haul in the big bucks. Unfortunately for Ford, it doesn't sell its Lincoln luxury brand in Europe, nor does it sell full-size trucks.

That's one reason the automaker has focused on high-end trims including Titanium, Vignale, ST-Line, ST, and RS, which help drive prices higher. Those high-end trims make up 68% of Ford's passenger vehicle sales in the Euro 20, which is a 400-basis-point gain from the prior year. Ford's performance cars -- Fiesta and Focus ST, Focus RS, Mustang, and GT -- also had a solid March, recording a 26% increase in sales in the Euro 20, albeit at a volume of only 7,900 units.

March puts the finishing touches on the first quarter, and with Ford's sales up 9.4%, the stage is set for a solid result for the top and bottom lines. However, Ford's hedges for a weaker British pound due to Brexit are going to expire during the first half of 2017, and management believes Ford's pre-tax profit could take a hit of about $600 million this year when it's all said and done. Investors should enjoy Ford's success in Europe this quarter, because the ride could get bumpy throughout 2017.