Here's a brief guide to the numbers you should check on next week, when the mobile-payments vendor releases first-quarter 2017 earnings.

PayPal Holdings Inc. (PYPL 4.08%) reports first-quarter 2017 earnings next Wednesday, after the markets close. The company enjoyed a robust 2016, with revenue growth of 17%, and it's signaling sustained momentum for 2017. Management has projected revenue growth of 14% to 16% in the first quarter, implying a top line of between $2.90 billion and $2.95 billion. PayPal is expecting diluted earnings per share of $0.31 to $0.33, a modest improvement over the $0.30 per diluted share earned in the first quarter of 2016.

Beyond the headline numbers, investors should pay attention to a handful of metrics specific to PayPal's health as a payments processor. The following is a brief guide to pertinent first-quarter metrics, as well as two other themes to track next week. 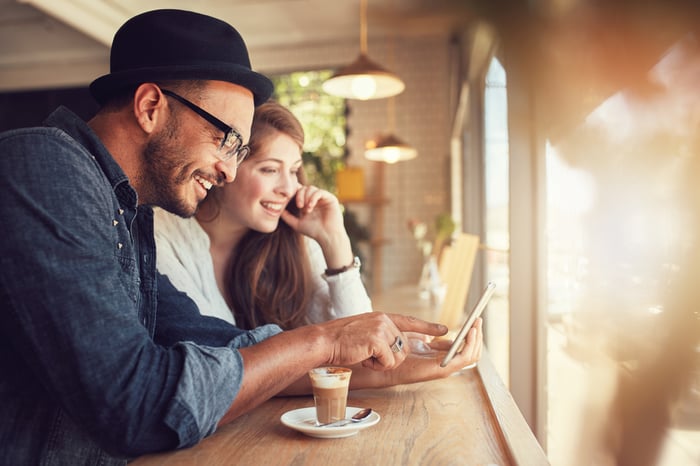 To get to the 14% to 16% revenue improvement sketched out above, PayPal will need to show continued substantial growth in total payment volume (TPV), which measures the aggregate dollar amount processed through the organization's payments platform.

The change in TPV is the first number many investors seek out when evaluating a payment company's results. Last year, PayPal increased TPV by 26%, and a full-year revenue target of 15% to 17% implies a similar, or perhaps slightly slower, TPV growth rate for both this quarter and the full year.

PayPal's "take" (revenue) from each transaction completed over its platform has been diminishing over the last several quarters. Since the third quarter of 2015, PayPal's transaction take rate has declined from 2.84% to 2.63%, which is one of the primary factors driving overall transaction margin down nearly five percentage points during the last six quarters, to 57.7% as of fourth-quarter 2016.

PayPal's take rate has decreased as its Braintree subsidiary has enjoyed a boost in transaction volume. Braintree carries a higher transaction expense than the overall company, yet it's scaled rapidly since PayPal acquired it in late 2013, participating in the growth of client merchants like Pinterest and Airbnb.

The hypergrowth of PayPal's social payments app Venmo has also contributed to a lower overall take rate. Venmo posted TPV of $5.6 billion last quarter, but only a very small portion of this volume was monetized. Management has indicated that Venmo will significantly increase its transaction revenue over the next three years, as new payment features are rolled out.

Over the last two quarters, PayPal's decline in take rate appears to be moderating. Look for a stabilization in Q1 2017 near the current level of 2.63%, or perhaps even a slight uptick in take rate either this or next quarter.

In addition to checking on the numbers we've covered above, investors will be eager to receive more detail from management on two recent themes in PayPal's business: its partnerships, and merger and acquisition activity.

In the past year, PayPal has executed a strategy of forming alliances with potential rivals in the payments space. In a prominent example, last year the company announced a tie-up in the U.S. with card issuer Visa (V 0.86%). Earlier this month, the two parties revealed that they've extended the arrangement to the Asia Pacific region. The deal expansion means that banks in the region that issue Visa cards can allow their cardholders to check out online wherever PayPal is accepted. Brick-and-mortar retailers honoring the Visa symbol will now also be able to accept PayPal as payment.

Essentially, the two transaction titans will leverage their complementary strengths and networks to capture greater payments share in one of the world's most vibrant emerging markets. Management should provide more detail on the partnership enhancement during its earnings conference call on April 26.

The purchase is slated to close later this year. It's the type of bolt-on acquisition that's well-suited for PayPal, which can easily ramp up TIO's payments volume by integrating the Canadian company's services into its own platform. Even better, PayPal will use just a smidgen of its nearly $5.0 billion cash and investments balance to complete the transaction.

We can expect to hear more information on this deal on the upcoming earnings call. The conversation may also address how PayPal intends to put its cash hoard to work on similar deals which will bolster TPV -- and thus revenue -- in the near future.