China represents a third of all jewelry sales. Which Western brand is doing the best job of cracking the all-important Middle Kingdom?

China is becoming more important for Western jewelry brands. With over a billion people and a growing middle class, China is the world's largest jewelry market, at an estimated $103 billion, representing one third of global jewelry sales, and is growing quickly. The Chinese market is estimated to grow 7% through 2020, compared with only 3% for North America and 1% for Europe.

Three Western brands -- Tiffany, (TIF); Cartier, which is part of Richemont (CFRH.F -15.11%); and Pandora A/S (NASDAQOTH: PANDY) , are all looking east for growth, and going about it in different ways. Let's dig in. 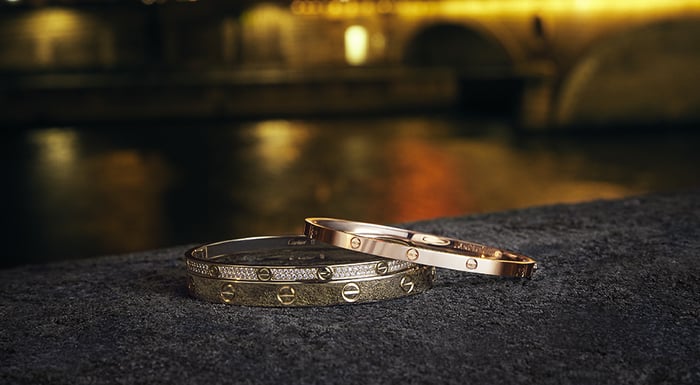 Cartier is part of Richemont's "jewelry houses" segment, which also includes Van Cleef & Arpels and Giampiero Bodino. Jewelry houses are Richemont's largest segment, at 55% of sales. Moreover, its non-watch jewelry segment was the highest-growth category for the company.  .

In its 2016 annual report, Richemont's management highlighted China as a key growth market, up 26% year over year, which offset weakness in Hong Kong and Macau. Chinese and Hong Kong sales made up 22% of Richemont's revenue last year. .

Cartier is making a significant move by putting a virtual storefront on China's WeChat. While it might seem odd for a luxury brand to put a storefront on a messaging app, L2 research recently called WeChat, owned by Chinese internet giant Tencent (NASDAQOTH: TCEHY), "the most important platform for luxury brands" in China today, as reported by the Financial Times. While the service is a mere 5 years old, WeChat boasts 850 million monthly active users. Many of the local jewelry players, such as Chow Tai Fook, already have storefronts on the site.

Tiffany is currently struggling with worldwide sales, though it still points to China as an engine of growth. While its Asia-Pacific region reported a slight decline in 2016, this was due mainly to declines in Hong Kong, Macau, Taiwan, and Australia. CEO Michael Kowalski said on the recent Q4 conference call, "We certainly see ... Mainland China opportunity as continuing to be very, very significant. Again, the brand is still in its early -- relatively early stages of development in that market." Tiffany opened three stores in China in 2016, but closed two others, taking its total to 31. China represents roughly 13% of total Tiffany sales.

While Tiffany uses WeChat for marketing, it has not embraced a WeChat storefront yet, as Cartier has. This may be due to a desire to preserve the exclusive appeal of Tiffany's store experience. Chinese fashion blogger Hazel Meng was quoted by the Financial Times as saying this is a mistake. She pointed to simple, silver Tiffany bracelets as an example that could succeed on a digital store as many young Chinese are looking toward Western brands with "a little heritage" and buying online is preferred.

Brands that are reluctant to embrace e-commerce and meet customers where they want to shop could be putting themselves at risk. Tiffany investors should monitor the company's China digital strategy going forward.

One brand that does things differently is Pandora A/S, which makes those trendy, silver charm bracelets. Pandora entered China in 2011 and already has over 100 stores there. Last fall, Pandora opened its e-commerce site in China, as well as its own storefront on Tmall, a WeChat rival. While Pandora aims its marketing at middle-age women in the U.S., it has gone after the 25-35-year-old demographic in China by partnering with celebrities such as actress Ivy Chen.

"The launch of PANDORA jewellery on Tmall.com is another important step in establishing the PANDORA brand amongst Chinese consumers. Tmall is a clear leader in China's internet retail space, and is the right business partner for PANDORA to get the broadest approach to the Chinese consumer," Kenneth Madsen, president, Pandora Asia Pacific, was quoted as saying in an October 2016 press release. Chinese sales increased 175% in 2016, with same-store sales in the fourth quarter of 44%.

Despite China representing one-third of the global jewelry market, it is still only 4%-5% of Pandora sales, which means there seems to be a long way to go for Pandora in China.

How are they doing?

Which of these brands are doing China right? For me, the clear winner is Pandora, due to its incredible growth, though this could be because it appeals to a different mass-market segment.

Second place is Cartier, showing the second-best Chinese growth of the three, and boldly moving forward with its WeChat storefront.

Tiffany is last, but not out. Should the company choose to be less guarded about its brand and embrace e-commerce to a greater extent, its prospects in China may catch up with the others.