Please ensure Javascript is enabled for purposes of website accessibility
Log In Help Join The Motley Fool
Free Article Join Over 1 Million Premium Members And Get More In-Depth Stock Guidance and Research
By Rick Munarriz - Apr 20, 2017 at 10:09AM

Two of the top dogs in fast-casual dining report earnings next week, but they're moving in different directions.

There was a time when Chipotle Mexican Grill (CMG 1.70%) and Panera Bread (PNRA) were the market darlings of fast casual, offering the quality of table service eats with the convenience of fast food. It's a different world these days. Chipotle is trying to claw its way back from the bouts of food-borne illnesses that scared away customers. Panera's upside -- and seemingly its downside -- is now capped by a pending acquisition.

Let's start with Panera, since its story is easier to sum up. JAB announced that it would be acquiring Panera in a $7.5 billion deal earlier this month. The deal cashes out Panera investors at $315 a share, a 15% premium to where it was when the transaction was announced but now a mere $0.02 of upside off of Wednesday's close.

There's always the potential for a rival bidder to step up, possibly why the stock is trading so near -- and on Tuesday's close above -- the buyout price. The deal can also come undone, posing some near-term downside but long-term upside. However, the more likely scenario is that Panera bows out as a public company, just as other recent JAB targets including Keurig Green Mountain and Krispy Kreme have done. 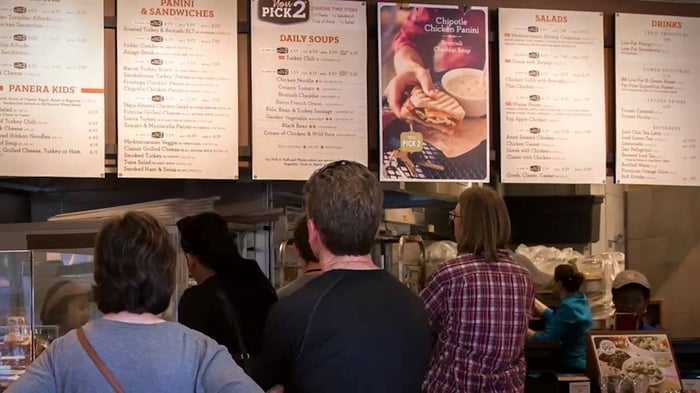 The long road back for Chipotle

There's no near-term exit strategy for Chipotle. It's going to have to earn its way back to its all-time highs set in the fall of 2015, just before patrons were presented with reasons to distrust the Chipotle experience.

Chipotle is on the way back. Comps turned positive for the month of December, though it still rattled off its fifth consecutive quarter of declining same-restaurant sales. The positive comps should continue through 2017, but it will take substantial improvement to get things back to where they were when Chipotle's store-level fundamentals peaked in 2015.

The worst is clearly behind Chipotle. It's now a year removed from its first and only quarterly deficit as a public company. A new marketing campaign and an expanded menu are wooing back diners. The lines seem longer again these days, and next week we'll find out if reality matches the anecdotal.

Both Panera and Chipotle will be reporting quarterly results next week. The numbers may not be so important for Panera. JAB didn't let any hiccups in operations at Keurig or Krispy Kreme get in the way of those purchases. The market will naturally be more interested in what Chipotle has to say.

Deciding if Chipotle is a better buy than Panera at nearly $315 right now is essentially asking if Chipotle will squeeze out a positive stock gain from current levels. The near-term outlook is encouraging. Whether it's the addition of chorizo as a protein or the new advertising approach or just time healing wounds, Chipotle is making the right moves -- making it the better buy right now.