"Fate of the Furious" delivered an explosive global opening, and it's on track to deliver the best box office run of any film in the hugely successful series.

Comcast's (CMCSA 1.18%) Fate of the Furious is already a record-breaker and is on its way to becoming one of the fastest movies to pass $1 billion in global ticket sales. The picture delivered the best-ever global opening, bringing in $532 million in its first weekend and unseating Disney's Star Wars Episode VII: The Force Awakens to claim the biggest debut ever.

Fate's success proves that the franchise still has momentum, and it solidifies the property as one of the world's most valuable in entertainment. It's another big win for Comcast's Universal Pictures, which has been building momentum with a slate of rising franchises and by strengthening its position in content. 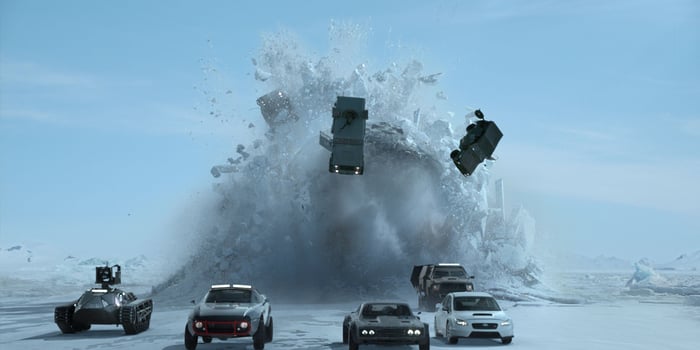 2015's Furious 7 was a huge hit and went on to gross more than $1.5 billion in global ticket sales, so a massive performance for its sequel isn't exactly shocking, but the franchise's overall trajectory is one of the biggest comeback stories in Hollywood. After disappointing results for the series' third entry, Fast and the Furious: Tokyo Drift, it looked as if the franchise could have been placed on hold, but the property was given a soft reboot with its fourth entry in 2009, and it's been picking up speed ever since. Fate of the Furious is a lock to pass the billion-dollar sales mark and seems to be in good shape to top Furious 7's hugely successful run.

The franchise's most recent installment managed to deliver a record opening weekend performance despite a substantial drop-off in domestic ticket sales. Furious 7 posted a $147 million opening, while sales for the recently launched Fate came in at $98 million -- representing a roughly 33% decline between releases. That kind of development would normally be a worrying sign for a franchise, but Comcast and Universal probably aren't sweating the decline too much.

Fate of the Furious opened to a record $192 million opening weekend in China, and it also set new opening-weekend records in 18 other countries and delivered Universal's best-ever opening in a total of 27 territories. The record-setting international performance offsetting domestic sales decline points to the increasing importance of the overseas market. While domestic ticket sales have posted only modest growth over the past decade, the international box office is growing at a rapid clip -- leading studios to reshape their strategies to better serve a global audience. The Chinese market in particular is exploding and is expected to overtake America as the world's biggest film market within the next two years, and Comcast can probably count on huge sales in the region for the Furious sequels it has planned for release in 2019 and 2021. 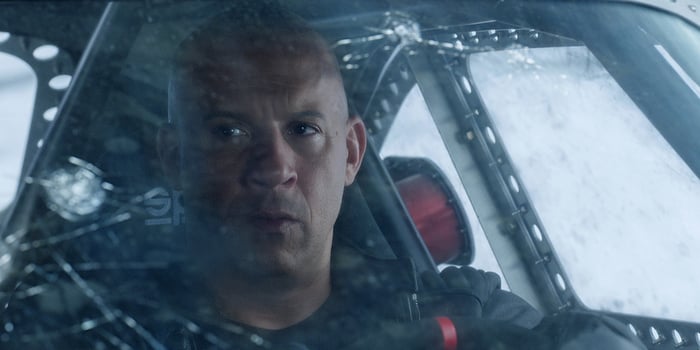 Comcast has also been racking up movie wins outside the Furious franchise, and its expanding stable of viable entertainment properties points to strong box office performance down the line. 2015 saw the company set a record for annual worldwide ticket sales thanks to the strength of products including Furious 7, Jurassic World, and Minions, and while last year's filmed entertainment sales dipped nearly 13% year over year, and operating cash flow for the segment fell roughly 44%, the decline was more indicative of unfavorable release slate comparison than a sign that its movie business is weakening.

A declining contribution from its filmed-entertainment segment weighed on Comcast's sales and earnings growth last year, but the company's 2016 movie happenings laid the foundations for big things to come. Universal released The Secret Life of Pets, a franchise launcher that went on to gross more than $875 million in ticket sales on a $75 million production budget -- making it one of the most profitable films ever and setting a sequel in motion for a 2019 release. The company also scored a hit with Sing, which did more than $625 million at the box office and has a sequel set to bow in 2020. Add in the acquisition of DreamWorks Animation and associated properties including Shrek and How to Train Your Dragon, and 2016 was a great year for Comcast's movie business.

With Fate of the Furious burning rubber at cinemas around the globe, Despicable Me 3 likely to pass the billion-dollar ticket sales mark after it releases this June, and other potential winners in The Mummy and Pitch Perfect 3, Comcast's film wing will probably deliver an improved material contribution in 2017. The company is now on its way to a third consecutive year of big success at the movies, and its potent lineup of franchises combined with an expanding international audience and growth in digital distribution pave the way for continued film-segment momentum.