Canada is on track to legalize recreational marijuana. Could U.S. marijuana stocks benefit at all?

The maple leaf could soon be joined by a marijuana leaf. 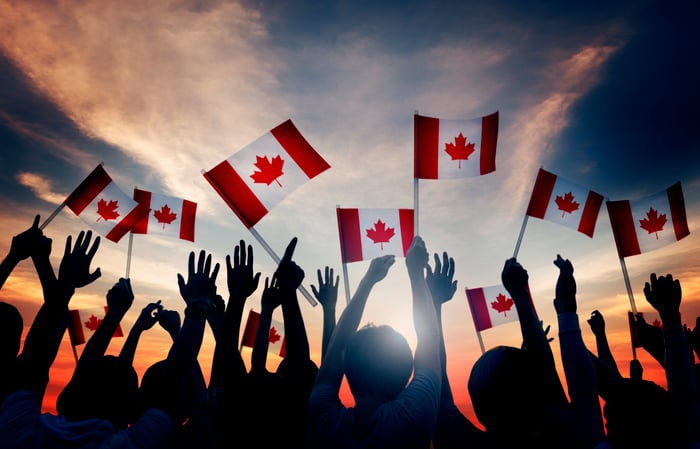 There don't appear to be any direct benefits from Canadian legalization of marijuana for U.S. companies in the marijuana business. The bill unveiled by Prime Minister Trudeau doesn't allow importing of marijuana without a special permit. Also, any company selling recreational marijuana must be licensed similarly to how medical marijuana growers in country are currently licensed.

That means companies such as Canopy Growth Corporation (CGC 6.16%) should be in the driver's seat. Canopy Growth is already one of a relatively small group of companies licensed to sell medical marijuana in Canada. Its stock has soared in recent months as investors anticipate the company's expansion into the recreational marijuana market, pending legalization in Canada.

It's possible that a U.S. company could acquire a Canadian operation that obtains a license, though. The current licensing requirements for medical marijuana state that corporations that either have a "head office or a branch office in Canada" can become a licensed provider.

The largest U.S. marijuana company (that isn't a biotech) in terms of market cap is Medical Marijuana, Inc. (MJNA). The company already operates in Brazil and has plans to expand into Spain, Mexico, the Dominican Republic, and the U.K. However, expanding into Canada hasn't been a stated goal for Medical Marijuana -- at least not yet.

Although U.S. stocks won't benefit directly from Canadian legalization of recreational marijuana, it's possible that they could see indirect benefits over the long run. How? The most likely way is through strengthening support for marijuana legalization in the U.S.

A Pew Research Center survey conducted in August and September of 2016 found a huge shift in support for marijuana legalization among Americans. Ten years ago, only 32% of Americans favored legalization. Now, 57% support legalization of marijuana.

Those results were similar to findings from Gallup. A 2016 Gallup survey found that 60% of Americans thought marijuana should be legalized. In 2005, only 35% of American adults polled by Gallup supported marijuana legalization.

Public support has resulted in a growing number of states legalizing medical marijuana and some allowing recreational marijuana use. However, this has not yet led to changing federal marijuana laws. Canadian legalization of marijuana could further bolster American support for legalization, especially if the people of Canada experience more benefits than drawbacks in the years following the bill's adoption.

Sooner or later, politicians in Washington seem likely to yield to the will of their constituents. The more the public supports marijuana legalization in the U.S., the easier it will be for the U.S. Congress to make changes without fear of political repercussions.

Canadian marijuana stocks will probably outperform their peers in the U.S. in the near term. The stock performances of Canada-based Canopy Growth and U.S.-based Medical Marijuana are similar over the last 12 months. However, Canopy Growth's share price is up so far in 2017, while Medical Marijuana's stock price is down more than 30% year to date.

The difference comes down to expectations. Canadians expect legalization of recreational marijuana will be just around the corner. Americans don't know what to expect: Legalization is seeing increasing support in the states, but the U.S. attorney general is an avowed opponent.

Over the long run, Canadian legalization of marijuana could be a good thing for American marijuana stocks. For now, though, it's highly uncertain whether the U.S. government will turn a new leaf in its views on marijuana.