Panera Bread (NASDAQ:PNRA) has become the latest brand to be purchased by JAB Holdings, a privately held company that has quietly bought up an impressive line of businesses in or adjacent to the coffee space.

In addition to agreeing to pay $7 billion for Panera, which has over 2,000 locations and about $5 billion in annual sales, JAB also owns such iconic names as Krispy Kreme and Keurig. In addition, the company has a controlling stake in Peet's Coffee & Tea, Caribou Coffee Company, Einstein Bros. Bagels, and Jacobs Douwe Egberts, a major global player that itself has cafes. JAB also owns Stumptown Coffee Roasters, Senseo, Tassimo, Gevalia, and a number of other global coffee brands.

It's an impressive lineup that gives the company a piece of the coffeehouse/cafe market in the United States, along with a large chunk of the in-home coffee market, mostly due to Keurig. The moves certainly all seem related, making it appear as though JAB plans to leverage all the assets it has acquired into building a rival to Starbucks (NASDAQ:SBUX), both domestically and internationally.

JAB, however, has kept each company's management in place and has done little, if anything, to push its brands to work together. The parent company has the pieces to be a formidable Starbucks rival, but it has chosen not to do that. 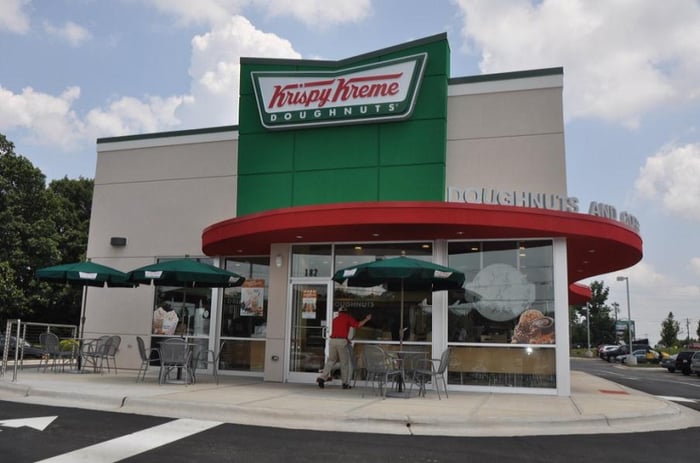 JAB owns Krispy Kreme along with a slew of other coffee brands. Image source: Krispy Kreme.

What is JAB doing?

Thus far, JAB has allowed each of its acquired coffee brands to operate independently. In fact, with each major purchase, the parent company has not only kept existing management on board but has allowed the brand to keep its headquarters wherever it has been. And while a number of JAB's brands already had partnership deals with Keurig, the company has not made a significant effort to integrate its holdings.

"JAB's investment philosophy with companies it acquires is they operate independently and continue to be managed by their management," JAB spokesman Tom Johnson told USA Today. "There's no plan to integrate with other assets in the portfolio."

JAB has launched a concept called "Coffee & Bagels," which essentially co-locates a Caribou Coffee and an Einstein Bros. under the same roof. It's a smart idea, but the 13-store chain is more of a joint venture between the two brands than an attempt to integrate JAB's holdings.

When going up against a rival with that much market share, JAB would be smart to keep its plans close to the vest. It has quite a few pieces in the coffee space, but all are relatively small compared to Starbucks. Keurig, for example, had sales of $4.5 billion in 2015, the last full year in which it reported before being bought. That's fairly similar to Panera's annual sales and the $5 billion Jacobs Douwe Egberts claimed when JAB took control of its brands.

As a whole, JAB approaches or perhaps even surpasses Starbucks' annual sales (as a private company, it does not have to report numbers). Those sales, however, come from an array of assets that give the holding entity a beachhead in a lot of markets but near dominance only in the U.S. single-serve space.

Panera, which will keep its current management in place after the deal closes, has a stronger lunch business than Starbucks, but its coffee offering is surprisingly weak. The company does sell some espresso-based drinks and a selection of frozen coffee-based beverages, but its coffee doesn't seem to be a major focus. The JAB purchase could change that by the simple addition of a Peet's, Caribou, or even Krispy Kreme-branded coffee counter to its stores.

That's exactly what Jeffrey Young, managing director of coffee consulting firm Allegra Strategies, told Bloomberg he expects to happen. He called Panera a "huge account to sell to internally." That's not how JAB has operated to date, but it's possible that Panera CEO Ron Shaich would see the value of doing just that. Shaich might also consider making deals with some of Panera's new sister companies to carry a selection of the items it makes in their bakery/cafes.

JAB has been in acquisition mode, and once the Panera deal closes, it may move to leverage its holdings a little more. That does not have to mean forcing its companies to work together or do things they otherwise would not. Instead, the company could challenge Starbucks by creating avenues for brands like Panera to hook up with others within the family.