Billions of dollars in sales -- and profits -- are about to begin flowing to LockMart.

Two years ago, Lockheed Martin (LMT -4.61%) agreed to lay out $9 billion to buy Sikorsky Aircraft from its then-owner United Technologies (RTX -4.79%). The deal's price tag may have sounded steep at the time -- but it's continuing to pay off for Lockheed Martin.

Case in point? For years prior to its sale to Lockheed, Sikorsky had been developing a new heavy-lift helicopter to serve in the U.S. Marine Corps and replace the Corps' aging fleet of CH-53E Super Stallions. Now all that work has resulted in new owner Lockheed inheriting a production contract for the new "King Stallion." 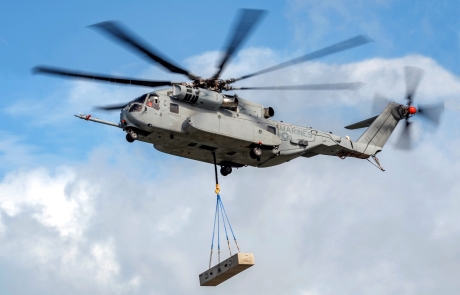 That's great news for the Marine Corps, which will get a new heavy-lift helicopter capable of carrying three times the weight that the helo it is replacing could. Indeed, Lockheed Martin calls the King Stallion "the most powerful helicopter our nation has ever designed," capable of carrying an armored personnel carrier in its capacious hold.

Six King Stallions are already under contract and due for delivery next year. Two additional aircraft are part of the first "LRIP." Ultimately, the Corps expects to order 200 of these helicopters through 2029, which will be enough to form 10 active-duty, training, or reserve squadrons. Additionally, Lockheed hopes to sell the CH-53K internationally -- Germany, for example, has expressed an interest in buying as many as two full squadrons of King Stallions for its military.

What it means for taxpayers

Now, the Pentagon has budgeted closer to a $96 million flyaway cost for future CH-53K purchases, anticipating more affordable prices as production ramps up and efficiencies of scale kick in. Still, if you add in research and deveopment costs incurred in developing the helicopter ($34.5 million in R&D costs per aircraft, amortized across the fleet), the CH-53K's all-in cost quickly approaches $130.5 million -- which surpasses Lockheed's quoted prices on its most expensive F-35 variant, the F-35B (which, coincidentally, is also headed for the Marines).

Investors might prefer to look at things a bit differently. Here, we want to keep our eye on the program cost as a whole and not just the unit cost of the aircraft. According to DefenseNews.com, outfitting the USMC with a fleet of 200 fully functional CH-53K King Stallion helicopters will cost $26.1 billion -- $6.9 billion in R&D costs to develop the aircraft, plus $19.2 billion in procurement costs (plus, potentially, even more procurement dollars from foreign buyers).

At the 5.9% operating profit margin that S&P Global Market Intelligence quotes for Lockheed Martin's Rotary and Mission Systems division, this implies that LockMart investors can anticipate their company earning $1.5 billion in profit for production of the Marines' new whirlybird -- plus maintenance and servicing profits, plus profits from selling and servicing additional King Stallions abroad.

All of which makes this kind of a big deal.