Please ensure Javascript is enabled for purposes of website accessibility
Log In Help Join The Motley Fool
Free Article Join Over 1 Million Premium Members And Get More In-Depth Stock Guidance and Research
By Adam Levine-Weinberg – Apr 23, 2017 at 9:45AM

Spirit Airlines is starting to move up the ranks in the annual Airline Quality Rating study.

The annual Airline Quality Rating report began including Spirit Airlines (SAVE -0.28%) in 2015. To nobody's surprise, the ultra-low-cost carrier brought up the rear, trailing even fellow ULCC Frontier Airlines by a significant margin. After all, for many years, management's attitude was that Spirit didn't need to provide good service -- ridiculously low fares would be enough to attract customers.

However, in early 2016 Spirit Airlines got a new CEO, Bob Fornaro. Shortly after he took the top job, Fornaro made it clear that one of his priorities as CEO would be to improve Spirit's customer service. It's still early, but it looks like Spirit's efforts to become a kinder, gentler version of itself are working. Indeed, when the Airline Quality Rating report covering 2016 came out earlier this month, Spirit Airlines had already moved out of the bottom spot. Furthermore, it's in good position to keep moving up the rankings in 2017.

In 2015, Spirit Airlines actually scored better than average in terms of mishandled baggage and involuntary denied boardings. However, its on-time percentage of 69% was far below the industry average of 79.9%. Worst of all, it received 11.73 official complaints per 100,000 customers transported: more than six times the industry average.

As a result, Spirit received an overall score of -3.18, far behind top-ranked Virgin America's score of -0.40. (Numbers closer to zero are better.) Frontier was the second-worst mainline carrier, with a score of -2.60.

In 2016, Spirit's rate of involuntary denied boardings nearly doubled. However, it improved on every other metric tracked by the Airline Quality Rating study. Most notably, Spirit's complaint rate fell by almost half, to 6.74 per 100,000 passengers, helping improving its overall score to -2.01.

That was enough to leapfrog Frontier Airlines, which fell back into the last spot despite improving its own score from -2.60 to -2.24. 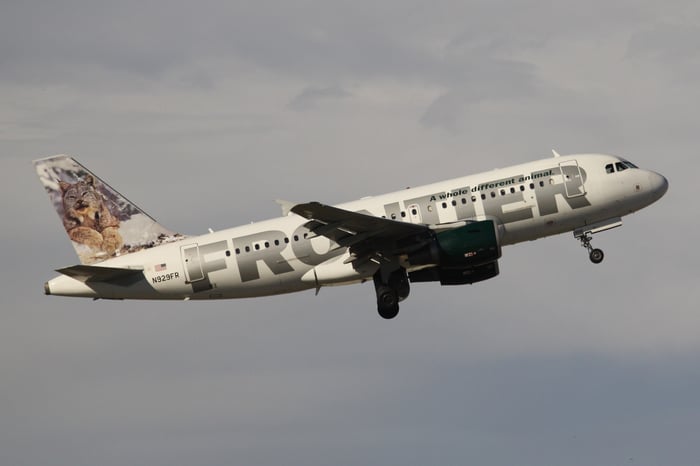 One thing that stands out from the Airline Quality Rating data is that Spirit Airlines didn't start to improve until May last year. During January and February, Spirit's scores were down significantly relative to 2015. In March and April, they were about even with the prior year.

This means that Spirit Airlines is likely to improve its score again in 2017. That could help it win customers away from the legacy carriers -- especially United Continental (UAL 1.56%), which currently faces a consumer backlash due to two highly publicized recent gaffes.

In fact, in the month of December, Spirit Airlines posted a better Airline Quality Rating score than United. The early data suggest that Spirit's momentum is continuing in 2017.

First, among the 12 airlines that report monthly statistics to the Department of Transportation, Spirit Airlines was firmly in the middle of the pack in terms of on-time performance in January and February, after being dead last in the first quarter of 2016. Second, it led the industry in baggage-handling performance in January and came in a respectable third during February. Third, while Spirit still lags the industry in terms of official complaints, it reduced the rate of complaints by more than 50% year over year in January, and by 70% in February.

That said, it wouldn't be surprising if improving customer-service metrics cause more travelers to consider flying on Spirit Airlines. After all, traditional airlines are gradually becoming more like Spirit as they remove various amenities from their cheapest tickets.

United Airlines is going further than any other traditional airline in terms of removing standard features from some tickets with its new "basic economy" fare class. Customers who buy these tickets won't be permitted to bring a full-size carry-on bag with them. Basic economy ticket holders also won't be entitled to advance seat assignments, flight changes, or upgrades.

Of course, United's management hopes that customers who see these restrictions will pay a little extra for a regular economy ticket. However, with United's reputation sagging -- while Spirit's reputation is on the rise -- it's also possible that customers will react to the new basic economy fares by opting to fly Spirit in markets where the two compete directly.

In short, a more customer-friendly Spirit Airlines shouldn't have to cut its fares quite as drastically to keep its planes full. Meanwhile, it will put more pressure on rivals like United Airlines to do better in order to justify their higher fares.