It isn’t often that Bank of America’s stock surges more than 4% in a single day.

Whether you're an active investor or not, anytime a company as big as Bank of America (BAC 1.38%) sees its stock climb 5%, as was the case at one point on Monday, it's worth investigating what caused the move.

One explanation, as my colleague Jordan Wathen offered here, is that long-term interest rates rose on Monday for the fourth day in a row. This is good news for Bank of America, because higher rates will translate into higher net interest income, and thus higher earnings. 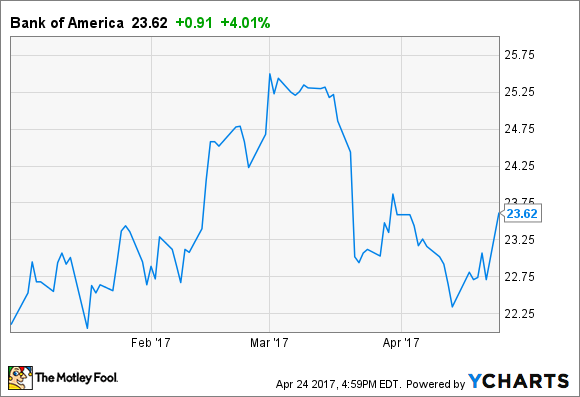 To understand why rising rates boost revenue at Bank of America, it's helpful to analogize a bank's business model to that of a retail store -- say, a bookstore. Holding all else equal, if the price of books rises, so, too, will the bookstore's revenue. The same is true for banks, only instead of selling books, they sell money by making loans, with the price reflected in the interest rate.

Some banks are more sensitive to higher rates than others, with Bank of America being especially "asset sensitive." The North Carolina-based bank's latest interest rate sensitivity analysis shows that a 100 basis point, or one percentage point, increase in short- and long-term rates would translate into $3.3 billion worth of additional net interest income.

Thus, as yields rose on Monday on 10-Year Treasury bonds, the principal long-term interest rate benchmark in the United States, it was no surprise that bank stocks responded in kind, with Bank of America leading the way. An index that tracks two dozen large-cap bank stocks was up 2% at the close of trading, while shares of Bank of America finished the day 4% higher. But while this explanation is accurate, it's also incomplete, because it glosses over the catalyst that caused long-term interest rates to climb. Namely, the results from first round of the presidential election on Sunday in France.

There was concern that a strong showing by far-right candidate Marine Le Pen would spell trouble for the European Union, as she's campaigned on an anti-NATO and anti-EU platform. It's one thing if the United Kingdom leaves, as it never fully joined, eschewing the euro in favor of the pound, but France's departure would essentially cause the union's disintegration.

That Le Pen was edged out by 39-year-old political novice Emmanuel Macron thus came as a relief to the markets, which would have abhorred the uncertainty of an otherwise seemingly doomed EU. Offering added relief was that the other leading presidential candidates then put their support in the upcoming run-off behind Macron.

To tie this back to interest rates, then, because 10-Year Treasury bonds are considered to be among the safest investments in the world, it stands to reason that when risk goes down, so too will the price of bonds. And because a bond's price is inversely correlated to its yield, this explains why the yield on 10-Year Treasury bonds climbed today, thus igniting the rally in Bank of America's stock.