The toymaker continues its strong earnings streak with adjusted EPS rising more than 13%.

Toymaker Hasbro (HAS -8.11%) delighted investors once again when it reported first-quarter 2017 earnings before the market opened on Monday. Revenue grew 2.2%, and adjusted earnings per share increased 13.2% from the year-ago period.

Results were stronger than these numbers suggest, as the first quarter of 2016 provided a tough comparable, largely because of sales of toys based on Disney's (DIS -0.15%) Star Wars: The Force Awakens, released before the 2015 holiday season. Growth in the current quarter was driven by the games category.

The market propelled Hasbro shares to a closing gain of 5.9% on Monday, as results were probably more robust than most investors had expected. Hasbro stock has returned 31.6% in 2017, through Monday, trouncing the market's 6.7% return. Shares of rival Mattel (MAT -0.69%) -- which reported disappointing first-quarter results last week -- have returned a negative-20.4% during this period.

Reported earnings include an EPS benefit of $0.11 compared with the year-ago period stemming from a new accounting rule related to employee stock shares. The adjusted earnings comparison strips this benefit out.

There are two main additional factors that affect year-over-year comparability: the differences in the length of the quarter and currency effects. The reported quarter included 14 weeks, while the year-ago period had 13 weeks. Given the timing of the week, it added another week of expense but didn't contribute a comparable level of revenue, according to Hasbro. On a positive note, revenue got a $3 million boost from the impact of favorable foreign exchange.

For some context -- though long-term investors shouldn't focus much on much Wall Street's near-term estimates – analysts were expecting adjusted EPS of $0.38 on revenue of $827.3 million, so Hasbro breezed by both estimates.

Hasbro rolled out its new categories for reporting revenue this quarter, as shown in the following chart. Previous categories were boys, girls, games, and preschool. Hasbro gaming and emerging brands were the growth drivers, showing powerful year-over-year revenue growth of 43% and 25%, respectively. 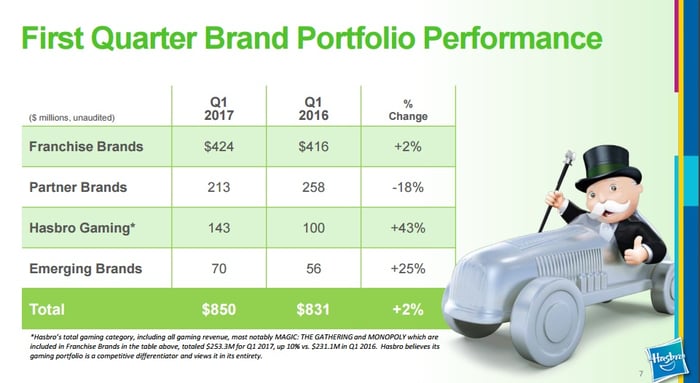 The caption in the image reads: "Hasbro's total gaming category, including all gaming revenue, most notably MAGIC: THE GATHERING and MONOPOLY which are included in Franchise Brands in the table above, totaled $253.3M for Q1 2017, up 10% vs. $231.1M in Q1 2016. Hasbro believes its gaming portfolio is a competitive differentiator and views it in its entirety." Image source: Hasbro.

Gaming showed broad-based strength across new games, classic games, and digital games. Revenue in Hasbro's total gaming category -- which includes games that are categorized in the franchise brand category -- was up 10% year over year. Growth drivers included digital gaming; several new games, including Speak Out, Toilet Trouble, and Fantastic Gymnasium; and several other games, including Dungeons & Dragons, Bop-It, and Pie Face, the latter of which is a relatively new brand.

The franchise brand category held its own, with revenue up 2% from the year-ago period, driven by Nerf, Monopoly, and Transformers. Franchise brands are Hasbro's key internal brands.

Partner brand revenue declined 18%, which wasn't unexpected. Performance in this category was better than it seems, as the year-ago period was particularly strong because of The Force Awakens toy sales. DreamWorks' Trolls and Beyblade growth helped offset declines in Star Wars and Marvel, though the latter two partner brands should get a boost from movie releases later this year.

Hasbro's segment reporting system remains the same. Revenue in the U.S. and Canada segment was up 2% year over year, the international segment was flat, and entertainment and licensing segment revenue jumped 24%.

Hasbro kicked off 2017 with robust results in the quarter. Catalysts for growth in the second quarter include the releases of powerful partner Disney's Guardians of the Galaxy Vol. 2 and Transformers: The Last Knight. Disney's Spider-Man: Homecoming should boost toy sales in the third quarter, while the releases of Disney's Thor: Ragnarok, My Little Pony: The Movie, and Disney's Star Wars: The Last Jedi should help power toy sales in the big fourth, or holiday, quarter.